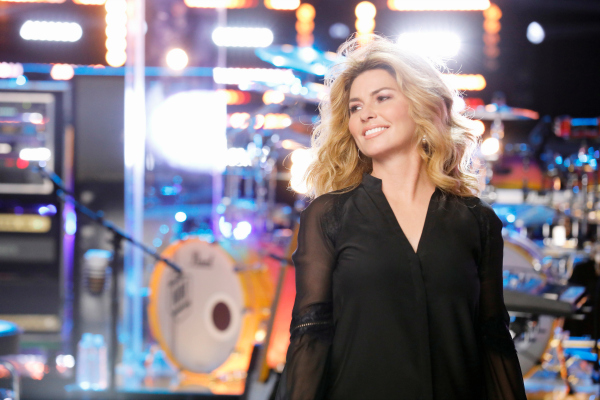 “The Voice” Top 12 artists performed on Monday night’s live show under the guidance of Country super-star Shania Twain. Twain has sold over 85 million records. She’s the best-selling female artist in the history of country music. Also, one of the best-selling music artists of all time.

After recovering from last week’s first live performance show of the season, followed by the first live elimination where TSoul and Aliyah were saved, the Top 12 artists put their hearts and souls into this week’s live performances. 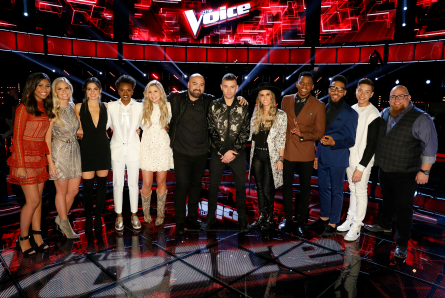 MARK ISAIAH (Team Adam) – Mark gave his own Caribbean-like spin on “One Dance” by Drake, featuring Kyla and Wizkid.

Shania Twain said Troy doesn’t “over sing.” Troy sang “Free Falling” by Tom Petty and the Heart Breakers. Twain said Troy makes the song his own and does the melody so beautifully. She called him a “true stylist.” Adam said he was hoping Troy would go into the big note because he can’t handle the song unless it’s there. He said Troy did, and he “really, really loved it.” Coach Gwen said aside from the performance, something about his personality came through and he was looser. “My favorite thing was the chorus.” Gwen added that she is happy she saved him. 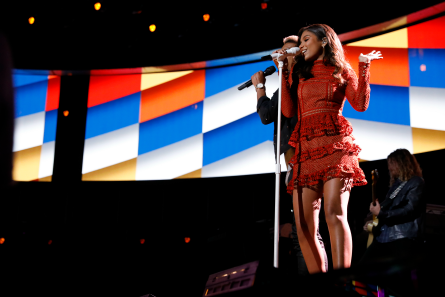 Aliyah, who was voted through last week, was super excited to see Shania Twain. Twain called Aliyah a “spit fire” and told her she started over-singing her song “Heat Wave” a bit. Twain said Aliyah took it all in stride and rocked it. Coach Blake said she blows him away every time she comes out on the stage. She’s a step closer to being a “complete artist.”

Shania Twain said she loves it when she hears someone talking about the story first. She advised Chris for this particular song, “Love and Happiness”, he has to “build” and sing with intent. Twain said of his performance, you can sing anything all day long, but you brought everyone to a real collective place and everyone exploded. Alicia said he has a real uncanny ability to make things electric. She said he made it a Chris Blue song. “Everyone in the audience could not stop clapping for you,” said Alicia.

Lauren was beside herself to meet Shania Twain who, she said, had a crucial role in who she wanted to be as an artist. After Lauren sang “Lord, I Hope this Day Is Good” by Lee Ann Womack, Twain remarked, “the song was so perfect for you. You have a honest spirit.” She added, Lauren could have written that song and heard the truth in her voice. Blake said “Country music fans, we have one here with Lauren. This is the artist that we’ve been waiting for. All this girl needs is a microphone and a Country song and she lights the place up.”

Coach Adam and Shania Twain had to talk to Lilli via video phone because Lilli was very sick. It appeared that Lilli was in a hospital. This is when Adam told Lilli she’d be singing Shania Twain song “Man, I Feel Like a Woman”. No pressure!

Twain said she herself is always conscious to not over-sing that song. Twain told Lilli that she really does have the sass and “it’s really fun to see in-person and a huge compliment.” Coach Adam said he’s amazed that Lilli is alive because she was so sick. Adam said he’s impressed that she was able to do that song in front of its original artist – Shania Twain.

To say that Brennley Brown was really excited to meet Shania Twain was an understatement. Brennley is the young country singer that Gwen stole from Team Blake. She sang “Long Long Time”. Twain said Brennely can go as Pop as she wants with it or as Country as she wants with it. She said Brennley is not limited. Twain advised Brennley that it’s all about the emotion and less is more. Twain said the technique was great all the way around and called it “as good as it gets.” Blake said Brennley ended-up with the right coach and called her singing a Linda Ronstadt song a “brilliant move.” Gwen said she spends her whole life thinking about Brennley – listening to Country songs to pick the right one.

TSoul got emotional while talking about last week’s show after Blake picked him again. He said no matter how many votes, it only takes one ‘yes’, referring to Blake’s Save Vote. TSoul sang Willie Nelson song “Always on My Mind”. He said Blake saving him makes him think even more that he deserves to be there. Twain said she felt his soul. “You really do put your soul into what you sing… You have true soul, voice and heart.” Coach Blake said “you’re looking at one extremely happy and proud coach right now. Blake said he admires how TSoul gets lost in his performance.

Hunter put his own spin on Gotye’s “Somebody That I Used to Know” featuring Kimbra. Twain complimented his nice control. Twain said Hunter has a beautiful, mild personality. But, when he began to sing she felt like she was at a “full blown concert.” Coach Gwen called it “exciting” to see him do something like that performance. He made that song, that song. “He’s such a creative creator, musician, everything.” 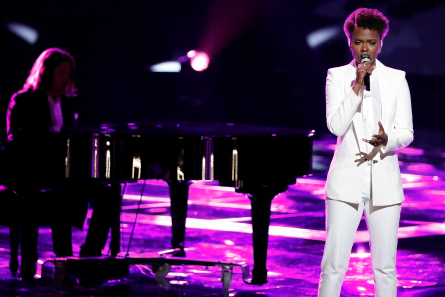 She sang Donny Hathaway’s version of “A Song for You”. Twain complimented her performance “pure class inside and out , and a sense of style inside and out as well.” She said it come out in her voice as well, said Twain. Alicia reacted no one just comes out and sings that song like that. “You are breaking down all these walls that is inside of us. If you want magic on this show, you vote for Vanessa,” Alicia advised viewers. 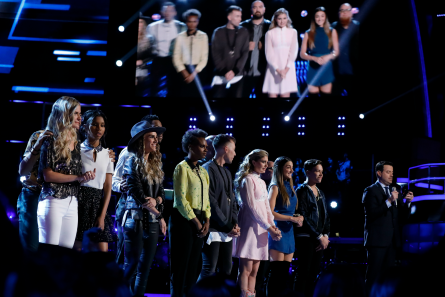 “The Voice” Top 12 artists soon learned their fate on Tuesday night’s Results show that would determine if they had won enough of America’s votes from their performances last night to continue on the show.

“The Voice” announced the winner of a Snapchat contest that they held. The winner was Ignatious who is 22 years old and was invited to “The Voice” stages. He was invited by Adam Levine to return next season for a Blind Audition.

The seven remaining artists were: TSoul, Mark, Lilli, Hunter, Stephanie, Troy, and Chris. Lilli said Blake stealing her has meant everything to her. Otherwise she would not be standing there.

Stephanie said she’d like to show a different side to her if she stays. Troy said Gwen is the perfect coach for him because she believes in him and saved him.

The last five were: TSoul, Stephanie, Troy, Hunter, and Mark. The next America’s save vote went to Team Gwen’s Hunter Plake. The next save was TSoul. That made Blake’s Team 100% saved. The last America’s Save vote pushed through Team Alicia’s Stephanie Rice. Alicia’s team all advanced. 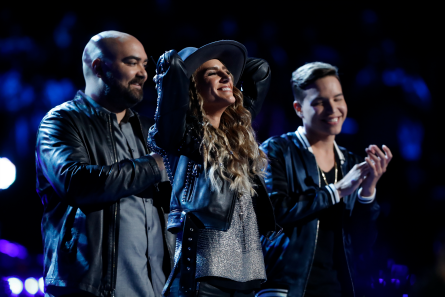 Mark and Troy were the bottom two who had to compete for the Instant Save vote.

Troy Ramey sang “Drift Away” for his Save Song. Blake said Troy has such a classic sounding voice and said he hopes that Troy will get to show the hilarious side of his personality. Gwen said it’s so easy and natural the way he sings and thinks that performance is enough to move on. Gwen said she does want to show more of his personality if he goes through and encouraged viewers to vote.

Mark Isaiah sang “If I Was Your Man” by Bruno Mars. Coach Adam said the choice he made to do that song is a testament that he should still be doing this (The Voice). “This kid is so young and on a mission to get better and better every day”, said Adam.

Before the commercial break after the voting polls opened, Mark was winning 52% of the votes, and Troy had 48% of the votes.

Troy thanked Gwen for bringing him as far as he’s gone. Mark said to Adam that he’s so happy to have the opportunity to work with Adam who is like a brother to him and glad that Adam sees the potential in him and said it’s only the beginning for him.

Gwen started tearing-up over Mark’s comments. She told Troy that she couldn’t believe that he picked her and said he’s a true artist and deserves to be there. “He’s so talented” she told every one.

Adam’s words to Mark was it’s really frustrating as a coach to see so much good in someone and the potential and talent. He said Mark is just reaching the tip of the iceberg to what he can do and knows how Mark’s story will unfold if he gets more weeks there to compete on “The Voice.” Adam also added that it will be a “loss” and a “miss” if Mark doesn’t go through.

The WINNER of the Instant Save vote was – Mark Isaiah!