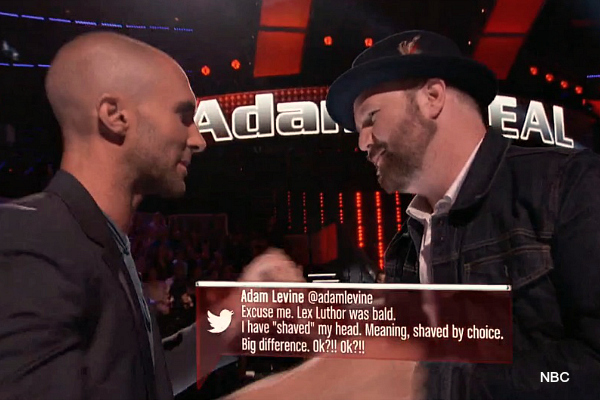 It was the first day of “The Voice” Battle rounds. Gwen Stefani said during the Battles, the coaches get to see the “best of the best”, and Adam said they get to see who’d progressing right in front of their eyes.

Each coach enlisted the help of another great artist to help guide the contestants during the rehearsal process of the Battle Rounds. Team Adam had John Fogerty who is one of his idol. Fogerty’s famous group is Creedence Clearwater Revival. Team Blake a real “The Voice” fan in Country super-star Brad Paisley. Team Gwen enlisted the help of Pop star Selena Gomez. Five Grammy Awards holding, Missy Elliot was at Pharrell’s disposal to prep his team for the Battles.

TEAM ADAM
Adam enlisted the help of member of the Rock-n-Roll Hall of Fame John Fogerty.

Exactly thirty years apart, Jordan is a 21-year old college student and Regina Love is 51 years old radio host. John said “a good song should make you feel something,” and they did that. They sang “Like I Can.” They two embraced at the end of their Battle.

Blake complimented Regina’s passion and control. He then asked Jordan “what the hell just came out of you?” Because it doesn’t make sense to him! Pharrell called it a “masterful performance” and their battle felt like “The jousting of ‘Game of Thrones.” Gwen called Regina effortless and Jordan “unexpected” which turns her on. Adam told Jordan to take that in! Adam told them they are powerful and incredible singers. The winner was Jordan. Adam called Jordan’s voice “the unicorn.” Gwen pushed her button to steal Regina and told her that she deserves to be on the show.

AFTER The Battle Interview & Reaction!

Tyler is 21-years-old who works at his Dad’s fencing company. Zach is a 16-year-old high school Junior. Blake gave them the song “I’m Gonna to Be Somebody” by Travis Tritt. Blake advised Zach to connect the the song and told Tyler not to act like he’s sung the song a million times before. Blake said the winner will whatever artist shows him they want to be somebody the most.

Pharrell and Gwen both said Tyler seemed so experienced. Gwen called Zach the “superman of singing.” Adam said Tyler threw some notes away because he is comfortable and needs that fire. He said Zach wants this really bad. Blake chose Zach as the winner.

They are both 26 years old. Ellie is an Indy Pop artist, and Tim is part of a band. Gwen gave them “Sweater Weather” to sing. Gwen had Tim lose his guitar which made him come to life more.

Adam said they both committed to the moment and neither one lacked passion. He voted for Tim for his compelling first moment on stage. Blake also went with Time for his original voice. Pharrell called them both gifted “great catches”. Gwen said if she was to listen to an album, she’d listen to a voice like Tim. Gwen chose Elle. Pharrell stole Tim because he said Tim was very possessive of the moment and was engaging. 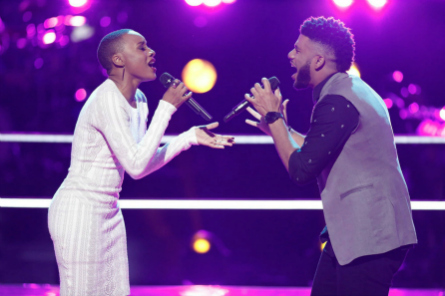 Celeste’s passion is gospel. Pharrell paired the two for their “soulful” sounds. He gave them the song ‘Ain’t No Mountain High Enough” by Marvin Gaye and Tammi Terrell. Pharrell wanted to see which artist would make him and Missy “feel” their performance. Missy said she felt like she was back in the ’70’s when “music felt good.” Missy cried because she said they made her feel as if she was in the presence of Marvin Gaye in Tami Terrell.

Gwen told Mark he had so much spirit that “the light is coming out.” Adam called him “electric” and “a spark plug”. He said Celeste’s tone is unique. Blake said either one of them could be a star. Pharrell said Ce choice of notes is like listening to a vocal Cirque du Soleil. He said Mark can move so much and sing at the same time. Pharrell said he made a mistake by putting them two together because he didn’t want to lose either one. Pharrell chose Mark because he said musically, he can do anything. Celeste sang her goodbye to coach Pharrell.

Dustin is a professional barber and James is motivated to support his four sons. They had the pressure of singing “Fortunate Son” by John Fogerty, in front of John Fogerty! Dustin gave a rock-and-roll voice and James’ voice was Americana said John. John took out a guitar and re-arranged the song for Dustin and James.

Blake said James was the more consistent singer although Dustin took more of a risk. Pharrell said Dustin showed more heart and James showed more precision. Gwen said Dustin’s stage performance was more electric but more captivated by James and called him “a real star.” Coach Adam said they executed everything they were advised. He said Dustin had a willingness to go for it. James is more composed whose voice “fills the room.” The winner was James. 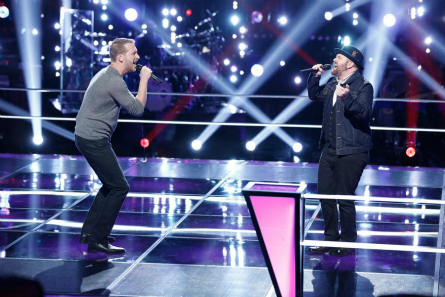 Barrett and Dustin are both 35-years-old. Teach and father Barrett went on “The Voice” to prove that he can overcome tragedy and pursue greatness. Dustin left business school to pursue music. Brad Paisley was their adviser. Blake gave them “Walking In Memphis” He said he wanted to see which one of them could “destroy the song.” Brad said the two strengthen each other, that they’re that good!

Pharrell told Dustin it a “phenomenal performance” and the way Barrett sings is a “big deal” and picked Barrett. Gwen said Barrett is incredible and Dustin’s voice is “crazy”. Adam said the fact that one of them will be available blows his mind and called Blake an idiot for putting them together. Coach Blake said it was idiotic to put them together. Blake said Barrett has “that thing that nobody can explain”, and Dustin destroyed the performance and his voice is “so special.” He said it was a tie, but the winner was Barrett. Both Adam and Gwen pushed their buttons to steal Dustin. Blake asked him is he going to pick Wonder Woman (Gwen) or Lex Luthor (Adam). He said it wasn’t a hard choice! But, Dustin picked Adam! 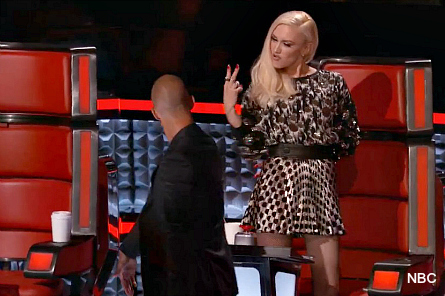 The Coaches have 2 steals each during the Battle Rounds. Coaches Adam, Pharrell, and Gwen each used one steal. Their line-up of advisers are: John Fogerty (Team Adam), Missy Elliot (Team Pharrell), Selena Gomez (Team Gwen), and Brad Paisley (Team Blake).

Keith is an Irish rocker looking for his big break, and got chair turns from Adam and Gwen. Manny is a fashion photographer looking to turn music into his full-time career at 45-years-old.

They sang “Baba O’Riley” (Teenage Wasteland) by The Who. John Fogerty told them that people will be comparing their voices to original artist Roger Daltery from “The Who”. Their Battle was more like a friendly duet. Blake said they were so good and that Keith stole Adam’s look. Pharrell said Manny could make an album right now that would be “timeless”. Gwen said it feels “natural” for Manny and Keith is a “natural star”. Adam said Manny is intimidating and “took full ownership.” The winner of the battle was Keith.

After The Battle Interview & Reaction!

Blake said Chris has the gift of sounding like he’s in pain and emotional. Brad told Chris when he gets too emotional to think of a shark attack. Brad Paisley ended-up re-writing his song, which was masculine, to fit Krista. Pharrell said Chris’ “chest voice” was “super-strong” and picked Chris. Gwen told Chris he was “soothing, rich and controlled” and they’re voice blended well together. She also chose Chris. Adam noticed that Kris “lost the reigns”. Blake told Krista she did a great job of taking a male song and finding places for her. Blake chose Chris as the winner.

TEAM GWEN
Her Battles were not shown in their entirety. Viewers were updated with snippets from the Battles of Alex vs. Kota Wade. Kota won the Battle; and Jeffrey Austin vs. Noah Jackson. Jeffrey won the Battle. 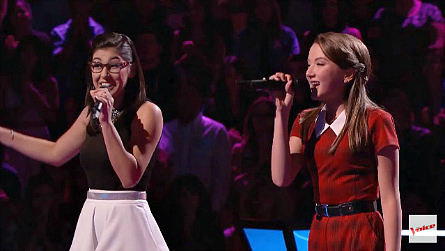 Ivonne and Siahna are the youngest members on Team Pharrell. Ivonne is 77-years-old and Siahna is 15-years-old. They both were wearing braces on their teeth during their Blind Auditions. Pharrell gave them Motown song “Keep Me Hangin’ On” by The Supremes, he said because the song “has character.” Pharrell advised Ivonne to “engage” and Siahna that he wants to “feel the threat” when she’s on stage. Pharrell said the person that he feels the most is the person he’ll choose.

Gwen said her favorite thing is seeing someone like Siahna coming out with a strong voice. Adam told Siahna that it looks like she was invented by a Pixar. Blake said Siahna at 15 is the worst she’s ever going to be and he’s ready to pick Ivonne because of her smile. He called it a tough battle. Coach Pharrell said he wanted Siahna to push on her bravado and Ivonne did a great job. The winner was Siahna.

Blake and Gwen pushed their buttons to steal Ivonne. Gwen told Ivonne that she was always meant to be on her team, and she’s lived her dream already and would “download” everything that she knows into Ivonne. Adam ran to Ivonne onstage and told her Gwen is an “angel” and Blake is the “devil”. Blake pointed out that him and Ivonne were both on the show last year. Ivonne chose Blake. She said she’s always wanted to work with Blake. Gwen reacted that it made no sense and was shocked.

A Team Pharrell Battle that wasn’t shown was Sydney Rhames vs Maddie Davis. Pharrell chose Maddie as the winner.

NEXT WEEK:
It’s the last week of the Battle Rounds.