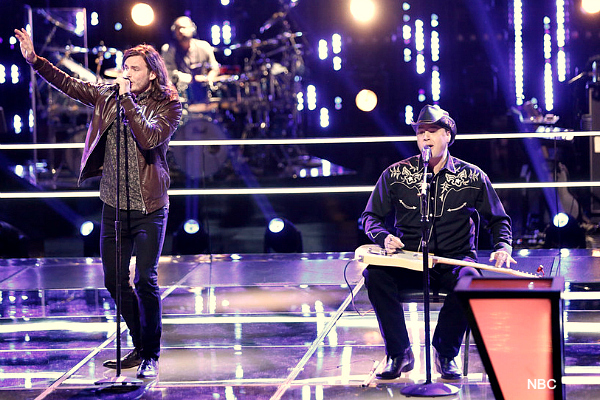 In night one of week two of “The Voice” Battle Rounds each coach had one steal left to place lucky artists on their teams. Team Blake scored Ivonne from Team Pharrell and Chance Pena from Team Adam. Gwen stole Regina Love from Team Adam, and Riley Biederer from Pharrell. Adam stole Dustin Christensen and Blaine Mitchell both from Team Blake!

Pharrell Williams stole Tim Atlas from Team Gwen. In night two of week two of the Battles Pharrell was the only coach left with a Steal slot.

Blind Joe said meeting and working with Brad Paisley was like a dream come true. Blake gave them “Old Time Rock and Roll”. By the last rehearsal, Blake said Blaine and Blind Joe are equal. Pharrell called Blaine exhilarating and said Blind Joe was “soulful” and went with him. Adam called their performance “awesome” and it felt bar room “brawley”. Blake said mission was accomplished because Adam (Stone Cold) said he wanted to get into a bar fight! Blake chose Blind Joe as the winner. 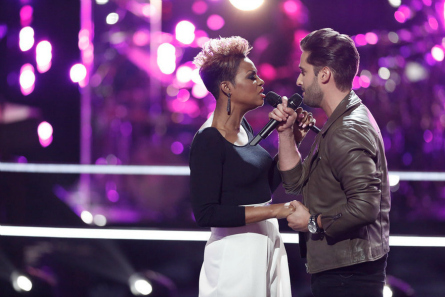 John Fogerty said Viktor sounds like there’s a story behind his singing. Adam advised them that “note wise” less is more. Adam gave them romantic song “Nobody Knows”. Blake said he felt like he was listening to a record and called Cassandra unbelievable and Viktor was impressive because he kept up with her. He went with Viktor. Pharrell said Viktor was amazing and Cassandra was effortless and her per was magical and undeniable. He chose her. Gwen said Viktor has a beautiful voice. Adam said Cassandra sounds and looks beautiful then joked Viktor is beautiful too but in a different way. He said they both executed it with passion and neither one of them could have done it better. He chose Viktor.

said her “brain is crying” when she saw Selena Gomez. “Samson” by Regina Spector Gwen said they are both emotional singers is why she gave them that song and would make people believe that they wrote it together. Korina said when she sings the song she thinks of high school and feeling hurt. Adam said he applauded Team Gwen for taking a risk for the soft song. He said Korin was “captivating” because she was able to be emotional and still on-pitch. Blake said the transitions made it feel emotional and Chase was really nailing it. Pharrell said the song wasn’t in Chase’s wheelhouse, but displayed what a great singer he is. Coach Gwen said they both touched her and Adam was “so wrong” about everything that he said. She chose Korin. 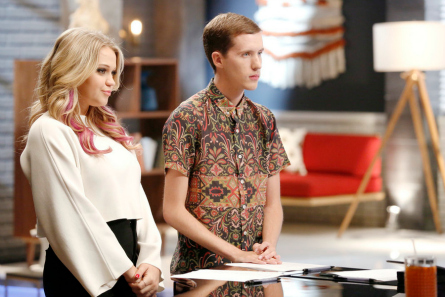 Twenty-year-old Evan wooed the judges in his Blind Audition with “Overjoy” song by Stevie Wonder. Riley, who is 19, created a viral music video of herself at age fifteen. Pharrell said he paired them because they are soulful singers. Pharrell gave them “Higher Ground” song by Stevie Wonder. Riley said Evan was one person that she did NOT want to Battle! Gwen said Evan’s voice in his body is so “magic” and Riley’s voice is rich. Adam said Evan pulled it off “unbelievably well” and they both had “huge triumphs”. Blake said Evan “destroyed” the performance, but Riley had the type of voice he’d recognize, but thought Evan won the battle. Coach Pharrell said Evan uses the entire stage and when he sings, he has a matrix in his head. The winner was Evan. Pharrell said he chose Evan because he’s done something that people haven’t seen before.

Braiden who is the youngest contestant this year at 15-years-old, joined a band at the age of nine. Gwen gave them “Nobody Else to Blame” song by Howard Jones. Gwen said because people who know this ’80s song will appreciate their fresh take on it. Lyndsey called Braiden a “powerhouse” and is prepared to step-up her game. Adviser Selena Gomez advised Braiden to have a moment where he genuinely looks at Lyndsey. Adam described their battle as a “tennis match” and told Gwen that she can’t go wrong with either one. Blake said Lyndsey took liberties throughout the song and one will break Gwen’s heart. Pharrell said Braiden has a unique tone, but didn’t use that tone, but colored the song with a sharp C. He called Lyndsey’s voice “seductive” and “mesmerizing.” Coach Gwen said Lyndsey’s star really came out tonight and it was incredible to work with Braiden. Gwen went with her heart and chose Braiden. Gwen called him a diamond in the rough and felt the need to take him on the journey.

23-year-old twins Andi and Alex went against 15-year old Chance Pena. Adam said he put them together because of the richness in Chance’s voice and the high voices of Andi & Alex. Adam gave the “Wherever You Will Go” song The Calling. Adam described them as sounding “pristine with rich beautiful chords and recommended that they listen to Lady Antebellum.

Blake said there’s something about sibling harmony and was still sour that they didn’t pick him as a coach. He said Chance wasn’t wearing sock because they blew his soaks off. He chose Chance. Pharrell said Andi & Alex walked in like two unicorns. But said Chance lead with his voice. Gwen called it “unbelievable and called it “candy” in her ears. She said if she was 15, she’d be losing her mind over him. Coach Adam said the sound that is create with the three of them is unreal and that a group should be formed with them. Adam chose Andi and Alex because they have the most “ethereal brilliance” to their style he said.

Adam gave them “Edge of Seventeen” song by Stevie Nicks. Adviser John Fogerty told them even if the timing is wrong, to just belt it out. Blake said Amanda has a rasp to her voice, very sand-papery and loves her voice. He said Shelby has the bigger, louder voice which is impressive. Pharrell said it’s impressive that they are both 17-years-old just belting the song out. Adam responded that is why he chose the song! Gwen said Amanda’s voice is really beautiful. Coach Adam thanked Shelby for “sassing it up”. And they both sound like “two pros”. The winner was Shelby. Adam said they were evenly matched, but Shelby was outside of her head. 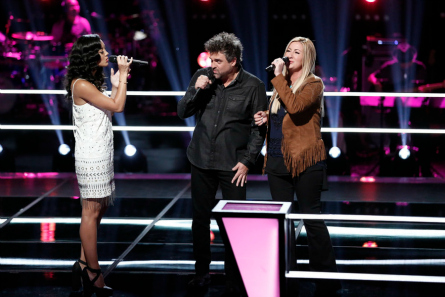 Amy Vachal is a 26-year-old waitress who gigs as much as she can, going up against duo 40-somethings Jubal & Amanda. Pharrell gave them “To Love Somebody” by the Bee Gees. Pharrell said when Jubal & Amanda sing together, it’s much more magical than when they sing separately. Adviser Missy Elliot asked Amy to sing it without the guitar. The result was that Amy “projected” Missy stated.

Gwen said “it was so beautiful” and Jubal and Amanda’s voices are so strong. She said Amy on her own is a star and looked like Pocahontas. Adam said it looked like Amy was the third wheel and there was no way for it NOT to be awkward. Blake said Jubal & Amanda are better now than their Blind Audition. Blake said he’s still hurt by Amy not picking him. Coach Pharrell said Amy has a way of making people feel alright when they listen to her. He chose Amy. 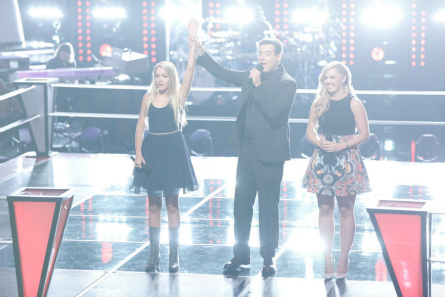 Morgan (16 years old) sold 30,000 copies of her own CD. Her Battle challenger, Emily is 22 years old and Morgan said she was intimidated by her being more experienced. Blake gave the girls, “I’m that kind of Girl” song by Patty Loveless He said because it’s in their wheelhouse. Pharrell said they did a good job. Gwen said the potential that Morgan has is unusual and Emily has more experience, but Morgan has more personality. Blake chose Emily Ann. He said for her being so young and so unique that he couldn’t pass on it. 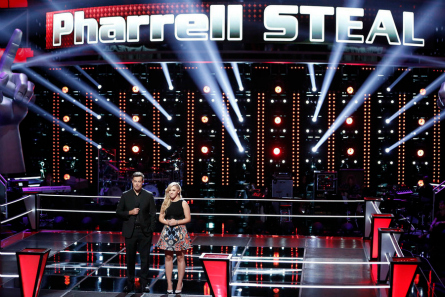 Team Blake’s Battle that went un-aired was: Nadjah Nicole vs. Cole Criske. The WINNER was Nadjah

NEXT WEEK:
KNOCK-OUT Rounds begin! The key adviser is Rihanna. The coaches will all each have one steal each again.