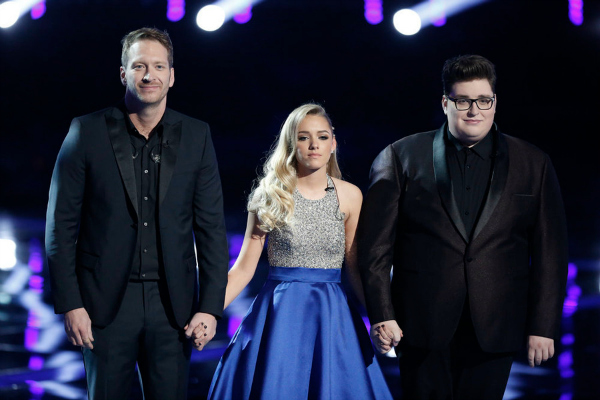 During Monday’s “The Voice” episode, each of the Top 4 remaining contestants sang three songs, one of which was a duet with their coaches.

The remaining artists were: Jordan Smith (Team Adam), Emily Ann Roberts and Barrett Baber, both from Team Blake, and Jeffery Austin from Team Gwen. Coach Pharrell Williams is out of the running with no contestants left when his last artist, Madi Davis went home last week. 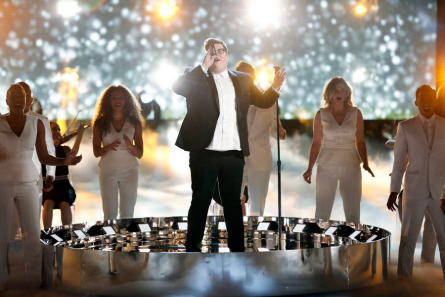 Jordan Smith has a five-week run of being number one on the iTunes charts. Jordan said he was working two jobs before “The Voice.” Adam called it the most suited finale song for Jordan was “Climb Every Mountain”. Jordan said he knows that if he’s not the winner of the Voice, he knows that he found himself, and this experience has changed him.

He sang with an orchestra behind him. Blake called him “consistently great every time he gets on the stage.” Pharrell said it was incredibly moving and fantastic. Gwen said Julie Andrews and that song are her favorite ever. Adam gushed over Jordan as well saying, Jordan’s belief in himself and humbleness is the most beautiful thing he’s seen.

Jordan sang his favorite Christmas song “Mary Did You Know”. Pharrell said “I just think the people are ready for you to make a record” I hope you dream is realized the proper way. He said to not become something else. “Just Jordan Smith.” Coach Adam said the song is so beautiful and was a last minute change. Adam had never heard of the song before. He said Jordan’s, not his choice song, was the right one for Jordan.

Barrett Baber sang Glen Campbell song “Like a Rhinestone Cowboy” which is about a country singer struggling to make it big. Barrett said the song is like his life – he took the scenic route which gave him his wife and kid. 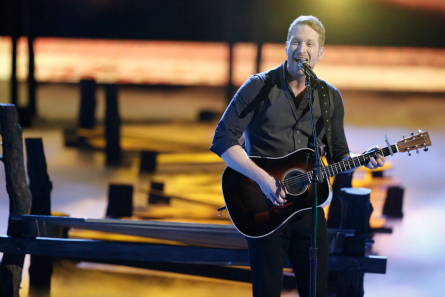 Barrett Baber went from teacher to student when he got on “The Voice.” Barrett sang a country song that had a country edge, “Die a Happy Man”, which Barrett says talks about what’s important to him. Gwen was crying at the end of his performance and said she feels she’s on a different planet. His “energy is so strong”, she said. Adam told Barrett it’s good to see his favorite people in the finale, because it’s usually not the case. Coach Blake said Barrett puts the most heart into his performances and he admires him for that.

Barrett sang “Silent Night” Pharrell said Barrett touches people every time he sings because he “sings his story.” Blake said there’s no one else on the radio who sounds like Barrett and expects he’ll hear him on the radio. 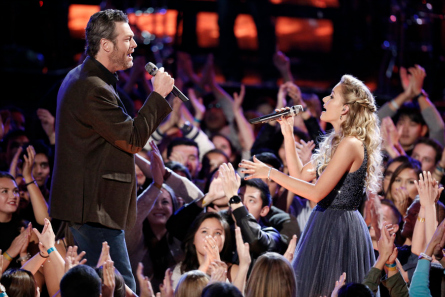 Emily Ann Roberts and her coach Blake Shelton performed “Islands in the Stream” by Dolly Parton and Kenny Rogers.

Emily Ann sang “Blue Christmas” by Elvis Presley. Pharrell said it’s crazy how classic Emily Ann’s voice is and looking forward to what she does with her career. Adam said they can tell what the “real deal” is, and Emily is the real deal. Coach Blake said she possess a vocal power and the best thing about her performance is that she ramps it up as the song builds and called her “ahead of her time.”

Blake recapped how much Emily has grown. When growing-up Emily idolized Dolly Parton. When Dolly was on “The Voice”, she gave Emily her stamp of approval which was everything for Emily. For the fist time, Emily sang a modern song, “Burning House”. Blake said Emily can be another Taylor Swift.

Gwen called Emily Ann really incredible that she already knows how to deliver the intent of the lyric at only 17! Pharrell called her “flawless.” Blake told her if anyone in this competition could have pulled an upset, it was that right there! 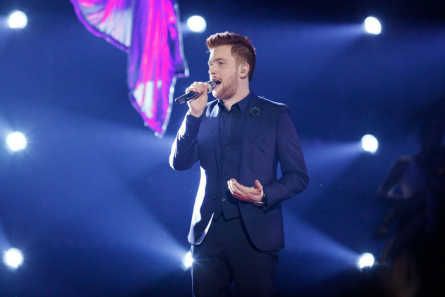 Jeffery Austin sang “O Holy Night”. Adam said Jeffery’s voice has a “sweet spot” and he really enjoyed it. Gwen told Jeffery that it was so beautiful and he deserves to be in the finale because he’s “so talented.”

Jeffery said he was too scared to audition at first and that he broke through emotionally during the Top 10 and doing Labyrinth is something he’d liked to do on his album.. He got a Tweet with emojis from Cher after singing “Love After Life” song on “The Voice.”

Jeffery sang “Stay”. Blake said he likes Jeffery doing country. Jeffery is the guy from the Blind Audition to now snuck-up on them, and each time he goes on stage makes more of a believer of all of them. Pharrell told Jeffery that the fact that he didn’t perform for six years, he must be inspiring others who have given-up. Gwen told Jeffery that he’s so incredible and will have a music career after the show and will be on the radio.

Gwen and Jeffery sang “Leather and Lace”. It was Gwen’s first time singing a duet with one of her artists made it to the finals. 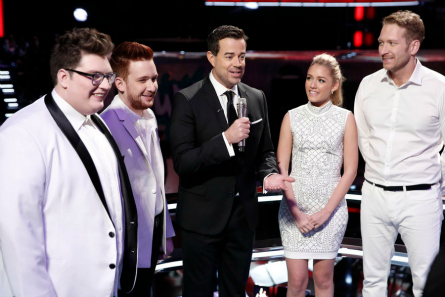 The Top 24 artists returned to perform the opening number. 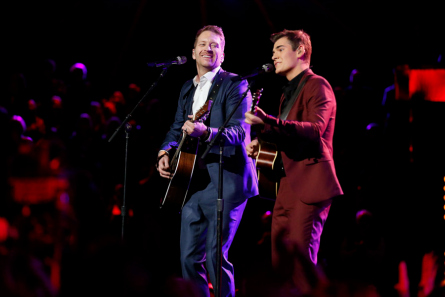 After the commercial break, Barrett Baber and Zach Seabaugh sang “Forever, and Ever Amen” by Randy Travis. 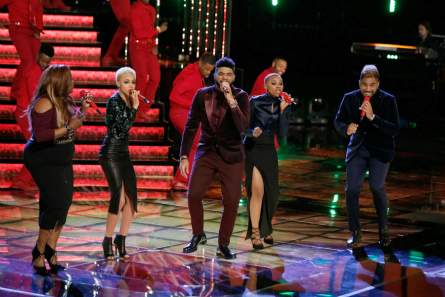 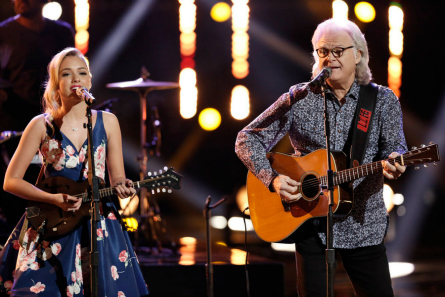 Then, OMG! “The Voice” welcomed country legend Ricky Skaggs who performed with Team Blake’s Emily Ann Roberts. Emily sounded a bit like Dolly Parton once again during this number. 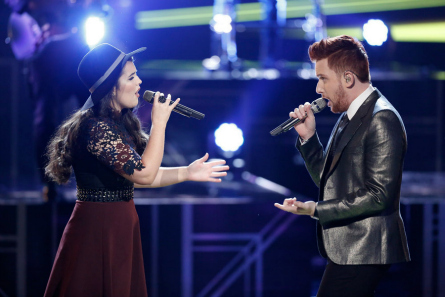 Jeffery Austin chose Madi Davis as his comeback artist to perform with. He said they are both inspired by Amy Winehouse and Madi knows more about singing at age 16 than he does at age 24. They sang “Tears Dry on Their Own.” 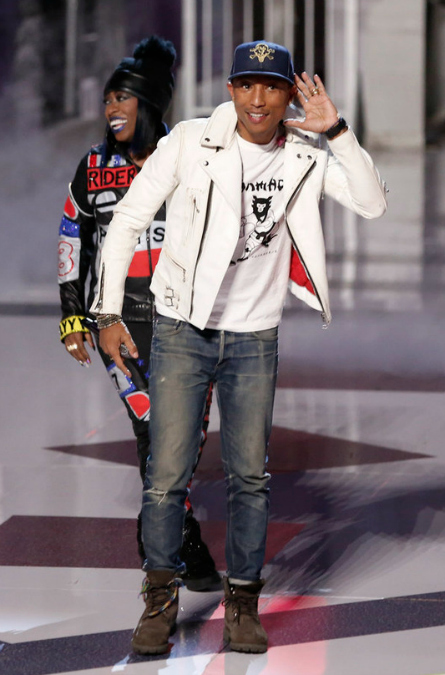 Missy Elliot joined Pharrell to perform “WTF” (Where They From).

Then, things really got good on stage when former ‘Voice coach Usher performed “Without You” with Jordan Smith! After that, Sam Hunt commanded “The Voice” stage with his “Break Up in a Small Town” song. 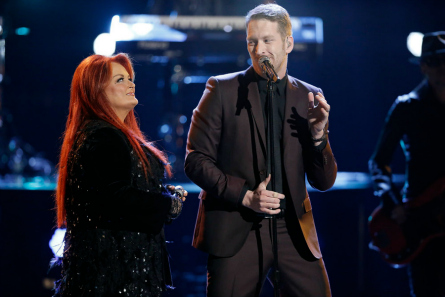 When Barrett Baber performed with Winona Judd it was kind of a big deal! Then Jeffery Austin complimented Tori Kelly nicely when they sang her song “Hollow”. 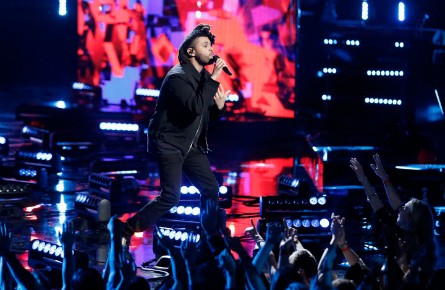 The Weekend amped-up the crowd when he performed a medley of three of his songs.

After Justin Bieber performed his newest hit song “Sorry”, and after a commercial break, host of “The Voice” Carson Daly brought the Top 4 artists out onto the stage to announce the winner of season 9. 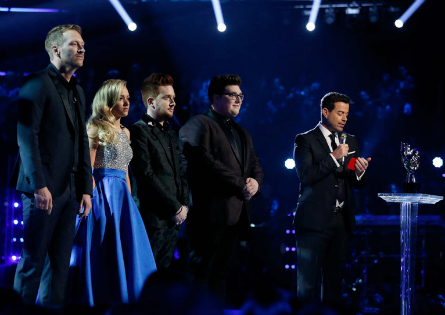 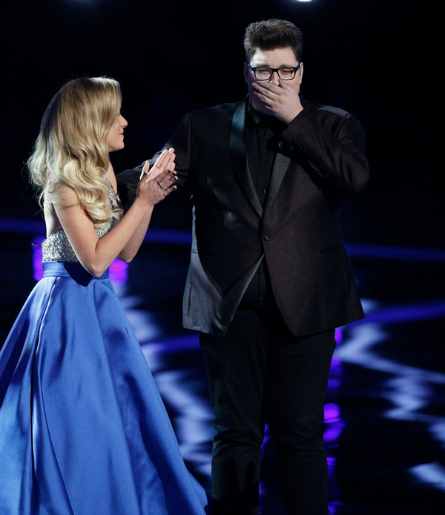