Do You Want To Live On The PROMISED LAND? 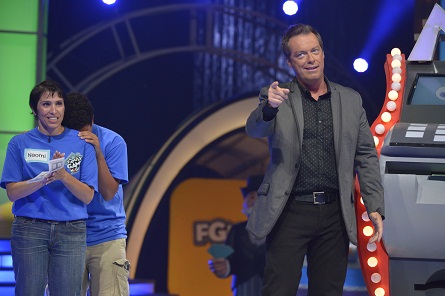 The new season of the Hub Network’s Hasbro board games turned larger than life sized is back with Emmy Award winning host Todd Newton, but minus announcer Burton Richardson. We asked why Richardson had not returned, and the circumstances were unclear. 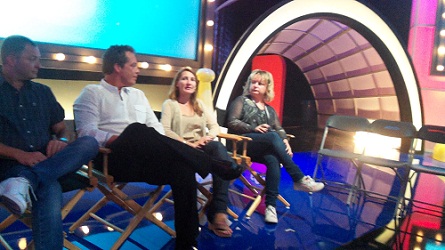 We got a chance to talk to Newton about his career, and Season 3 of “Family Game Night.” Newton said of the new process on the show where they now call players out directly from the audience to come an play on stage, “to call the contestants out from the audience takes it to the next level and beyond. So many of the great game shows from the history of the genre have pulled contestants right from the audience. Most notable ‘The Price is Right’. It creates just an incredible energy and anticipation. Any time you give more people the opportunity to play, the better.”

Newton also said that “most of our audience members are comprised of people that are fans of the show. Since we started ‘Family Game Night’ over two years ago, the whole concept has been lets create moments that matter for families. And lets do things that families can do together. We’ve really upped the family togetherness this season by including all different types of families and more families are playing.” Now there are six , seven, eight families playing in a single game.

Executive Producer Barry Poznick stated that families are given a packet of the game rules of all the games that are in rotation, a release form, then they’re given T-Shirts so they are all matching. They are shown videos that go over the rules with the families. “We want to give them the most success rate when they get here,” he said. For children to play, the minimum age is eight, the maximum age is sixteen. 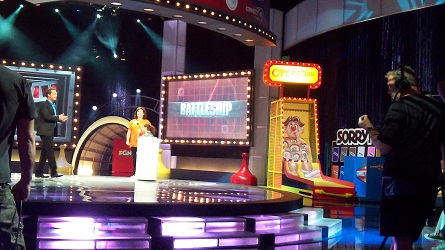 (Far Left) Todd Newton getting ready for a game of “Battleship”.

This season, “Family Game Night” is run slightly different behind the scenes. Last season, they taped four to five shows per day with the a fixed group of families that would all take a shot at the same game before moving on to the next one, allowing for higher energy coming from the players and audience. This season, the show is filmed more similar to real-time and family players are called out from the audience. Newton said that they film two to three shows per day now allowing him to finish around 6pm, versus 8 or 9pm last season.

Newton was almost absent the night that he won the Emmy due to being stuck in Penn State Station on the other side of the country. Executive Producer Kevin Belinkoff got him on a private flight to Los Angeles. He said that a bunch of offers came in for other hosting gigs after winning the Emmy, but nothing that has stuck. Newton said that winning the Emmy was the greatest moment of his professional career. “Any time you get a pat on the back or an adda-boy, it’s always nice. Hosting game shows is all that I’ve ever wanted to do. I tell my children, if you focus in on what you are passionate about, you can almost accomplish anything.” Newton said that he never wanted to be an actor. And that he thought that hosts like Bob Barker, Dick Clark, Johnny Carson, and Richard Dawson had the best job in the world because they got to be on TV but without being actors. Newton said from the fist moment that he walked onto his first game show set, “I never tuned it out. I never set my sights on anything else.” 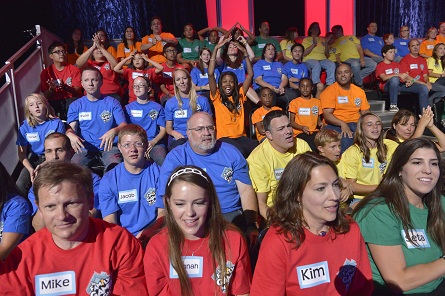 Families are selected from the audience to play “Family Game Night.”

Advice that Newton gives up-and-coming youths that are inspired to get into game show hosting at a time where networks are hiring celebrities, to just follow the career of other great hosts and start at a radio station. Working with great game show mentors throughout his years Newton said he learned that the host is not the star of the show, “the game is the star of the show.” He said what he loves the most about being a game show host is sharing the experiences with the contestants, as well as seeing the experiences through the contestants eyes and tries to channel into their excitement. He says this puts a whole different perspective on it.

His favorite tech gadget is his Macbook Air laptop which he states he can’t live without while traveling. And, his favorite game to play at home with his family is “Battleship” though he said he did not give any input of his own to the “Battleship” that is played on “Family Game Night.”

Newton wrote a book about is life in game shows called, “Life in the Bonus Round”. It’s available on his website. Soles for Soles – one dollar from Newton’s personal profit goes to this charity towards one child in Haiti getting a pair of shoes.