In this FOX network special sneak-peek to “The Masked Singer” season 4, fans learned a lot about what to expect this season. The show welcomed back host Nick Cannon along with the professional celebrity guessing panel – Ken Jeong, Nicole Scherzinger, Jenny McCarthy, and Robin Thicke. Nicole said the hardest part about being on the panel of the show “is not knowing”  who the celebs are behind the masks.

During this ‘Masked Singer season 4 sneak-peek, viewers got a little bit of behind-the-scenes tidbits on the creation of the costumes, and some show firsts. Two costumes will feature “The Masked Singer” logo. Hinting that maybe one of them is not only famous in front of the camera, but also perhaps behind the camera.

Some ‘Masked Singer firsts include a singing duo “Snow Owls,” the tallest combined contestant and costume in the “Giraffe.” The most impressive firsts come in the form of the “Jellyfish” costume which is the most delicate and glowing, and the “Serpent” costume which is the first costume to use animatronics. The most interesting costume has to be “Baby Alien.” This is the first costume that will completely hide the body type of the contestant.

In past season sneak-peeks, ‘The Masked Singer” show only exposed a handful of costumes before it’s premiere. This season, viewers got ALL 16 costumes! They are listed below.

1) POPCORN – The Popcorn costume is one of the most detailed. From the speaking voice and girly costume details, this contestant is female. Extra large CLUE: Biggest miracle of all.  “Not going to know who I am until the final credits roll on the final episode.” Could be – a younger female recording artist. 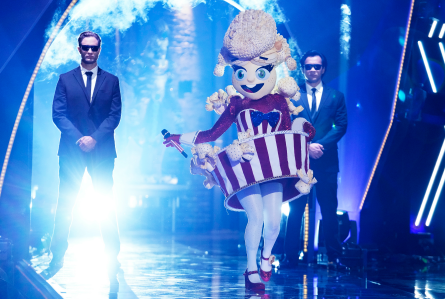 2) GIRAFFE – from the African Savanna is the Giraffe.  He said, “attacking my prey to get the mask trophy.”  At 8 feet, the Giraffe is the tallest on the show. One of the fanciest costumes in Masked Singer history.   A lot of bling was added on the costume to make Giraffe look like royalty.  Giraffe said, “sometimes when I’m performing I feel like I’m going to throw-up.  But, it would take too long.” CLUE: “I share something in common with a powerful giant.”  And, “to figure out my identity will be a real pain in the neck.” 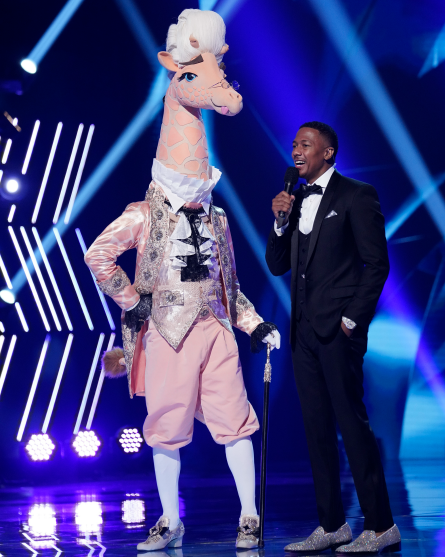 3) BROCCOLI  – “I keep your blood pumping and chalk full of vitamins.”  It’s the first costume to feature the Masked Singer logo.  The costume also has furry feet.  Broccoli stated, “I’m moving from a side dish to a main course meal.”   Broccoli stated that he’s a “lean mean pumping machine. After all its’ how I got my 6-pack.  Figuring out my identity is going to be roughage for you.”   Could be – Randy Savage, a.k.a “Macho Man.”

The show revisited some past contestants and last season’s winner. They were featured in interviews from their homes. Last season’s winner Kandi Burruss from “Real Housewives of Atlanta” as “Night Angel” costume, said it gets “super hot” in the costume.   The advice she gave to new contestants was to “remember you have to be able to get your character involved without having to move your face.” She said things like dancing help.

4) JELLYFISH – The competition is going to be so “jelly” when they hear me sing.  The costume has three inch platform heels.  It’s also one of the most delicate costumes in ‘Masked Singer history. CLUE:  “Even though I may be cold blooded, you can search the entire ocean motion of the ocean, but “I’ll go from Invertebrate to Inverte-great!”

5) SERPENT – He said he’s ready to slaughter his competition hard in this  Egyptian inspired costume.  This costume has animatronic arms.  CLUE: Here’s the prescription number to my identity.  Figuring-out my identity is a thing you just can’t win “Fangs for playing.”

Host Nick Cannon asked the judges what would their costumes be if they had to compete on the show. Nicole said she would be a sushi roll. Jenny said she’d be a cheeseburger because she’s “cheesy.” Ken Jeong said he would be a Marshmallow because it would be a comfy outfit to hang out in. Alan Thicke said he’d be “Hair.”  Ken Jeong joked and said “give it up for THE WIG!!”

6) DRAGON:  The Dragon is covered in red and gold. Dragon is ready to roar and soar and “show off my folk lord.”

8) SQUIGGLY MONSTER – This costume is 10 lbs.  Because of all the fur and no mesh where the costume mouth is, this costume has its own microphone inside. Squiggly Monster stated, “I get to be lovable while also being a wild child.” CLUE:  It’s fitting that I have so many appendages. I’m known for having a lot of hands to latch onto.

9) THE SUN – “I’m gold, I’m bold.  If anyone thinks they can rain on my parade they’re going to be burned by my voice.” The sun also said,  “We’ve all had periods of darkness, but my powerful rays have been known to peek behind the clouds.”  CLUE – this sun knows how to shine like a torch even during the freezing Winter.  My identity will never dawn on you. If you try to guess my identity, you’ll get burned.” Could be – an Olympian.

10) WATCHAMACALLIT  – Covered in red and blue hair.  Watchamacallit stated, “I’m going to win, win, win by the hairs on my chiny, chin, chin.” It’s the  hairiest costume ever on the show.  “I’ll be fine as long as I don’t wig out.”  CLUE:  some might say my career had a magical start (hinting to a magician).  “America is hair dying to figure me out.  Stop trying to figure out WHO I am, can somebody tell me what I am?  Oh, yeah, I’m Whatchamacallit.”

11) CROCODILE – Wearing a pink cape and a bow tie. This costume features ten thousand boa feathers.  Crocodile said, “I’m preparing to come out on top and chomp my competition.” and, my fans are going to be so excited to see me on The Masked Singer.” CLUE: “Tick Tack Toe, America, you’ve never met a crocodile like me.”

12) GREMLIN – Extreme amount of hair and fur on costume.   The Gremlin said, “you always have to make time for play and who’s more playful than a Gremiln.”  CLUE: I can thrive when the temperature is a cool 65.5 degrees.  When you hear my furious voice, you won’t believe your ears.”

13) MUSHROOM – “Watch out for me because I’m bound to grow on you. There’s only Mush-room for one at the top and that’s me.” One of the most detailed costumes in ‘Masked Singer history.   CLUE:  If you want to figure out what’s behind my mask, you’ll need to figure out who’s under my hat.  Figuring out who I am will be nothing by truffle.

14) SNOW OWLS – This is the first ever two-headed costume.  From their woodland habitat, it’s the Snow Owls.  They’re ready to ruffle feathers and show everyone that it takes two to make a dream come true. Covered in over two thousand custom beads, their costume also has over 40 thousand feathers.  The costume is mobile using handle bars and castor wheels. Snow owls said, “we’re here because performing on stage with someone else is always twice as nice.” It’s the first ever mobile costume in Masked Singer history.  CLUE: who’s more talented? It’s a tie! Who, who are we? Your heads will spin trying to figure us out. 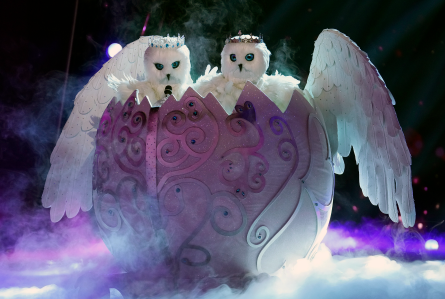 15) SEAHORSE:  I’m ready for some horseplay. Competition will have to stay out of my way. I’m a little shellfish.  “Singing on the Masked Singer stage is a little daunting but I can handle it…” CLUE: living in the ocean can be dangerous, always good to find a quiet place to hide.  America you’ll never figure out who I am even if you try your sea level best.

16) BABY ALIEN – “I’m a friendly UFO. If my competition thinks I look innocent, then Houston they have a problem.”  Some of the top puppeteers in the nation worked on this costume. Baby Alien costume has a custom ‘Masked Singer buckle.  This is the first time the body type is completely hidden.  Baby Alien said, “forget about the British Invasion my competitors are about to bow-down to Baby Alien Invasion. CLUE:  If you’re looking for a hint about this baby alien, all you have to do is look for the stars.  Trying to figure out this identifying flying object will leave you lost in space.