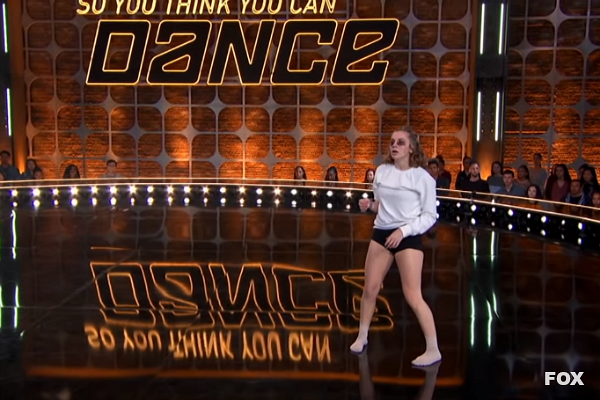 FOX’s summer dance show, “So You Think You Can Dance” season 16 is just getting warmed-up in week two of the Los Angeles auditions with some unique performances coming from dancers from all walks of life and showcasing their differences through dance. That included a couple of hip-hop dancers, a princess, and two pairs of couples auditioning together.

Sumi currently lives in Los Angeles and escaped a not so good environment where she used to steal.  Sumi’s performance was lockin and poppin hip-hop. Laurieann called Sumi “a bad girl” after her audition and followed-up by stating it was “phenomenal.”  She said she never seen a Japanese chick break like that.  Dtrix said the control was unbelievable.  Mary told her what she did “just blew me away.” Nigel told Sumi “you’re a thief.  You’ve stolen our hearts today.” All the judges voted to put Sumi through to the next round.  Dtrix added that Sumi is his favorite hip-hop girl so far.

She started dancing around the age of nine.  Her family members are supportive except for her father.  Mary could relate in that her father also didn’t support her in the beginning and didn’t talk to her for two years, then turned it around.

Mary reacted that there’s so much “fight” in her dancing and she needed to back off a bit.  Nigel said she danced with angst and he needs to see more from her.  Laurieann disagreed and called her a fighter and can fight.  She also said “you make me feel something.”  Dtrixl agreed and the “execution was shaky.”  Mary told her that her father will be very proud of her and voted “yes” to see what more she can do.  Nigel and Laurieann voted “yes.”  Dtrix had the deciding vote.  He gave her the third “yes” vote she needd to move-on..

Samuel is a B-Boy and brought his young three-year-old son, Koa, who opened his Dad’s audition with some breakin’ moves of his own.  Nigel put his son through to the Academy.  After Samuel’s audition, Nigel said some of his moves are fascinating but is afraid that a Cha Cha move might look wrong on him.  Laurieann stated that Samuel says so much while he’s still. Dtrix said it was nice to see so much authenticity and said “great job.”  Mrary told him he’s an amazing entertainer with a good amount of variety in his audition.  All the judges vote “yes.”   Afterwards, Nigel said he loved to see that a dad is passing dance down to his son.

Gianna said acting is important to tell a story. Her audition was about being kidnapped. Her dance style was similar to past contestant and winner Melanie Moore.  Mary stated that “someone found a dark side. What was that about?” Mary joked that it was a forensics file. But her performance was wonderful and called her “dynamo.”  Nigel said she may have lost her voice but spoke very loud with her dance.  Laurieann told Gianna she had come and raised the bar even more, “well done.’  Dtrix told her to do more of that.  They all voted “yes” for Gianna to move on to the Academy.

They are a pair that have been dancing for only two years. Dtrix said he was ‘throughly entertained from beginning to end.” and looked like they had been dancing together their whole lives.  Laurieann said they only hope and pray to be that effortless in ballroom dancing. Nigel said it was great to watch and loved it after givnting them a bit of advice.  Mary said he presented his partner in the best possible way.  “Your foot-work and leg action were stunning,” she added.  Then she put them on the Hot Tamale train

Korra is 26-years-old from Nigeria.  She’s part of the royal family there and is a princess.  Her famiily wanted her to go into banking. However, she wantd to dance. Korra met her current husband in dance class here in the United States.  Her life goal is to create a shift in her people and wants to show other Nigerian women that they can do anything they put their minds to, “pregnant or not,” which she was. Thus, Korra danced her audition while pregnant.  The judges’ jaws dropped when Korra did the splits.   Dtrix said he’s so happy that she didn’t start break dancing.  He was blown away.   Mary said Korra is “one fierce woman.  Nigel said he enjoyed it and it shocked him.  It was a “no” from him, although he found her inspiring.  Laurieann and the rest of the judges also voted “no.” Mary said she knows Korra will be back.

Kaeli and Brandon were the second pairing of the night to audition together. They met at ages seven and eight.  When they arrived to the SYTYCD stage holding hands, Nigel asked if they are a couple.  The two immediately set it straight with Nigel that they are NOT a couple.  Nigel said he loved every moment of their audition.  Laurieann said it was like two torn Tornadoes circling and coming together.  Dtrix said he couldn’t choose and going back and forth between both of them. “Individually and together, you guys are great!”  Mary called them “magnificent” and they were “amazing!”  The judges all gave them tickets to the Academy.  Nigel said it “wowed” not just the judges, but the entire audience.