The Cast and Film Makers Reflect ‘Timeless Music’ – NOT FADE AWAY 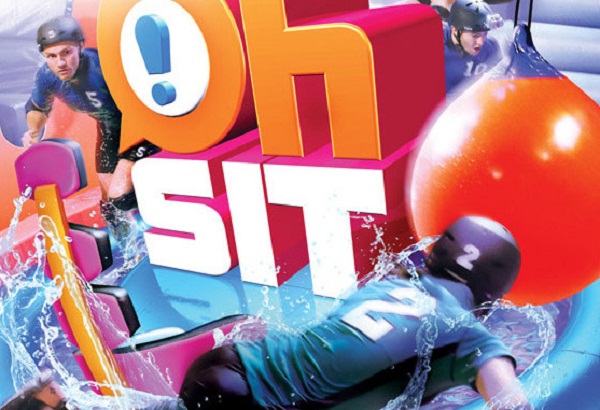 EXCLUSIVE! Set Report!
The CW network is bringing it’s sittiest show back with some foreseen changes. “Oh Sit” is the game show that combines unconventional obstacle courses with water and a moat. The last player to make it to center stage, bypassing the moat hurdles without seated in a chair gets eliminated.

The first season of “Oh Sit” featured Jamie Kennedy and Jessie Cruickshank as hosts. This time around, the set was free of the two (a blessing) and only had Frank Nicotero as a commentator. It was said by the show’s audience warm-up host that Jamie and Jessie would be filming their dialogue off-stage in front of a green screen in which the action on the stage would be added later. That didn’t keep Jamie from stopping by to say “hi” to the audience. He said, “This is going to be our biggest season yet. Keep sitting. I’ll be back.” He never came back. Tanika Ray is still the sideline interviewer, and was also present on-set. 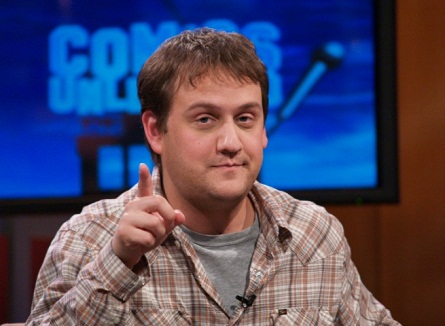 This new format worked out best for the filming time which ran smoother and for audience members who were constantly annoyed by Jamie’s comments and antics last season. “Oh Sit” also shot multiple episodes at once by using the same course on different sets of contestants before switching each course out.

That’s Some Bullsit!:
The scoring of the contestants is questionable at best. But when other factors play into it – such as the set itself that is no fault to the contestants’ then we have to say that is some “bullsit”. How the scoring works is the first round starts with twelve players who must tackle obstacles on a 360 degree round track to a “live” lip-syncing band playing on a separate stage. They earn points per obstacle they successfully overcome. 100 points the first round, 150 points in the second round, and 200 points in the third round. When the band stops playing, each contestant must finish whatever obstacle they are on at the time then race to one of three bridges over a water-filled moat connecting to the center stage with chairs. Which ever player is left without a chair, is out of the game.

Each chair is worth a different dollar amount. These amounts are electronically displayed on the head-rests of the chairs once every contestants is seated. The points earned from the obstacles along with the chair dollar amounts dictates where each contestant stands in the games. The player with the lowest number in the first round is also eliminated.

Now- we have a problem with the electronic numbers that appear on the chairs. How do we know these numbers aren’t selected on a whim as to who producers want to stay and who they want to go? Not only that, but when the actual set starts falling apart and costs a contestant their chance at claiming a chair, that is just wrong.

One female player had made it across a bridge and grabbed hold of the center stage to hoist herself up – as many contestants do. A piece of the side of the stage broke off and she was unable to complete the game. She was eliminated. No one ever acknowledged that it was a faulty of the set. That is bullsit! 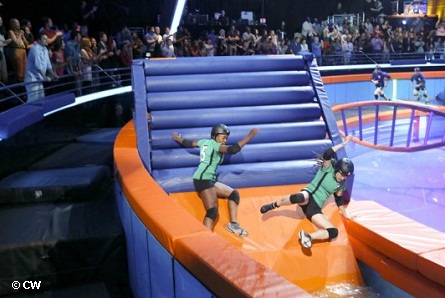 One of many “Oh Sit” obstacles.

Sit Happens!:
“Oh Sit”, like ABC’s “Wipeout” is a physical game not free of the occasional casualty. During one hurdle that a female contestant leaped over, she fell in between the mat and the concrete ground. Her ankle was affected where she could not continue to play. Soon after that, a male contestant was seen limping and had to also forfeit his game.

One contestant was first eliminated, then called back. We’re not sure what the mix-up was. It had something to do with how he completed a stunt. Another contestant received continued audience boos when he kept pushing his opponents into the moat of water. Though there are guidelines, it’s actually okay to push contestants on this show.

Oh Sit All Star Referee Cast!:
Aside from the celebrity hosts, “Oh Sit” also has some familiar faces who are the referees. Kit Kat is a first division women’s referee. Jake or, a.k.a. “175” (nick-named this based on his new weight. Yeah, he weighs 175 lbs. In the previous season, he said he was at 187 lbs.) has been on six health magazine covers. Lauren was a contestant on a past NBC game show, “Minute to Win It”. Tye is a former NFL player.

Oh Sit Jargon!:
The audience seating area is called “Sit Arena”. The round center stage where contestants vie for a seat in a chair is called “Sit Island”. The name of the house band is called F.O.S. for “Full of Sit”. 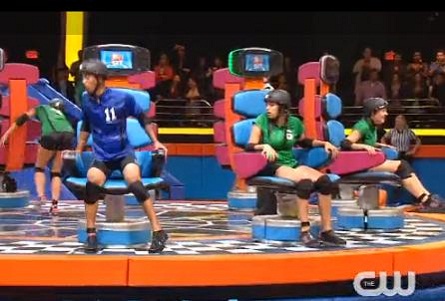