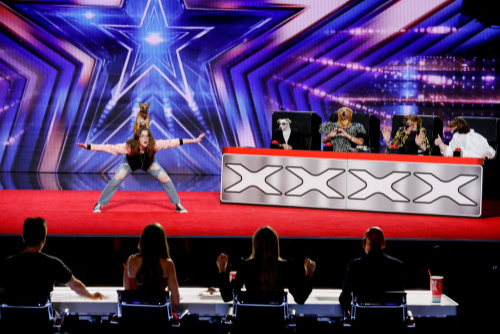 Simon said “I actually don’t think I can do this anymore.” Then caved to a “yes” vote.

After finishing off last year with an outdoor finale (due to Covid restrictions) and before that, the judges watched streamed acts via large monitor screens, America’s biggest talent show, “America’s Got Talent” (AGT) returned to their auditions venue at the Pasadena Civic Center to judge a slew of new acts for season 16.  Well, almost all the acts were new.
Some of the acts so far this season included the always likeable dog act, comedians, aerial artist, magic, and singers.  The judges did not enter via their typical route from past seasons which is down the main isle ways where the audience stands and cheers their arrivals.  Instead, judges Simon Cowell, Heidi Klum, Sofia Vergara, and Howie Mandel entered from behind the stage then ascended to their seats behind their judging panel table.  And, yes, the Golden Buzzer remains!

The Canine Stars performed a spoof of the AGT judges by having dogs represent each judge, wearing similar clothing as them, sitting behind a table.  These dog judges judged two other dog acts that came out in front of them.  The first one, not so good.  The second one, they were so impressed that they gave the act the Golden Buzzer.  The real judges actually loved the act and put them through to the next round.

Ten-year-old Peter came out and blew the judges away singing Celine Dion’s “All By Myself.”  Peter said he’s from the Philippines.  Sofia asked what he does for a living.  Peter answered that he sings.  He got a standing ovation from the judges.  Howie called him “amazing” and he’s “so cute.”  Heidi said he’s incredible and asked what his neighbors say when they hear him rehearse?  He answered that they were surprised.  She said Miriah better watch out.  Simon called it an incredible audition that parts of the song gave him “goosebumps”  Simon said Peter has an amazing personality, amazing voice.  He got all “yes” votes.

Aidan, who is 16-years-old, performed a pro-level aerial routine.  He is self-taught, learning from YouTube videos.  He stated that he used his grandma’s bed sheets in a tree to try it for the first time.  The crowd roared with cheers after Aidan’s performance. The judges were so impressed by him.  Sofia said she would have thought that he came from a family of aerialists because his act was that good.  Aidan was voted to the next round. 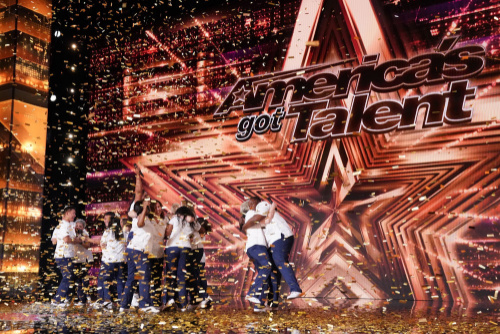 They are all members of the Northwell Health nurse choir and are all frontline workers from New York  They all agree that nursing was their destiny.  They said during Covid, they were so scared.  “the hardest part was seeing these patients alone…we stepped in as their family.”  The one thing that is bringing them light and hope is music, said onem member.   Another member said, “this choir has actually been a  beacon of hope for us.”
They stood in front of the judges and said their choir is made up of 18 nurses out of 18,000 nurses in New York and part of the largest health system.  They’re hoping to “shoot out some joy..some love” and they’ve found their resilience and “hoping they find resilience as well.”  They sang “Stand by Me.”

Simon said “we need you.  The whole world needs you. He said he’s going to remember this audition.  Sofia called it dynamic, perfection.” Heidi got chills watching it and loved the words to the song. “That we all have to lean on each other.”  Howie called it “heroic..and what a perfect song.  Stand by me.  You stand by people you don’t know. ”  Then he got out and stated that he wanted to stand by them “over here” as he moved over in front of the Golden Buzzer.  This was the first act of the season to receive the Golden Buzzer, sending them straight to the live shows!!  Howie joined them on stage (from afar) to blow them an air kiss and told them that they are the most inspiring moment he’s had in he last year and “thank you.”

Keith is 35-years-old from Rhode Island and lives with his mom. He said his talent consists of him doing not dancing, but “bodily maneuvers.”  He explains them as “a sequence of rhythmic spasms.”  Ketih loves video game music so much he could not, not move to it and this is  how he started dancing.   His act followed a jello wrestler.  Keith’s “dance” moves included the caterpillar, a lot of bouncing around, then ended his act with a bang by falling off of the stage! He bounced back up to show he was okay and most likely the fall was part of his act.
Simon said it was amazing and said he’d rather watch him than the ballet.  Howie said “you’re a surprise.”  He then started to break-down. Simon was his first “Yes”,  Sofia his second, then Heidi threw her “yes” vote in.  Howie’s vote was also a “yes” too.

Gerald said during the pandemic, he started doing comedy in the backyard where neighbors were his audience.  He said he made a few bucks to pay the bills and take care of his kids.  Howie told him the moment he walked out he was really likeable and he has great timing.  But, he didn’t like the material as much as he liked him.  Howie told Gerald he’s lovable and liked what he did. Simon said he started off strong, but didn’t have that dynamic end. He said he thinks that viewers will like him.  Howie, Sofia, and Heidi said “yes.”  Simon said a million percent, “yes.”    Simon and Howie said they could tell Gerald was nervous.

Hunter is seven years old and his act followed after his Dad Gerald.  Hunter said he wants to be a comedian because his dad is a comedian. He said he’s better than his dad and is going to be the first comedian to win AGT.  Hunter said he thinks his dad “needs more personality” and he got four ‘yeses “because I helped him!”
In his standup routine, Hunter said his favorite comedian is Kevin Hart – “we’re both funny and we’re the same height.”   Sofia called Hunter “the most adorable thing she’s seen in a long time.”   Howie addressed the moment on stage when Hunter went blank and had to pause.  Howie said he goes blank all the time, and Hunter handled it like a pro when he kept going.  Heidi said she can’t wait to see him go head-to-head in the competition with his Dad.  Simon was blown away because Hunter is the same age as his son. Hunter indeed also got four “yes” votes. 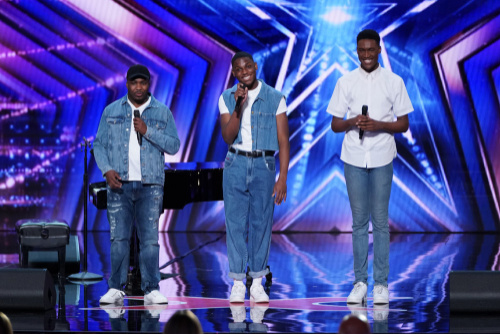 This trio of young men met a month and a half ago while sitting at the same table inside their school cafeteria.  They inspired each other by loving the same artists and decided to start singing together.  They said the lunch ladies came out and encouraged them to keep singing.  They sang “Fix You” by Coldplay for their AGT audition.
Sofia was amazed how well they sounded together for only knowing each other for a small amount of time.  Howie said he felt like he was at church.  It sounds like they were more than a three man choir, he commented.  Simon said everything fell into place with them.  They got all “yes” votes. 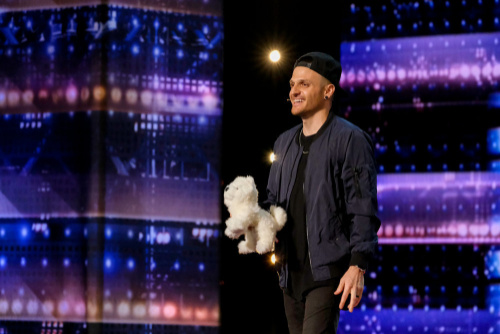 Dustin is from Virginia Beach.  His wife and son were waiting to the side of the stage while he performed his magic act.  Before the show, Dustin said he emailed Terry Crews some photos.  Terry pulled those up on his phone.  But, ,was asked not to open the email yet.   At the start of his act, Dustin explained two kinds of magic.  The second kind is when one individual decides to  make a positive impact on someone’s life.  “This is the most powerful magic that exists,” stated Dustin.
Dustin then asked Heidi to shuffle some cards, then cut the cards and hold one half to her chest not looking at them.  Sofia had a calendar for the month of February 2020 and was asked to mark any date in that month.  Howie wrote down the random last name “Smith.”  Simon wrote down a random time.  None of these Dustin saw.  Dustin revealed that he and his wife adopted their son Zander when he was two months old on the date that matched the date Sofia picked on the calendar.  Every judge chose a detail that matched Zander’s adoption day.
Simon was blown-away when he saw that he wrote-down the same time shown in the courtroom photo.  Dustin said the second kind of magic is when someone makes a decision to change the path of someone else’s life which is what Zander’s birth mother did.  She was shown in a photo holding a sign with the word “power.”  It was also the word the host Terry Crews chose.
Simon pointed to Dustin as for anyone who doesn’t believe in magic…”Hello!”  Dustin received all four “yes” votes.

Sethward is 32-years-old.  It’s his fourth time being on AGT.  In the past, he came out on the AGT stage dressed in various costumes that included:  a caterpillar, a giraffe, and a Walrus.  He said after his stint on the show, the community that banded around him was great and it gave him the confidence to keep coming back.  Sethward said a big task is showing the judges something that they’ve never seen before. He said “if I can get past this round, the sky’s the limit.”
After his descent from the stage ceiling dressed in a full-on peacock costume,  Simon asked his name.  He said “Seth the peacock.”  Then Simon realized who he was.  Noticing new judge Sofia, Sethward did a dance to flirt with her, then lost his tail feathers.  He said “don’t look at me.  Turn around!”  Then he picked up his feathers and continued to dance.
Heidi called the act “a hot mess.”  Sethward asked her, “the good kind?”  When judging his act, Howie and Sofia said “yes.”  Heidi tossed her vote to the audience.  They loved him and she said “yes.”  Simon said “I actually don’t think I can do this anymore.” Then caved to a “yes” vote.  Perhaps it was also the fact that Sethward came as a peacock this time, the mascot for NBC.
AMERICA’S GOT TALENT airs Tuesdays at 8 pm PT on NBC network.  Check your local listings.