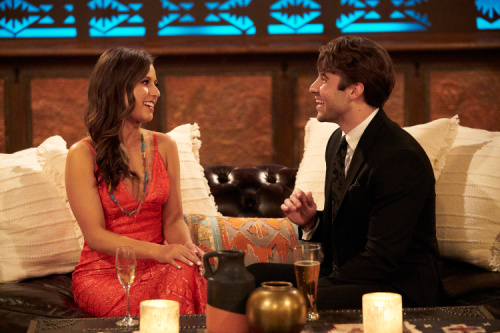 This season ‘s “The Bachelorette,” Katie Thurston, began her journey in Seattle, Washington when she got the phone call of being the next ‘Bachelorette.  Katie explained that she never saw a healthy relationship of love because her parents were divorced when she was a baby.  She said she grew up “very poor” and went to five different elementary schools which made making friends “very hard.”

Katie said she’s happy where she’s at right now, and “I’m not going to settle…It still feels unreal to be here.”  Katie promised to still be who she is.   She said she can feel that she’s going to meet her soulmate on”The Bachelorette.”

Katie has thirty men to choose from this season.  New hosts, and former ‘Bachelorette’s Tayshia Adams and Kaitlyn Bristowe awaited Katie’s arrival in front of the a new mansion in the desert. 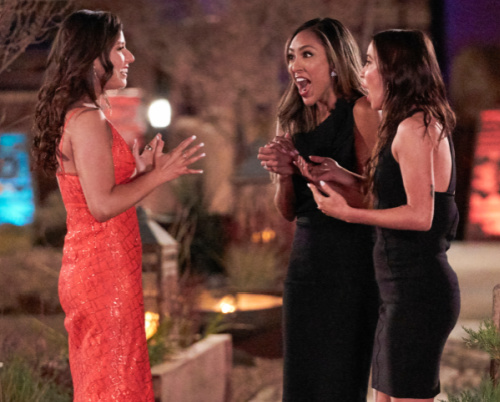 Men whose backstories were shown in featured videos were:
Connor B. is 29-years-old from Nashville, Tennessee.  He’s a Math teacher and a musician.  Connor said he was hoping that Katie would be the Bachelorette because she stands up for what she believes and she is confident and pretty.

Karl Smith is a 34-year-old motivational speaker.  He lives near the beach.  He’s the only one of his family members not yet married.

Brendon is 26, from Canada.  His passion is becoming a full time firefighter.  He likes that Katie is a strong woman and his ultimate goal is getting down on one knee for Katie.

Andrew S.  is 26, and a football player.  He said  Katie has a beautiful smile and an infectious personality.

Mike, 31  Got drafted into baseball at age 19.   He said hes waiting for marriage to have sex.  “Nothing wrong with being sex positive.

Justin, 26- He’s been drawing and painting since age 6.  He painted roses for Kaite.
Tre, 26 software engineer.  Says he’s well-rounded and his parents have been married for 27 years.  Tre said he’s a sensitive guy and not afraid to show emotions. He likes that Kaite is confident and doesn’t hide her true feelings.

Greg is 27, and lives in New York.  He is the youngest of four.  He said his family is growing with everyone having babies.  Greg said he has a ton of nieces and nephews .  He’s not afraid of an engagement and is hoping to find the love of his life.

While riding up in her limo, Katie expected to be on her own, without the help of host Chris Harrison and said she wished there was someone there to answer her questions.  As Katie stood there in the desert front of the house alone, Tayshia and Kaitlyn sneaked-up behind her.  Kaite was ecstatic to see them and relieved!  She got to go inside to chat with them and ask questions.

Katlyn advised – “don’t rule any of them out night one.”  Katie said she doesn’t have an appearance type.  All of her past boyfriends look different.  Katie is also looking for “a grown-ass man.”

Kaitlyn and Tayshia went back inside to watch the arrival of the men from a window.  So, viewers got to enjoy this traditional act  commonly seen in “The Bachelor ” shows when the women watch for the arrival of the other women while spewing sideline like commentary. 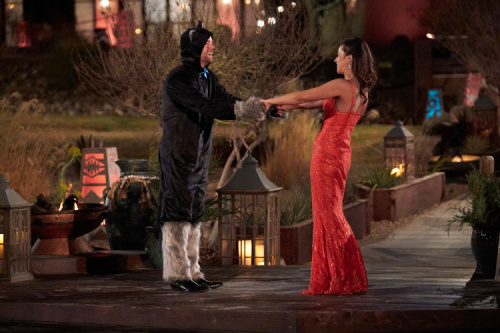 Thomas, 38, Real estate Broker was the first man to get out of the first limo.  Aaron 26, Insurance Agent, then Andrew M, district Attorney.   David, 27 was next.  Business owner Michael who’s 26-years-old.  He brought her a family heirloom, a watch…then said he was kidding.  The point is that “time is precious, and hopes that she gets to spend it with people she cares about.

A truck pulled-up next.  Tre jumped out from the back of the truck which was filled with balls.  “Balls of energy”

Greg, 27, was next.  There was immediate chemistry between Katie and Greg and when he said he was happy that she’s the ‘Bachelorette, it seemed authentic.  Gabriel 31, who is an entrepreneur was next.  He shared one of his favorite hugs with Katie which involved closeness and heavy breathing.  John, who is 27, arrived.  After he left Katie said he’s her type.   Garrett, 29 was next.

Quartney, 26, said getting to meet her was worth the quarantine.  Then a guy (Conner B.) arrived in a catsuit.  He said “it’s so mice to finally meet you.  Connor B. is a 29-year-old math teacher.  He said he heard that she’s a huge cat lover.  Katie loved the gesture.  She said she;s a crazy cat lady and he gets her sense of humor, Katie stated.

After all the men had arrived, Tayshia and Kaitlyn reconvened to give more advice.  Katie said she was still stuck on Connor B, the catsuit guy!

She told the guys that “tonight is scary ” and didn’t want to give a prepared speech because she wanted to be herself.  All that she asked was for them to be themselves as well.  She toasted to “love” with a raised glass with the guys.

Katie said she’s ready to be engaged and believes in the process.  Katie said she found herself blushing around Thomas during their chat.  She noticed that the guys are “definitely more nervous than I am…but I’ve been through this before” so she said it was understandable.  On the bright side, Katie also said they made her feel special.   She said she was starting to like some of the shy guys.  “Opposites attract,” said Katie.

During her talk with Greg, he gave Katie a gift that his niece made.  It was a handmade necklace.   After playing hockey with some of the guys, Katie ended up getting into the back of the truck full of balls with Tre.  She liked that Tre was “easy to talk to ” and she’s looking for a life-long partner.

Then, Justin  presented his rose painting to Katie.  The painting had an empty space in the middle which symbolized that hopefully by the end, Katie will complete that space for him.  Then Katie gave Justin her first kiss of the night.  Then the First Impression Rose arrived and that immediately gave the guys a jolt to up their game.

Jeff showed Katie the inside of his RV which was clean, and homey indeed.  In her post interview, she said the RV “was definitely lived in.”  And he’s throwing his dirty boxers. She said she wasn’t “feeling the vibe with his RV.”

Then there was some drama between Aaron and Cody.  Aaron tells Cody that he doesn’t like him and he’s never liked him.  Hmm..this seems as though they knew each other before the show.  Meanwhile, the guy was still in the gift box!  Lol.  Katie was presented with this gift again and this time she got to open it.  The guy in the box is named James.  Katie’s reaction was that “he’s super hot” and “something intrigues me…I think we were talking without talking.” Katie said she already has a crush on him!

The guys were thoroughly threatened by “box guy’s” good looks, and well-spokenness.  One guy said he should get back into the box!  Then Connor B. got a kissing session from Katie in front of the fireplace while he was still wearing his cat costume.  Katie told Connor that she couldn’t stop thinking about him.

Michael asked Katie right away if she wants kids.  Katie said she’s leaving herself open to whatever comes her way. Might have been a premature conversation.  Then, Katie was ready to give out her First Impression Rose.  She gave it to Greg.  She told him that she feels “there’s something there.”  Greg said he does believe there’s a connection between him, and he accepted her rose.  Then they kissed.

Then Kaitlyn and Tayshia entered the room to announce that it was time to go into the Rose Ceremony.

Kaite told them that if she doesn’t call their name, it just means they aren’t the right one for her and that this rose carries a lot of weight which is the desire to have an engagement at the end of it all.

Katie said she doesn’t have a top two now, she has a “top 22” and there’s so many guys with potential.

SEASON SNEAK PEEK – The guys that appear to be sticking around for emotional journeys, and mad chemistry with Katie include: Connor B, Justin, Andrew. Then Blake from the previous ‘Bachelorette ‘season pops up playing a radio outside Katie’s room.  The other men are ready to throw-down over Blake’s emergence.  Former ‘Bachelor’ Nick Vial also makes an appearance,  it seems to give some advice to Katie.  Katie’s time with someone is “cut too short.”The preview alludes to maybe Andrew will attempt to say goodbye.   Then, Katie is seen being really peeved-off and stating that she is “done, done…somebody book my flight home.”