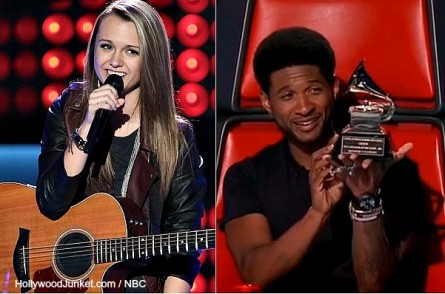 The season premiere of The Voice last season (five) started off with Blake bringing all of his ‘Voice trophies that he had won so far to use as a weapon to lure new talent onto his team. This season, it was Usher that brought a physical prize to woo-over artists onto his team during the crucial first round of “The Voice” called ‘The Blind Auditions’. A Grammy! The other coaches- Adam Levine, Shakria, and Blake Shelton looked-on with sheer “why didn’t I think of that” type of reactions as they also boosted that they also had at least one of those at home.

A Real Chair-Turner:
Christina Grimmie – Team Adam
Christina is 19 years old. She put her first video up on YouTube at age fifteen. She said she currently has two million subscribers on YouTube.

Button-pushers: Christina got all four coaches to turn their chairs for her.
Adam was the first to comment, “I see how engaging and passionate you are. You are more comfortable than I am up there! When you realize that this person can be a big star. No one fights better than me.”

Shakira chimed-in about Adam, “He’s tired. In season four, I might have been hormonal. But I’m focused. Usher’s argument was that she needs “someone who will understand who you are as an artist.” Shakira remarked, “who better to understand you than a woman?” Usher fought back, “I plan on winning this entire thing with you.” Blake had that last word, “This isn’t about me, or about them. This is about you and figuring out what you need to win.”

Usher was impressed, “You took that one where none of us imagined where it could have gone.” Usher also said T.J. displayed creativity that “defines an artist.”

Blake said, “The way you were able to maneuver through that stuff with no strain… I have a ton of respect for you.” Shakira said she did not turn her chair for T.J. because she was trying to save her ‘”bullets.”

Gunning For Blake:
Kristen Merlin – Team Shakira
singing “Something More”
Kristen is a 29 years old country singer. She said she came out of the closet at age 16. She wants Blake Shelton to turn for her.

Button-pushers: Adam, Shakira
Adam stood-up at the end of her performance, and yelled “Welcome to Team Adam”. Adam also said, “It was so cool to hear your instincts.”   He said he could tell that she sings for a living.

Shakira said, “Social media is going to be critical in getting votes.  She says she has 20 million Twitter followers. Blake said, “you have a very fast bravado. When Shakira hit her button, thought that’s who she should be with.” Shakira offered to call Miranda if Kristen picked her.

Learning to Live:
Tanner – No Team
Tanner is 16 years old. Although no coaches hit their buttons, they all gave him some good constructive criticism that he said he’ll use for his next audition.

Button-pushers: None
Adam told Tanner that he had a lot of courage coming out onto the stage at his age. He also told him, “think about when someone’s done listening to it we should all be in tears.” It’s not just singing the song, it’s living the song. Usher said to nourish his talent and hopes he comes back. Blake advised Tanner to strengthen his voice and his individuality (squeakiness) in his voice.

This is Classic:
Biff Gore – Team Usher
At 45 years old, he’s a father of five with a baby on the way.
Singing “A Change is Going to Come” by Sam Cooke.

Button-pushers: Adam, Blake, Usher, Shakira
Shakira asked if she can be his date at the Grammys when they “win this thing.” Usher told Biff, “individuality is what allows you to stand out from the rest.”

Adam said, “this is classic, this works. We all turn around because we all want to be a part of it.” Biff said he wants to be with someone who will take him all the way to the top.

Shakira assured Biff, “I’m not so busy thinking about arrangements (referring to Adam’s wedding) and Usher is thinking about a movie.” Adam said Shakria has a baby. Shakira said motherhood has made here sharper.

Biff chose Usher. Blake said he is very irritated that Biff is not on Team Blake

Coaches Favorite Performance:
Dawn and Hawkes – Team Adam
They met each other in a bar and discovered that they both sing.
Singing “I’ve Just Seen a Face”

Button-pushers: Shakira, Adam
Adam said “not only is that one of my favorite tunes ever, but that was my favorite performance that I have ever seen on ‘The Voice.'” He said his roots are in that song. Usher observed that he’s never heard Adam be so passionate

Shakira said, “I”m speechless. This has been the most special performance on ‘The Voice. It just embraces everyone around you. It shows that you are in love. You are going straight to the top.” She said she is also a producer and works on the staging of her talent included wardrobe.

Blake stated, “What it takes – a coach and the partnership. It also helps if someone has a lot of followers!”

Flirting With Buttons:
Leo Gallo – No Team
Singing “Blurred Lines”
Leo is part of Diablo Dance Theater (company) which he joined after his stint in a boy band did not pan-out.

Button-pushers: None
Adam said, “there was a lot of movement and it sounded winded. Usher and I flirted with pushing our buttons.”
Leo did some dance moves on-stage for the judges. Adam told him he is a ridiculous dancer, but advised him to hold-back on the dancing next time that he auditions.

Plaid Wearers!
Jeremy Briggs – Team Shakira
Jeremy is 26 years old from Sacramento. He said he was focused on baseball in school and became a coach after he graduated. He said it wasn’t working for him financially. He’s now working with the Unemployed State of Appeals. He plays nightly gigs and has never had any vocal training.
Singing “Bad Company”

Button-pushers: Blake, Shakira
Blake said, “Hello my fellow plaid-wearing friend!” He said he loved the way he was singing through the first verse. Blake told Jeremy not to look at Shakria, because it will be over.

Shakira said “Minus the plaid-shirt factor. Consider – who’s the hungriest here? He’s (Blake) been here for six seasons,” and said she’d put all of her energy into him succeeding.

The Jake Shuffle:
Jake Worthington – Team Blake
Auditioned during season five of “The Voce.” Jake said, he will get a chair turned this season, calls it “Round 2!” Singing “Don’t Close Your Eyes”, by Keith Whitley.

Button-pushers: Adam, Blake, Shakria
Blake said “You came back…I love that!” Adam said, “Blake has won many times, but he only won one time with a country singer…there seems to be a juxtaposition between genre and coach.”

Blake said about Shakira, “She’s a crappy coach, but she is a perfect woman.” Shakira told Jake, “I adored every minute of your performance.” Adam made it clear he was out for Blake, “Jake, It would be such a delight to win the voice with you and crush the giant.”

Adam told Blake, “I’m going to take Jake from you! Jake is mine!” Jake told Blake that he wans to be real rootsey singer when Blake asked him.

She’s No Christina Aguilera!
Karina Mia – No Team
Said when she sang a solo at the age of 11, she learned her level of singing. Karina went on the road with some friends after college. Karina said she’s no Christina Aguilera, and considers herself an Indy Artist. She also said her voice is different and hopes that coaches hear that.
Singing “Beneath Your Beautiful”.

Button-pushers: None
Usher told her, “You have a unique voice . I wanted you to give me a little bit more.” Shakira said she was “Waiting for a moment that would give me goosebumps. That moment never came.”

It Was The Shoes!
Bria Kelly – Team Usher
Bria is 17 years old and started playing music at 11 years old. She got connections to open for Miranda Lambert she said. Bria talked about the difficulty of balancing school and singing is managed very well by her Dad who retired from his job 3 years ago. She called him ‘the Swiss Army Knife for band managers”. Bria hopes for Adam to turn around.

Singing “Stamerolling Blues”
Button-pushers: Blake, Adam turned around at her first note. Shakira, then Usher followed.
All of the coaches gave her a standing ovation at the end of her audition. Usher announced, “Ladies and gentlemen we have just hear ‘The Voice’.

Shakria told her she reminded her of herself when she was that age. About Blake, Shakira said, “How many times can the Yankees win the World Series? Forget about that! I would like to help you with the knowledge over the years.”

Blake went sweet on her and told her he’s a fan and will buy her records. Usher said he doesn’t have a ‘Voice trophy but has a Grammy Award and pulled it out to show it off. He let her touch it. Adam said if you’re really good, you can turn your Grammys into shoes like Usher did! 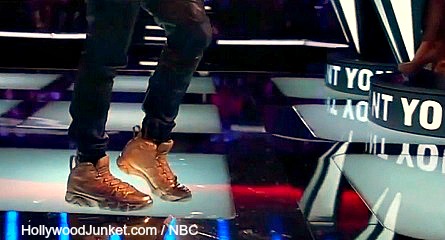 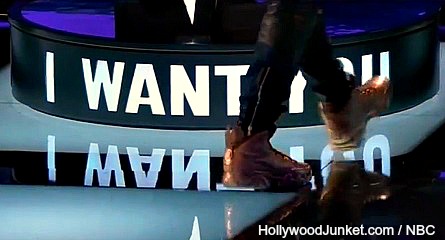 Watch THE VOICE season 6 episode 1 “The Blind Auditions Premiere” first aired by NBC on Monday, February 24, 2014. This full episode is now available at HOLLYWOOD JUNKET until 09/21/14 courtesy of NBC. ENJOY!