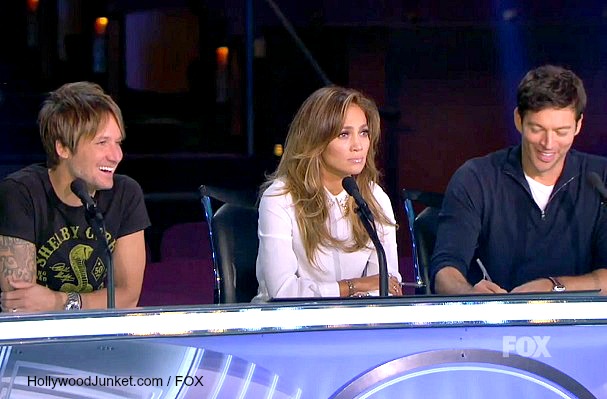 The Hollywood Week on “American Idol” had contestants that were given their ‘golden tickets’ to continue in the great singing challenge that IS “American Idol”. The first half of the first night of Hollywood Week had contestants singing their hearts out once again to judges Jennifer Lopez, Keith Urban, and Harry Connick Jr. in order to remain in the game inside of an airplane hanger.

One of the first contestants to be held-up to the fire was a young Jesus look-alike named Adam Roth. After he finished his Hollywood audition, Jennifer was a defender of his miniscule talent and said to the other two judges who were not so sure about his vocals, “At least he has something going on”.

Tristen Langley (15 years old) is the first ever second generation American Idol contestant. His mom, Nikki McKibbin was a contestant on season one.

Harry Didn’t Like Morgan’s Song.
Keith Told Contestants to Take it Serious.
Morgan Deplitch sang “Brave” in her audition. Before that, Harry said he wanted to hear her sing something that was age appropriate for her. He responded to her “Brave” with “that was extraordinarily weak.”

Stephanie Pertronelli, and Rich Lafleur were two of the singers that were just “phoning” it it. After much frustration, Keith stopped everyone in the middle of the auditions to tell them, “If you’re just phoning it in, we can’t take you serious.” Harry followed it with, “you all have to bring your A-game. You don’t have a second chance. It has to be great!” Neco Starr sang to te judges “making love like gorillas.. ” Jennifer was laughing through it.

What’s Behind Bus #1?
This is where “American Idol” really gets like a game show. The judges announced to the contestants that there are two buses parked outside. Bus One and Bus Two. Contestants are told which bus they are to get on and that one of the buses is going to Hollywood, and the other one is going to the Los Angeles International Airport to put them on a flight to go back home.

Bus Two is revealed as the one going to Hollywood and dropping the contestants off at Lowes Hotel (previously “The Renaissance Hotel”). The high-end, lavish hotel sits directly across from The Dolby Theater where the American Idols will be proving themselves again to the judges that they are Idol worthy. Some of the singers on Bus Two were: Connor, Erik, Neco.

Stealth Rehearsals at The Dolby Theater in Hollywood
The Lowes hotel stya is a perfect setup for the ‘Idol team. There is a bridge inside the hotel that connects the hotel to the Dolby Theater. Those Idol kids never even had to step foot out onto Hollywood Blvd.!

Some of the first few to stand before the judges on the Dolby Theater stage were: Majesty Rose (21 years old),
Samantha Clams, John Fox (20 years old), Brandy Neeley (18 years old). Out of them, only Brandy, Majesty and John were given the thumbs up to move on! Other Idols to follow and moving-on to the next round: Spence Lloyd, and Austin Wolfe (17 years old) who sang an Adele song.

Sierra Moreno- auditioned with her twin sister Selena, but her sister did not get the golden ticket. During her Hollywood audition, her voice started to crack in front of the judges and she had to restart a few times. She is not moving on.

“Superman” football star Ryan Watt came before the judges with Alex Preston (20 years old), Sydney (15 years old), and Jessie Roach. After they sang, Harry said about Ryan, “he had me, then he lost me.” Ryan went through to the next round anyway. Alex, and Jessie were eliminated.

Talented fast singing Kenzie Hall was the only young star to move-on in her group. Host Ryan Seacrest checked-in on the judges. Harry told him, “We cut a lot of good people because there were that many people that were that much better.”

Briston Maroney (15 years old) went onto the stage with Dexter Roberts (22 years old) who played a guitar. Keith Urban took Dexter’s guitar and rocked-out on it. The talent in the room were all impressed. Dexter and Briston both moved-on to the next round.

Rachel, Maurice, Casey , George, Tiquila Wilson (24 years old). Emily Piriz(17 years old), Malcolm Allen (21 years old), were all through to the next round.

QUALIFICATIONS TO BE AN AMERICAN IDOL:
Strong Family Values, Dedication, Passion to pursue Your Dreams, Suckin-Up

Munfarid Zaidi who was picked-up and cradled in Harry’s arms at his first audition sang ‘Rollin on the River”
Munfarid, Ethan Thompson (23), Austin Percha..(19) are all moving-on.

Supremely Fierce!
Caleb Johnson (22), a Jack Black look-alike took to the stage with Stephanie, Kristen O’Connor (24), Stephanie and Kristen were a ‘no’. Caleb, and Emmanuel are moving-on. Emmaulle Zidor (24) said he wants to be an American Idol because “I do this way better than I do my regular job” and that is an airport employee. Yikes! He said his goal in the ‘American Idol’ audition is to be “supremely fierce!”

Briana Oakley (17), Jesse Cline (19), are both going through. As one eliminated young man was exiting he said, “Who cares, it’s all good”

If I Were A Boy is Distracting to Judges
Keith London (21) became very distracting to the judges Jennifer and Harry while singing “If I were a boy”. Jennifor told him to pick a different song because it was too distracting and they were talking through it. At the end, Keith got sent to the next round.

The next group of singers individually played the keyboard on stage while singing. They were Malaya Watson (16), Jena Asciutto (17),and Savion Wright (21) who lost his brother just two and a half weeks prior to this audition. He dedicated his song to his brother. They all got sent through to the next round.

104 out of 160 made it. JLo said during groups they are looking for – choreography, harmony and unique performances

Malaya said “we feel like we have 5, we gonna bring it!” On the first day of the groups, the groups fight to see the vocal coaches before their competitors.

One Contestant Realizes That He Can’t Sing!
Jessica partnered with two boys named Matthew and Clark. Her frustration grew as Matthew continued to sing in tune with her. Clark quit the competition because he said he couldn’t sing. Matthew and Jessica parted ways and their search was on to find new groups.

JLo reminded the contestants that the judges will cut half “at least” in the group round. 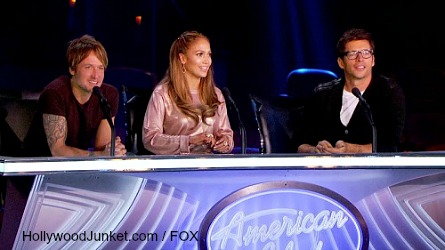 Tiquila Drops ‘Idol for Gospel, Then Harry Drops-Out!
Tiquila Wilson pulled out of the competition to pursue Gospel is what she told the judges. Harry then announced that he was dropping out of the judges pool because he doesn’t like the other judges. Of course he was joking and imitating Tiquila. 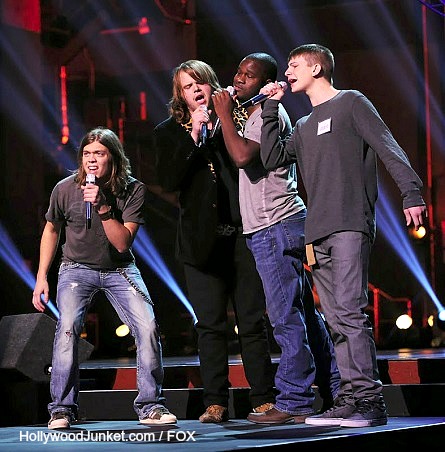 Tyler literally sang that he didn’t know the words. Matthew Hamel (16) in his group knew the words and sang back-up. C.J. Harris was also in the group that also included Caleb. Harry said, Caleb was “Next to closing” which means he was very good. Caleb and C.J. were sent through to the next round. Matthew and Tyler were sent home.

Stephanie’s Mother is on a Rampage
Stephanie was the only one in her group that did NOT make it through. Her mother was not happy and after yelling at the judges, she cursed-out her daughter’s group. She called-out Jessica on her not learning the lyrics and sleeping too much when the girls were trying to rehearse the night before.

The group consisting of Terrica, Carmen Delgina, Emmanuel Zidor picked bad song choice “Say My Name”. Harry called them on it, stating, “I would have hoped that you would have picked a song that you could sing!” He then said, “One of the most difficult parts about judging is finding individuality. There is only one person on stage that has potential – Emmanuel. Emmanuel moved on. He next has to prove to the judges that he has the whole package.

The last group of the day consisted of girls: Christina Collins (17), Olivia Diamond (22), Queen Bulls (18), Malay Watson (16). They sang “ABC” by The Jackson Five. The did a great job. Jennifer commented “here was some good stuff in there”… got to save it, make it look right.” She then said after deliberation, “some good, some bad” she told them that all four were through to the next round.

Next week – 77 remaining contestants will sing one final time for America’s votes.