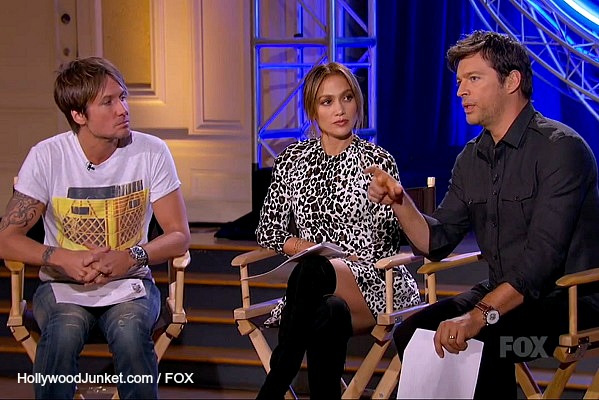 After accomplishing standing-out from the crowd and surviving the grueling group auditions, the remaining contestants had to push through yet another round of this ever-changing singing reality competition game show called “American Idol” judged by Jennifer Lopez, Keith Urban, and Harry Connick Jr., the solo round leading to the final judgements of who stays to be part of the Top 30 (15 girls, and 15 boys).

The contestants had the option of performing their solo numbers either from a song off of a list with a band accompanied, or host Ryan Seacrest joked, Keith Urban accompanied, who apparently has a habit of singing along during some of the performances. Their other option is to perform their solo from an original piece of their own, on their own without a band. Sometimes while singing their original songs, contestants exposed their weaknesses.

The First Two Of  The Top 30:
The first two of the Top 15 Guys and the Top 15 Boys were Emily and Spencer. Jennifer started-out with Emily by telling her “these guys (Harry and Keith) don’t always agree…” But, they agreed to put Emily in the Top 30. Jennifer said, finally she has a Latina in the finals for this season.

In Spencer Lloyd’s case, Jennifer told him that in regards to his solo song, it “wasn’t what showcased” him in the best way. She said, “It became a really, really tough decision as much as we love you. (Pause) We made the decision. We still want you to be in the Top 15 (Guys).”

Jillian Jensen from “The X Factor USA” is in the Top 15 girls. She said this round was the hardest part.

Madelyn Patterson was one contestant who got a “no”. She said “It’s really cool to feel so accomplished” she said about coming this far out of thousands of people that tried-out for the show. Keith didn’t waste any time and got straight to the point. He broke the bad news that she would not be moving on in the competition.
Others who heard “no” were: Michael Simeon, LeBryant Crew, and Sabrina Lentini.

George Lovett sang his heart out during his solo performance, and it paid off when the judges told him he is now part of the Top 15 boys.

Sam Woolf chose to play an original song that he said he wrote. He played the guitar as he sang. Jennifer said at the end of the day, they believe he could be the next American Idol. Sam was added to the Top 30.

Another talented singer, Keri Lynn Roach, was let go. Before hearing her final fate, Keri said she thought she deserved a spot and that she got it. Keith said “We’ve been listening to so many great singers. WE have only 15 spots. Jennifer said “it was so close.” Keith told Keri “today baby it’s a no.”

Malaya Watson, a tuba player, had a mishap during her solo performance. Malaya was stopped by the judges for singing off-key with the band. She was able to make a successful rebound. When she walked into the judges room to learn her fate, Harry pronounced her name wrong and she quickly corrected him. Harry said, “I’m glad that you corrected me on the pronunciation of your name because that name is gong to be famous one day.” Then he told her she is in the Top 15.

Maurice Townsend was also accepted into the Top 30. Harry said about Maurice, “he’s a badass”.

Former “American Idol” judge Randy Jackson showed-up to visit the judges. Harry Connick did a song and dance for him on the American Idol stage.

Bria Anai Johnson performed “This is a Man’s World” and blew the judges away. So, it wasn’t surprising that she made it to the Top 15 girls.

Jessica Vs. Jesse:
Jessica Meuse sang an original song called “Done”. She went into the judges room with Jesse Roach (27 years old) where they could both hear their fate. “We’ve run into a problem with the two of you” said Jennifer. Harry said “it was so close, that we are going to need to hear you guys sing right now.” They had to re-audition their solo songs in front of the judges! Jessica was the first to step-up and started singing to try and claim her spot.

Jesse was “defeated” and lost out to Jessica who will be joining the rest of the ladies in the Top 15.

The Real Deal:
Dexter Roberts works on a farm and entered the American Idol contest to test his talent. Keith said, “we are looking for people who are the real deal.” Dexter is also part of the Top 30.

Ready For Take-Off:
Emmanuel Zidor may want to be the next American Idol more than any of the other contestants. He walked into the judges room to hear his fate already tearing-up and crying. Jennifer said she’d bring him a parachute because he’s in the Top 15 boys.

The Secret Weapon:
Emkay Nobilette is possibly the secret weapon of “American Idol” this season. She is brilliantly talented and an openly gay singer. After a judge said to her, “You’re not the typical American Idol”, Emkay stated to the judges “I’m obviously gay. There’s always going to be people that hate me…but the world is changing.” Jennifer responded, “We think that you could be an American Idol and we want you to be in our Top 15”.

Kristen O’Connor who impressed the judges from her first audition was told she’d be part of the Top 30.

Jordan Brisbane, who is 15-years-old said he wanted to shut American Idol down because that is how good he is! The judges laughed. Keith told him today is another “yes” – on his 16th birthday.

Casey McQuillen was a “no”. Harry said he was proud of her perfecting her craft. Nica Nashae was another “no”. Jennifer said I feel like people are going to remember who you are. I want you to know that I was pulling for you and said she was one of the best singers and cried as Nica walked out of the room.

Leah Vs. Andrina:
Leah Guerrero and Andrina Brogden were brought into the judging room together. The judges told them that it was Andrina that was going through to the Top 30 and Leah would not be. Harry told Leah “don’t quite the fight” and to continue with her singing.

Malcolm Allen who wore a bright yellow sweater as he sat in front of the judges, was told by Harry that on behalf of the judges he made it to the Top 15 guys.

Alex Preston said he didn’t think he would make it this far because his style is so different. Keith broke the happy news that Alex will be part of the Top 30. Harry and Jennifer said “He can’t believe it” at Alex’s response which was obviously surprise and shock.

Casey Vs. C.J.:
This episode ended on another contestant pair competitors in the room with the judges who would learn their fate.

Casey Thrasher and C.J Harris went in to the judging room together. It’s a really interesting situation. They are both form Alabama, live about forty minutes from each other and both are dads. The judges told them that they have so much in common, and had a difficult choice. They had Casey and C.J. “fight” for a spot by doing a sing-off in front of them. Harry closed this episode by telling Casey, “we have concluded through a lot of deliberation with the people that have made it so far…” To be continued Thursday night.