Katie said her ending is how it was supposed to happen and believes that everything happens for a reason.

A fan favorite exited “The Bachelorette” tonight.  Single father and widower Michael Allio said goodbye to ‘Bachelorette Katie Thurston after hearing a disturbing comment from his son James over the phone who said  “Daddy don’t want to see me.”  It was heart-wrenching for any parent to hear.  On that note, Michael ultimately put his son first and went home to his son.

In “The Bachelorette: The Men Tell All” episode tonight, Michael A. went on record saying that if Katie should want to try for a romantic relationship with him again, he’d be open to it.  When hosts Kaitlyn Bristowe and Tayshia Adams told Katie about what Michael had said, Katie quickly reacted, “everything happens for a reason” and her ending was how it was supposed to be.

A number of the men took turns in “the Hot Seat” on stage being questioned by Tayshia and Kaitlyn about their journey on the show with Katie.   Connor B. made his best effort to clear his name of being a terrible kisser in a visual demonstration!  Villains Hunter, Aaron and Thomas had their chance to try to clear their names by explaining why they did and said the things they did on the show.

Connor B. (a.k.a. “The cat suit guy) was next to be in the Hot Seat.  His story showed how Katie eliminated Connor on their one-on-one date after kissing him and saying she didn’t feel anything.  Connor was crushed and said “how bad of a kiss can I be?”in his confessional video.

While in the “Hot Seat,” he told everyone that after he got back home, he called a couple of “people” whom he had kissed and asked if he was a bad kisser.  He said one person explained that, that’s not it.  There’s just no connection. 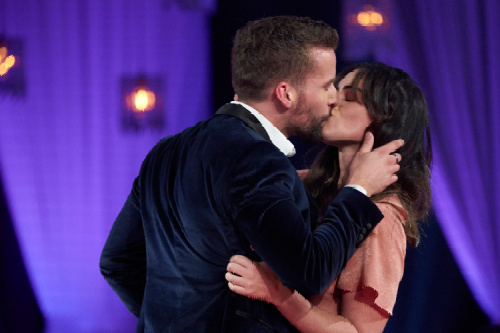 On that note, a girl in the audience stood up and told Connor that he’s adorable.  “I know that you can’t be a bad kisser. ”  She rated the kiss at an eleven! The girl said she noticed that Conner was checking her out earlier.  Connor admitted that he was.  Before going to break after that.  Connor said “One more for the road” and kissed her again!  Then asked if she would accept a rose, which she did.  Connor could be heard asking her for her phone number. 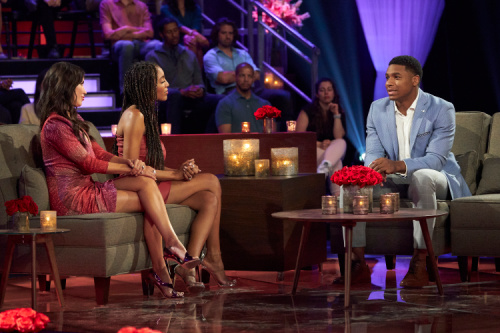 Andrew S. was next.  The first night Andrew faked an accent which showed his playful side right away.  Katie said “he just makes me so happy.”  She said she loved that they can “get deep..and laugh so hard they’re crying.”  Katie was a woman that could understand what Andrew had been through growing-up poor.  He was “definitely falling in love with Katie.

It was tough for Andrew to relive his journey through the video package.  He said “what made it so hard…it was such a real thing for us both.”  Andrew stated that he’s been accustomed to heartbreaks.  “Having to restart again is something you never want to do.” He said he’s still waiting for someone to pick him for him 100%.  Andrew said the hardest part was that there was never a “bad moment.”  Tayshia brought up his conversation with Katie about interracial dating.  Andrew responded that “she killed it.”  He said being a black man, he’s not afraid to shy away from that.  “That’s exactly who I am.”

Michael’s story started when “time stood still” the moment he saw Katie.  During his journey, Michael opened-up about losing his wife to cancer, and being a dad.  Kaite said the life that she pictured with Michael and his son James “is such a dream” Katie described.  The moment that Michael got a call from James stating that “Daddy don’t want to see me,”  it killed him.  Michael told Katie that he was going home.  Katie responded that she saw them “going to the end which makes this really confusing right now.”  Katie said his decision is the best for his family, “but, in this moment I’m sad and I’m mad…it’s possible that my person just left.”  Katie was very sure that it was going to be her and Michael at the very end.

Watching it back, Michael teared-up.  He said since that day, “I’ve been feeling it the entire time.  It’s a reminder of what I had to do to be a wonderful dad to a great son.”  Michael said “it’s a constant juggling act.  The fact that we were so close makes it harder.”  He said for a single parent, it was his only decision.  Having to say goodbye to someone he was falling for, Michael said, was very difficult.  Him and Katie had a connection that was there from the beginning.  “It feels as though we left so much unsaid.”  Michael said he knows how beautiful love can be and how strong that bond can be.

Michael said he was with Laura, his wife for 16 years, “it doesn’t seem possible” to fall in love again.  But, he believes it will happen again.  He also stated that if Katie still wanted to be with him after everything, it will happen.

To lighten things up, Kaitlyn brought out her fiance, former ‘Bachelorette contestant, Jason.  They aired the footage of when Jason proposed to Kaitlyn on their podcast.  Jason said he always knew that he wanted to propose to Kaitlyn, but it’s hard to surprise her. 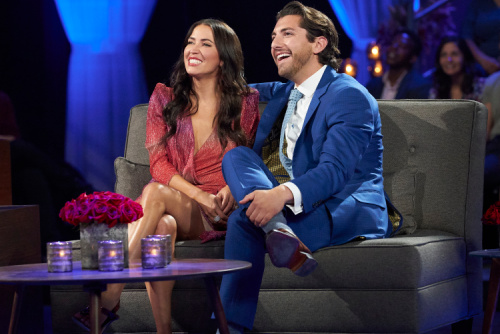 THE MEN GET CLOSURE WITH KATIE:

Katie came out onto the stage.  She instantly told Michael that he looks “so good” and she liked his new beard.  Michael explained to Katie that he never wanted to leave.  She understood that he had to leave for his son.  He said going through that experience made him realize that he can find love again.  Kaitlyn told Katie that Michael said if she gave him a second chance, he’d be open to it.  Katie said her ending is how it was supposed to happen and believes that everything happens for a reason.

Andrew second everything that Michael said.  “I’m thankful that you were able to create a man out of me in ways that I didn’t know was possible…everything we had was super-real.”  He said she’s going to be an incredible wife and mother someday.  Katie said it was through watching their journey back.  She has nothing but love and respect for him.

Tre said he was very nervous about meeting Katie.  Tre said he talked A LOT about Thomas, but he had moments that were real with Katie and he was able to make him believe in himself a little bit more out of all of it.    Aaron said he always had her best interests at heart through all the drama.  Then, Connor B. stood up and played his banjo that he brought.  HE said her an original song…”I know I didn’t win your heart.  But, I walked out with 30 new friends.”

Tayshia asked Katie about Karl, who waved a red flag about there being “multiple” men there for the wrong reasons.  She said ultimately Karl was right. But, in the end, their relationship wasn’t strong enough to continue.  She said the men as a whole were more important than him and sent him home earlier than anticipated.   Kaitlyn announced that Thomas wasn’t able to make it there in person, but joined them via video chat.  He said everything that happened in New Mexico, “still sits with me.”  He said a lot of his actions took away from her and the other men in the room.  He apologized to Katie.   He asked her why things shifted so quickly.  She said while she was talking about what was going through, he was focused on himself.  She said that it didn’t feel genuine.  So, that’s why she sent him home that night.  Katie told Thomas that if the way that she sent him home caused him any pain, she did apologize for that.  Thomas said thanks “I guess.”

Katie was asked if she had any regrets.  Katie answered that ultimately she doesn’t.  August 9th will be a three-hour season finale.

SNEAK-PEEK: It’s time for the Hometown Dates!  There’s a lot of talk about saying the “L” word.  Justin said he’s not ready.  Blake’s sister said “what if someone’s already said it and she’s said it back.” Katie said she’s losing her mind and “I am done, I am done.  Then, Kaitlyn is seen knocking on Katie’s door to talk.  Katie said she feels like she’s gone through that for nothing and wanted someone to book her flight home.