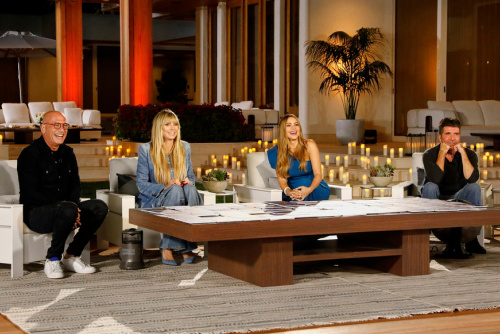 It was the remaining auditions that aired in Tuesday’s episode of “America’s Got Talent” (AGT) season 16 week eight.  Host Terry Crews reminded viewers that the winner this season will get a show at the Luxor, Las Vegas and one million dollars.

This episode was the last day of auditions.  Next week is the Olympics.  “America’s Got Talent” Live Shows are back in the Dolby Theater in Hollywood, California starting August 10th.   At the top of the show, host Terry Crews asked for Simon’s advice for the AGT contestants.   Simon answered that, “It’s like the Olympics, you train and you  train.   Literally two minutes can change your life forever. Confidence and talent.  But, it’s those two minutes.”   The first act of the night was an adorable animal act.  But, not the type that we typically see on AGT!

The theme of this episode were on contestants who came from different countries to audition for AGT.

Shy came with his bunny named “Bini” from Israel.  They currently live in Los Angeles.  Shy said Bini is “very much a diva” and learns new tricks every day.  “The basketball game is a game he developed himself…we are here to win,” said Shy.  He told the judges that rabbits “deserve more respect.”  He put five years into training for this act.

Bini didn’t do any of the tricks except for dunking the basketball.  Simon was the only judge that gave this act an “X.”  When the audition was over, Simon reacted, “people prefer dogs to rabbits “because dogs do things.  Rabbits don’t do anything.”  Howie voted yes.  Simon was a “no” vote.  Heidi voted “yes.”  Sofia was the deciding vote.  The audience screamed “put him through.”  Sofia voted “yes.”

Savannah said people tell her that she reminds them of “a little Beyonce.”  But she wants to be herself.  She sang “Driver’s License.”  Howie told her he thinks she’s going to be a star. Simon told her she has a great voice and great taste as well.  She got four “yes” votes.  After Savanna left the stage, Simon said he doesn’t know how good she is.

Zach is from the U.K.  He sang a Pop song and sounded great!   Sofia thought he was adorable and heard the girls go crazy over him.  He also got four “yes” votes. 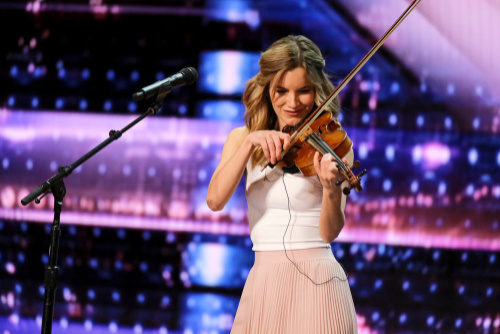 Gabriella is a French/Canadian from Monteral and doing music full time is her dream.  She thought, “the American dream can come true” and she’s been dreaming about being on AGT for years, she told Sofia.  Gabriella started out playing the violin, then sang.

The audience loved her.  Sofia said the violin was the perfect addition to her beautiful voice.  Howie said he wasn’t expecting her sound and it was angelic.  Heidi thought it was beautiful.  Simon said “it was definitely better on the second half of the song” and “everything got better” in the second half.  After some hesitation, Simon gave her a “yes” vote, followed by “yes’s” from the other judges.

Medhat is from Egypt.  He said he’s going to play “the recorder.”  Simon asked Medhat what other “recorder” artist  does he look up to?  He couldn’t answer the question.  Which was Simon’s point.   After he did a great job of playing a wooden flute while throwing in some B-boxing, the judges had some positive reactions.

Sofia said she’s obsessed with Middle Eastern music and loved it.  Heidi said “I hope something else is going to happen.” Then it did and she thought it was “so cool.”   Simon said he “hates the recorder” because he used to have to play them in school.  “Where do you think you can take this to?”  Medhat answered that he’d like to have his own show in La Vegas.  Howie said he doesn’ hate the recorder, but was forced to play it in school.  It  was surprising that he took it and “made it trendy,” said Howie.  Simon and Howie liked the surprise of his audition.  Sofia said “in Columbia they don’t FORCE us do anything .  So I’m not traumatized” from the recorder.  She and the other judges voted “yes.”

Sergio is 24 years old from Chile, His family is from Columbia.  He told the judges that he’s a juggler, but different.  A “bounce juggler.”   Sergio juggled about six balls while doing a backflip and going down stairs.   He never missed a beat.

Sofia called him a “showman” and proud that he has Columbian blood in him.  Simon said “it was way better” than similar acts they’ve seen.  Heidi was impressed so much that she said “it didn’t look real half of the time.”  Sergio got four “yes” votes.

The judges were not impressed by some of the really talented dancers that followed. A couple – Erik and Shelly, were one such act.  Heidi explained that there were no flips, and Howie said there was “no wow factor.” 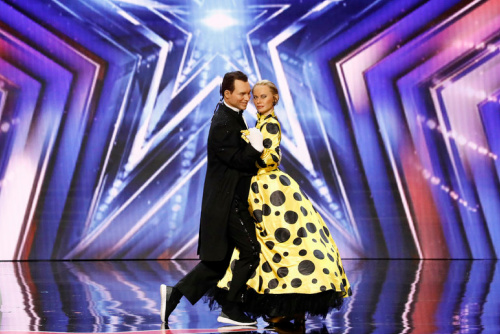 Pasha is from Moscow, Russia.  Pasha said he usually dances with his wife.  But, she missed her flight.  Simon asked why they didn’t get on the same flight?  He told him because his wife was visiting her mom.

Pasha left the stage briefly.  Howie was perplexed, “how is he going to compete without his wife?”  Then Terry Crews came out on the stage wheeling-out what looked like two dance mannequins.  One female, and one male that looked just like Pasha.  The mannequins danced and were obviously being controlled from underneath.

The judges were a bit freaked out and fascinated at the same time at the sight of this strange act.  At the end, Pasha revealed that he was underneath both mannequins..  The judges were really impressed.  And, it seemed that the story of his wife missing he flight was made-up.

Sofia said it was surprising and she’s never seen anything like this.  Heidi said “it was very entertaining.”  Simon responded “you got us.”  He added that they thought it was going to be “terrible.  But, it was great.  It was a great surprise.”  Simon said they “love to be surprised.”  The judges gave him all four “yes” votes. 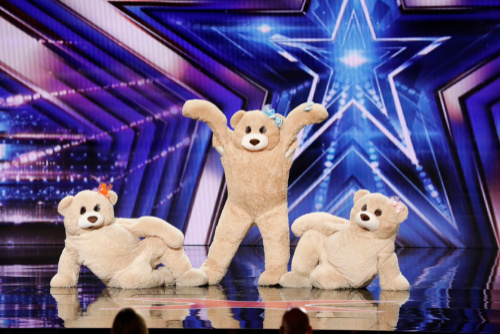 MORE ACTS that followed were three costumed dancing female bears, “Charming Bears.”  Simon said “I think people will love you.  So, it’s a yes from me.”  A John McEnroe impersonator, “Jonas Mcenfro” who spun around inside a hula hoop..  A young contortionist, Anna McNulty,  was next who also received “yes” votes.  Heidi said “all of the fun acts are absolutely my favorites.”  There was a cup stacking act called “the Science Wizard” that got Heidi and Sofia involved in the cup stacking. 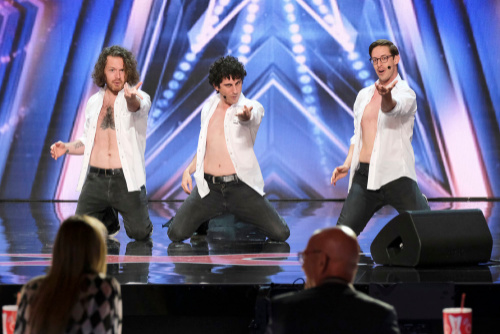 LEWBERGER was a group of three men who performed singing a song that was dedicated to Terry Crews.  They invited Crews to take his shirt off, which he did.

Dylan is from Pennsylvania.  He’s 14-years-old and said she’s been a singer and musician his whole life.  He  performed Queen’s song “Somebody to Love” on the piano.

Sofia said she loved it and he has “a powerful voice.”  Howie said he got connected to the joy and the happiest place he can be is there on that stage.  Sofia asked Dylan if he writes his own songs, he said “yes.”   Simon said “It was just a great audition and said Dylan is someone to watch and thinks there’s a lot more to come from him.  Dylan received four “yes’ votes.

These brothers, from Columbia, said Soia is the pride of Columbia.  “We want to perform in America, and this is our chance…this is our dream.”

They came out onto the stage dressed in muscle shirts.  The brothers stacked themselves on top of each other.  And the finale of their act was when one man did a headstand on top of another man’s foot.   Sofia loved it.   She told them it was “amazing.” Howie agreed that the act was amazing.  Heidi told the guy who was in the middle, very incredible.  Simon said because they’re brothers, it’s special and this is what AGT is all about.  The brothers got all “yes” votes from the judges.

Mike is 45 years old and is a comedian.  He said he started doing it to “alleviate tension in the house” when he was a child.  He wanted to  make his mom laugh.  As a kid, he knew he loved comedy.  He went into the Army, then worked various jobs to pay the bills.  Finally, his wife suggested he do comedy full time.   Mike  said he’s a father and will be married 21 years in August.

Howie reacted that he’s very good and very relatable.  Heidi loved it and said she was laughing the whole time.  Sofia said it was “very light and fun” how it should be.  Simon told Mike that it started out a little slow.  But, it was a good audition and people are going to be rooting for him.  Mike got four “yes” votes.

Anica performed the Janis Joplin song “Another Piece of My Heart.”  Howie said he loved her performance and she’s “fun to watch.”   Sofia loved her energy and her performing that song.  “But, it wasn’t spectacular,” Sofia said.  Simon agreed with Sofia and said after 30 seconds, he was done with her act.  Simon said “no.”  Heidi and Howie said “yes.”  Sofia had the deciding vote as the audience yelled, “put her through.” Sofia said “yes,” and Anica went through to the next round.

MARY BOWERS (Variety).   Bowers is a world ranked competitive eater.  She ate her way through a large cake that she popped out of.  The judges gave her all “no” votes.  Another contestant brought a large pizza.

Nick Diesslin became “pizza man” at a restaurant when he added some extra ingredients.  He’s a web developer by day who is “pizza man” by night.  Nick ended-up being the most amazing dough tosser ever.

The audience roared and cheered.  Howie was called up to “assist.”  But, he wasn’t used by Nick.  Howie said it was a “waste” of him!   Heidi said maybe he can build on his act by having someone throw some sauce and cheese.  Sofia said “the whole thing was fun.” Simon said he thought Nick was going to be an idiot.   But, it was one of the best auditions.  Nick got four “yes” votes from the judges.

KidJay. is from Detroit,  Michigan.  He sang rap music.  Howie told KidJay, “you have a real positive message that comes from your heart.”   KidJay got four “yes” votes.

Dflex is from Nigeria.  He traveled from Nigeria to be on AGT.  Dflex said when he watches the show, he gets goosebumps and always wanted to be there one day.  He said Howie is one of his favorite judges.  The dream is to give his family the life they deserve.  He said his wife did everything to make it possible for him to be there on the AGT stage.

After his contortion act, Dflex got a standing ovation from the audience and judges.  Heidi loved it and his facial expressions.  “It was weird and beautiful at the same time.”  Dflex got emotional and was crying.  He said he was thinking of his wife and what they’ve gone through for him to be there.  Howie said whatever sacrifices she’s made, it was worth it for this moment right now.  Sofia loved his energy and he was having fun.  Simon said “I love people like you who are passionate about what they do and who want to win.” Simon said all those things really matter and he’s the kind of contestant that they look for.  Dflex got all four “yes” votes.

That was the final audition for season 16.

SNEAK-PEEK TEASER:  The Judge Cuts round in a new way.  The judges did their deliberations from Simon’s house in Malibu.  They had to choose 36 out of 150 acts.