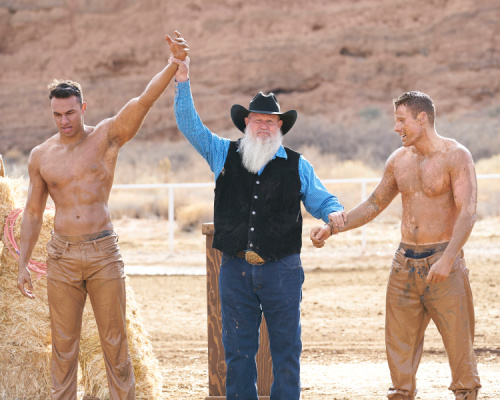 “The Bachelorette” season 25 had Katie Thurston going out on two Group Dates, and one, one-on-one date.  There are twenty-two remaining men.  Things were bumpy along the way throughout this episode.  Katie struggled to get close to Greg during a date that was reminiscent of her father’s favorite activity.  Then, things got really rocky when one of the guys got exposed as a fraud.  Then, soon after, more accusations were made of the other men.  Thus, the drama was too thick to get to the Rose Ceremony this week.

The men on the group date competed for “Greatest Lover of All Time.”  Mike, who is a virgin, won this sex positive challenge.   The rest of the guys were hopeful for the Group Date Rose. 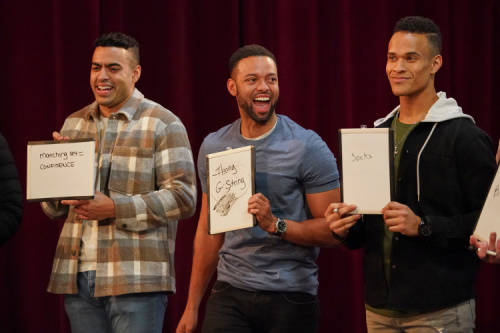 Back at the house:  Greg got the first one-on-one date after getting the First Impression Rose last week.  The other guys were jealous.

Back to group date:  Karl was feeling confident that he’d get the Group Date Rose.  Katie revealed to Karl that it’s been two years since her last serious relationship.
Thomas came in to interrupt Karl’s time with Katie. She told him, “It’s like this connection that you can’t explain” and told him that she’s been thinking about him a lot.  He told her that she’s what he’s looking for in a partner.  “you know when you feel something.  You know it’s something special when you can’t explain it,” said Thomas  to Katie.

The Group Date Rose went to – Thomas.  Karl reacted in his confessional “I am pissed.”  He was determined to “fix this” during the Cocktail Party.

Katie arrived in a pickup truck to gather Greg for their one-on-one date.  James was jealous of Greg as he watched Greg leave with Katie. Katie brought Greg to a camping spot so she and Greg could go fishing.  Katie’s Dad passed away in 2012, and she and her Dad used to go fishing together. 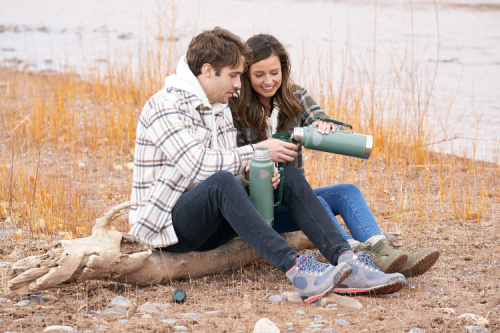 Katie told Greg that she sees potential in Greg.  They kissed while Greg sat on their make-shift bucket toilet at their camping ground.  Katie expressed that the fact that the date reminds her of her Dad is a way of Greg meeting him without meeting him.
Greg told her that he doesn’t feel burdened to hear about the personal stuff with her dad and that he does feel a connection with her.

Back at the house:  The men got the next Group Date card.  The names on the card were: John, Andrew S., Kyle, Josh, Aaron, Brendon, Hunter, Cody.  The card read: “Let’s get down and dirty.  – Love Katie.”

Back to Greg & Katie:  Katie told Greg it was a little difficult to open-up to him about her Dad.  “It was tough to be able to relive these childhood memories and be happy at it.”  Greg told her “it’s okay to be vulnerable with me…I want to be that rock for you.”  Then he told her that he actually lost his Dad too, two years ago.  His Dad had Stage Two cancer and was told he’d have one month to live. He also went camping with his Dad.  Greg could relate that it’s hard to know that his Dad won’t see the girl that he’s going to marry.  “It was hard and challenging to come here.”   He said ever since his Dad died, it was hard to give himself to someone.

Katie said what was so beautiful is that they went on a date together that reminded them of their dads.  “The fact that I could enjoy it was such a gift that you gave me today,” Katie told Greg.  Katie liked that Greg wears his emotions on his sleeve.  She said the date “was perfect” as she gave Greg the Date Rose.   Then a fireworks show went off.  The men back at the house were really worried about Greg coming back with a rose because of his connection with Katie. 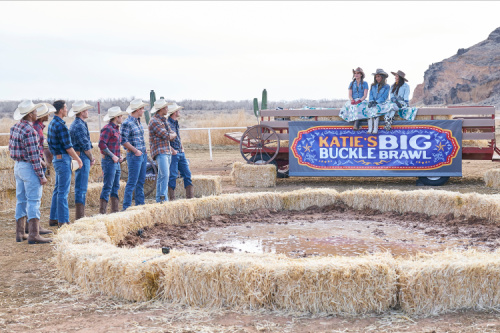 Tayshia and Kaitlyn arrived at the men’s house to wake them up early while pounding pots and pans.  Katie met at the stables.  The men were told that there would be a competition where one man would win a belt buckle called,  “Katie’s Golden Boy’  They had to compete in “Katie’s Big Buckle Brawl” where the men had to wrestle in the mud.  They were randomly paired to wrestle each other.  Andrew S. vs Kyle.  Kyle didn’t like his match because Andrew plays football and didn’t think it was a fair pairing.  Then it was John vs. Josh.  After their bout, it was Aaron vs. Cody.  The women could see the tension between the two.  Aaron and Cody knew each other prior to the show and don’t get along.  Aaron won the match.  Katie said if there was a problem in the house, she wanted to address it head on.

Katie Gold Cowboy belt went to Aaron.   Because he was the winner, that gave Katie some time to chat with him in private.  She asked him about his tiff with Cody and they all noticed it.  He told her that they know each other from San Diego and they aren’t cool with each other.  There were some social media posts that he didn’t like.  “He handles things in a way that’s just malicious. It is not the energy that I want around me…there’s always that concern there.”  Kaite appreciated Aaron telling her and said it’s her biggest fear to have someone there for not the right reason  and “If you have a hidden agenda, it’s not going to be a secret for long.”

THE AFTER PARTY – Cody had high hopes of getting the Group Date Rose.  Katie asked to talk to Cody first.  She asked Cody what Aaron was talking about.  He said that he didn’t know that, that’s not factual information that Aaron said about him.  Cody swore that he doesn’t know what Aaron is referring to and speculated that it was “exaggeration” that Aaron said about him.  After their talk, Cody said he was “so heated,” then he called Aaron to the side to talk in private.

Aaron said it’s a responsibility to bring it up to Katie because they are connected.  Katie didn’t think Cody seemed genuine and thought his reactions were “rehearsed.”  Katie pulled Cody in private again to tell him “there’s no point to drag this on further.”  She decided to send Cody home right then and there.  She said it was too early to feel that she doesn’t trust him.  So, her only option was to send him home.

The guys’ After Party was ruined because most of the evening was spent with Katie getting to the bottom of Aaron and Cody’s drama.  The guy’s were shocked when they heard that Cody went home.  It was a wake-up call.   Andrew S. was the first guy to go check-up on Katie and to tell her that he is there for the right reason.  Katie and Andrew S. could relate to each other in the fact that they both grew-up poor.  He told her that her dad is going to be proud of her for being an exceptional young woman.  Then they kissed.

“It’s crazy how much Andrew S. and I have in common, and bonded,” said Katie.  Katie got the chance to talk to the rest of the men on the Group Date.  Hunter wroe her a sweet note.  She said she sees a future with a lot of them.  Katie gave the Group Date Rose to Andrew S.   Hunter said he felt like he “got punched in the gut” after NOT receiving the rose.

Katie wore a stunning metallic green gown as she entered to greet the men at the top of the Cocktail Party.  She told all the men why she sent Cody home.  She made it clear that she “deserves to know what’s going on in the house…this is my actual life.”  She stole Conor C. away first “to make up for some lost time,” Katie said. She was looking forward to forming relationships with the men who she had made connections with.

The men were wondering if there are any other men there that are NOT there for the right reasons.  During her time with Thomas, she told him that she knew that there is something special there.  Karl told Katie that he doesn’t think everyone is being “100% transparent in the house.”   Katie got all the men together to make an announcement.  She told them that “tonight a bomb was dropped on me about multiple people still here for the wrong reasons.” She told them to “get the f*#@k out!”  Then asked if anyone wanted to say anything.  Then she called Aaron to the side to talk in private.

Aaron was confused and wanted to know what was going on.  The rest of the men were confused and didn’t know where that came from.  Karl said he spoke to Katie and told them that he doesn’t believe that 100% of the people there are there for the right reasons.  The men wanted answers.  He said he “heard some stuff floating around.”  Karl said he wanted to give the person a chance to fess-up and come forward.  Karl said he knows that some people aren’t being authentic.   When Aaron called Karl out, Karl admitted that he doesn’t know which people, he just said he’s not “100%” if everyone is there for the right reasons.

The episode ended before the ROSE CEREMONY.

Sneak-Peek Teaser:  The most jaw-dropping revelation during this trailer was when Thomas was seen stating that the thought of becoming “The Bachelor” did cross his mind!