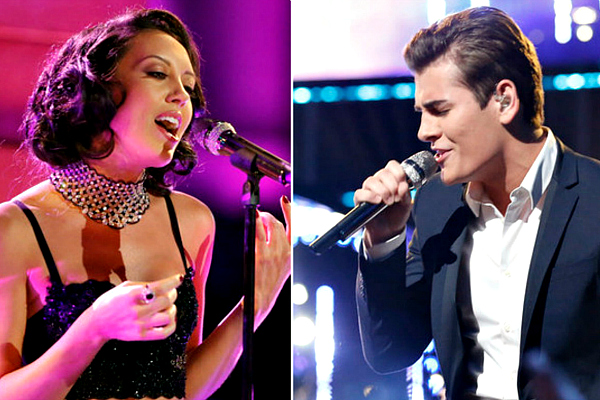 The eleven artists performed on Monday night to garner America’s votes once again to stay in the competition. The ten artists to move on to the Top 10 were revealed in the results show on Tuesday. ‘Voice Pharrell Williams performed “Freedom” during Monday’s show. This week, in honor of Thanksgiving, the artists brought family members to their rehearsals and they shared memories from the artists pasts growing-up.

Shelby Brown‘s dad who’s a police officer, joined her during rehearsal with coach Adam Levine. Shelby sang Lady Gaga song “You and I”. Adam promised to get Shelby a giraffe if she did well. Blake said he knows that Shelby LOVES Alabama (referring to the lyric in the song) and Blake said it was his favorite performance. Pharrell said Shelby “came out like a canon” and was her most comfortable performances. Gwen reacted that it seemed like one of Shelby’s songs and told her to not grawl so much. Coach Adam doesn’t know how he’s going to pull off getting her a giraffe because she killed her performance. 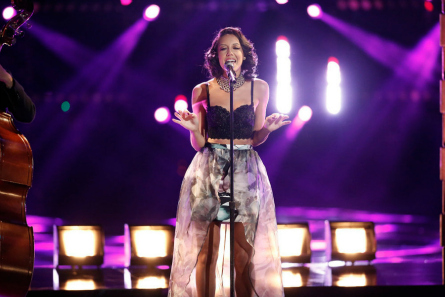 Amy Vachal brought her dad to her rehearsal. Amy put her own spin on Taylor Swift’s “Blank Space.” Blake said he wants to hear Amy do a “flip” on his “Boys Around Here” song. It was his favorite from Amy. Pharrell said it framed her voice so well. Coach Adam is proud that she’s creating an album of different songs and is “pleased.” 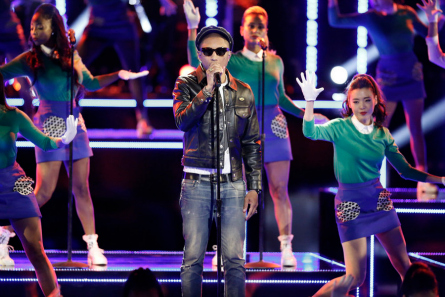 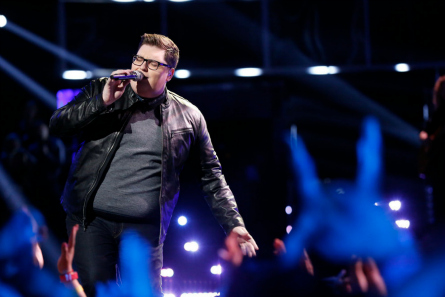 Jordan Smith brought his mom who allowed him to discover music. Adam gave his “Who You Are” by Jessie J. This song represented that it’s okay to be who you are. When he was done, the audience screamed and cheered uncontrollably. Pharrell said it’s remarkable to watch his attention to detail and “people can feel your intention.” He called it “huge and awesome.” Gwen said “it’s hard to speak after that.” She told him that it’s so fun to watch. Coach Adam said in 15 seconds that Jordan is one of the best performers he knows because he “does the impossible” to sing like he does, and does it “with conviction.”

Evan McKeel‘s mom said Evan started singing at an early age. Evan sang “Smile” by Nat King Cole while sitting on a stool playing his guitar onstage. Host Carson Daly called it a “timely song selection” and “a good time for that one.” Gwen told Evan it was her favorite, and it was “very, very good.” Blake stated that Evan is such a pro and said it was “huge” that Evan had a girl in an aquarium in the background. Pharrell told Evan he did a great job because it was a “super moment” that Evan “let people in” during this performance. 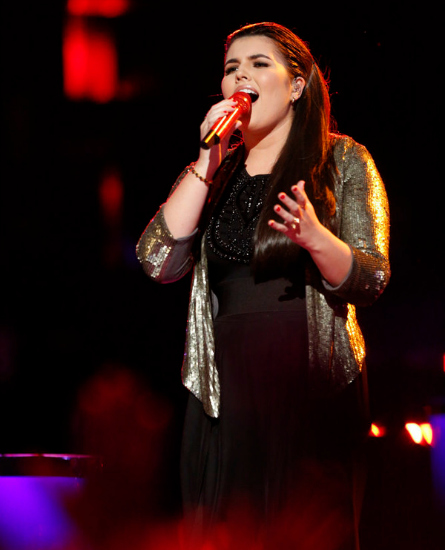 Madi Davis‘ move sat in Pharrell’s red ‘Voice chair during Madi’s rehearsal. Pharrell told Madi to “volunteer her spirit” during her performance of song “Love is Blindness” by U2. Pharrell went to Madi on stage and hugged her. Gwen was crying. Adam was shocked because he didn’t know that she had that in her. Blake pointed-out that Madi’s dad was crying in the audience and called it the best performance of the night. PHarrell incited the audience to clap and cheer for Madi again. “Your parents, family and friends must be so proud of you. That was amazing,” Pharrel told Madi. 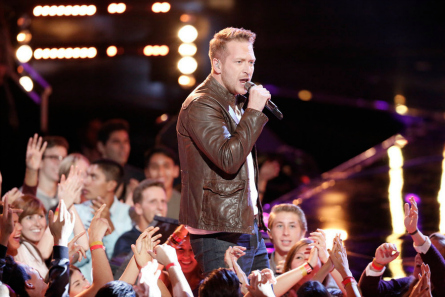 Barrett Baber had his wife with him in rehearsal with coach Blake. Barrett chose to sing “Delta Dawn” by Tanya Tucker which he made his own. Coach Blake was yelling and shouting with excitement as was also the audience after Barrett’s performance. Gwen told Barrett he is “manning the stage” and she’s getting to know him every time he gets up there. Adam said he knows when he hears Blake hollering, the knows it was good! Adam thought it was nice to see the “energetic side” of Barrett. Coach Blake called Barrett his biggest night on the show and he made a song that has nothing to do with going to church, took them all to church! 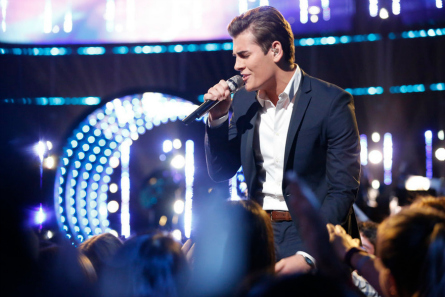 Zach Seabaugh has four sisters who all say they get asked about him a lot. Zach’s mom came to his rehearsal. He sang “Are You Gonna Kiss Me or Not” by Thompson Square. Of course, all the girls in the audience were screaming like crazy. Gwen told Blake he was cheating by having Zach do that song because he’s a heart-throb, and that should be his first single. Adam mocked girl-screamed, then said Zach has the chops, and he can sing and it “kinda pisses” him off. Blake said Zach has some Elvis in him.

Emily Ann Roberts sang “Why Not Me” by The Judds, produced by coach Blake Shelton. Emily Ann’s dad said she’s been inspired by Ricky Skaggs ever since was a toddler sitting in a car seat. Pharrell told her she’s makes it abundantly clear that she’s singing a classic song and was amazed how she sounds at 17-years-old He called her voice “classic.” Blake, once again, told Emily Ann that she will be around for a very long time.

Korin Bukowski was in the bottom two last week and won the Twitter “Instant Save” against Mark Hood from Team Pharrell. Her Dad who was with her during rehearsal said it was a high and a low last week. Gwen advised Korin to give it her all. Korin’s dad told her to “let everyone in your heart.” She sang “Only Hope” by Mandy Moore. Korin wore her hair and outfit that resembled very closely to Gwen’s style. Adam reacted that it’s hard for an artist to find an identity, and he’s proud that she’s making the music in her own way. Pharrell noticed that she wasn’t nervous and she’s being herself. Gwen told her that she’s happy for Korin and she has such a unique sound and is “powerful” with her performance. 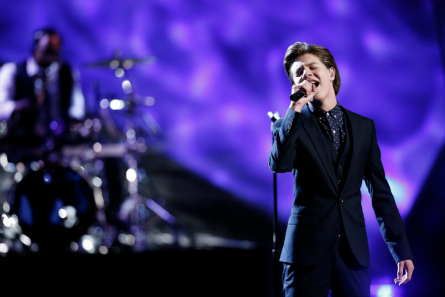 Braiden Sunshine‘s Dad was at his rehearsal and liked how Gwen connected with Braiden like a mother. Gwen gave Braiden 1980’s song “True” by Spandau Ballet. Gwen said she was going for the young girl audience by giving him the song because it was swoony like Braiden naturally sings. Blake said it’s an odd enough of a song choice and that they pairing of Gwen and Braiden is the greatest thing ever and thought it worked so well. Pharrell was impressed by Braiden’s “crazy” big note and his controlled runs. Coach Gwen was “just blown-away” by Braiden and called it “perfect”. 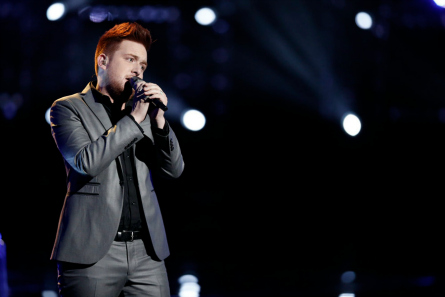 Jeffery Austin‘s song was at number nine on the iTunes charts after last week’s show. “I wanted to take a dance Pop song and make it my own,” Jeffery said by singing “Dancing On My Own.” After his performance, Gwen was crying. Adam said that there’s something about Jeffery’s voice that “you can’t teach that unique quality.” Blake was thinking that Jeffery could win and that would make Gwen the first female coach to win. Gwen said she was blown-away, the moved her to tears and she’s grateful to be part of this. 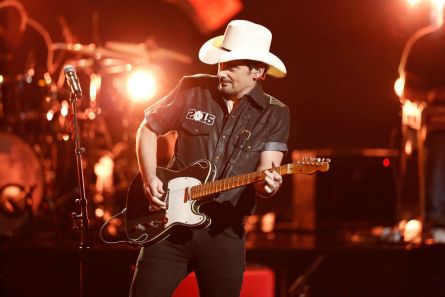 Country artist with twenty-three number one singles, Brad Paisley opened the show with a performance. 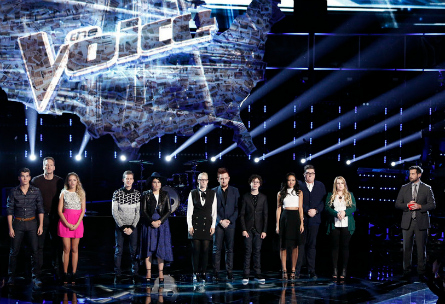 Host Carson Daly brought the Top 11 artsts out onto the stage to reveal the first two saved artsts of the nigh. Every one hit the Top 100 again this week on iTunes, and three of them hit the top three also again this week. America saved Amy Vachal (Team Adam), and Braiden Sunshine (Team Gwen), who is the youngest in the competition.

Blake said as coaches they read on Twitter of people asking why they pick particular artists. He answered that it’s because they pick artists that improve each week in the live shows. Carson Daly asked Pharrell what makes this season special. Pharrell answered that every season the group of artists are better each year. But this year, there’s been a lot of “super-magical” moments.

The remaining nine artists came back out onto the stage. Jordan Smith said the message of his song on Monday night is a good reminder that it’s important to stay true to who you are in all situations. The next artist to be saved was Zach Seabaugh (Team Blake), and from Team Adam, it was no surprise that Jordan Smith is also moving on to the Top 10.

Team Gwen performed “You Get What You Give”.

The remaining nine artists – Jeffery, Korin, Madi, Evan, Emily Ann, Barrett, and Shelby came back onto the stage to find out who was saved next by America’s votes. Evan said he learned to play to your strengths and to give your best and find emotions that give on a grand scale
using music to connect with the audience and with their hearts.

America saved Madi Davis (Team Pharrell). With that, all four coaches have kept at least one artist to move to the Top 10. The next artist saved was Emily Ann Roberts. 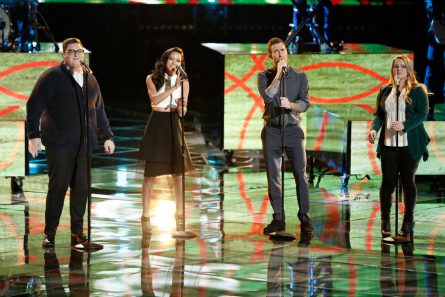 Adam Levine performed with his team for the first time this season singing “Wouldn’t it Be Nice” by the Beach Boys.

The five remaining artists – Barrett, Jeffery, Shelby, Korin, Evan came back onto the stage to hear the next round of saves. Daly asked “The Voice” after not performing for six years. He answered that “The Voice” has changed his entire life because he sees himself as a performer and nothing else has made him this happy.

The last three artists saved by America were: Jeffery Austin (Team Gwen), Barrett Baber (Team Blake), and Shelby Brown (Team Adam). ALL of Team Adam and ALL of Team Blake are moving-on next week!

Evan and Korin performed their “save songs” for the Twitter Instant Save votes in order to move on to the Top 10. Evan sang “Let’s Stay Together” by AL Green The thing that you loved to do “saved you in this life – music and Go
Your only running one race, your own and he’s proud. 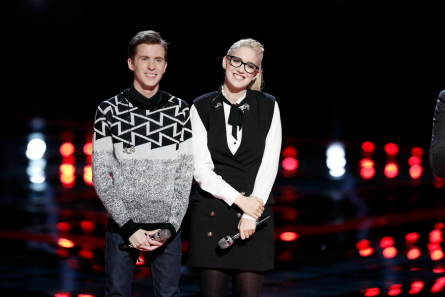 Korin sang “She Will Be Loved” by Maroon Five. Adam said he loved Korin doing his song and he never heard a female vocal on that. He encouraged people to vote for her. Evan was brought back out and the Instant Save voting started and revealed after the commercial break.
At the end of the break, Evan had 46% of the votes and Gwen had 54%. Pharrell advised Evan to continue with music and that “no man can stand in the way of what is yours.” Gwen told Korin that “this is happening right now and it’s so magic.” The Instant Save vote went to Korin Bukowski again this week!. 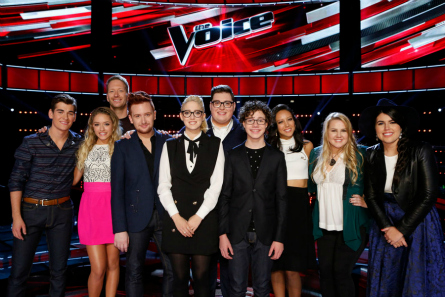 NEXT WEEK:
Sia will perform.