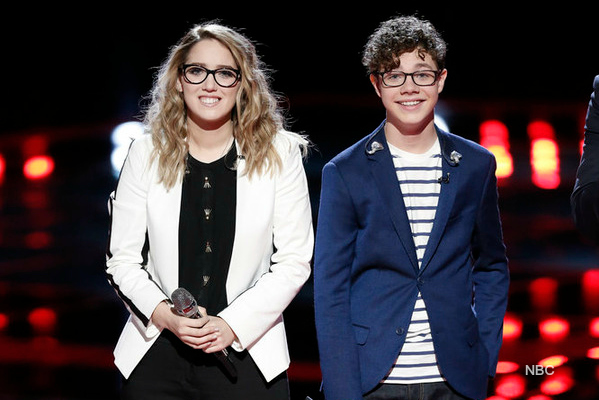 “The Voice” artists who make it though this week will enter next week’s Semi Finals. Jeffery Austin who was working at a desk just months ago, from Team Gwen opened the Top 10 Live Playoffs show on Monday night. 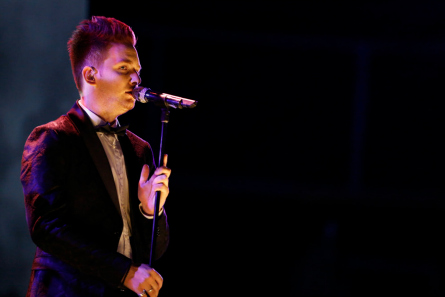 Jeffery Austin sang “Jealous” by Labrinth. Jeffery said that he has to be completely open emotionally and still maintain the musician side. Adam said it was a moment that they were transported away from the competition and called Jeffery unique and his performance “beautiful.” Blake called it “an amazing song” and loves “when the right artist that meets the right song.” He was lost in it and the most “wrapped-up in the performance. Pharrell said he hadn’t heard the song before and he felt Jeffery’s honesty and comfort. People got a chance to know who Jeffery is. Gwen said she was also transported to a different place and it could “easy be the record that he makes”.

Braiden Sunshine sang “Radioactive” by Imagine Dragons. Gwen told him that she can see him make a record like this. Gwen suggested that he cut his hair, and Braiden said he wanted to show people he can do something more modern. He came onto the stage with indeed a shorter hairdo in the back while still long in to and in the front. Adam advised Braiden that he has to “really fill the stage.” Blake said his favorite thing about Braiden is that he’s a throwback to the 1980’s. Gwen called him “punk rock” by cutting his hair. She said he looks 16 now instead of 15 years old with the new hair cut. 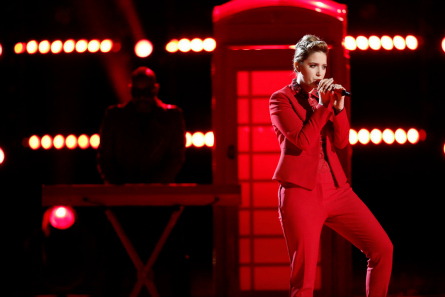 Korin Bukowski was in the bottom two again for the second week in a row last week. She sang “Same Old Love” by Selena Gomez. Pharrell said it framed her voice and moment so well. Coach Gwen said she went to the elevator and went up with her voice “That was crazy! I didn’t expect that!” 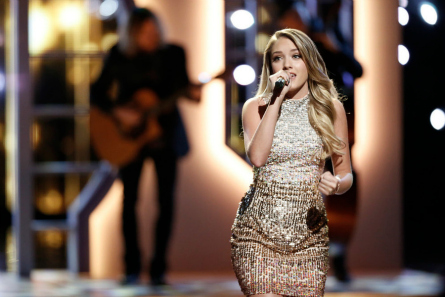 Emily Ann Roberts sang “She’s Got You.” Coach Blake said he never had a better collaborator than Emily Ann and at 17-years-old, she knows who she is. He called it one of her best performances. 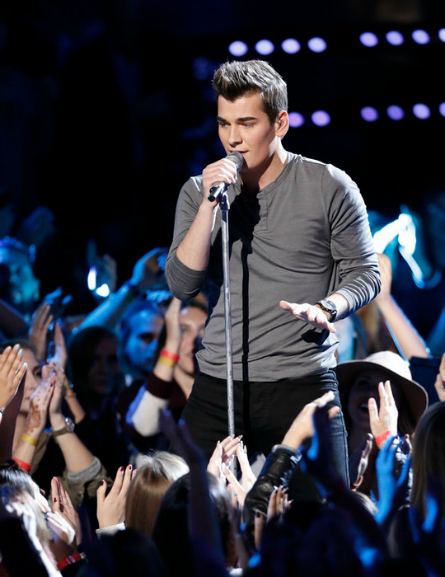 Zach Seabaugh – Blake said everyone is waiting for Zach to have another break-out moment like he did when he performed in the Top 12 like Elvis. He sang “Crazy Little Thing Called Love” by Queen. The crowd was screaming so much after Zach’s performance that all Adam had time to said was “awesome.” Coach Blake said they’ve never heard the amount of screaming from girls before there and it was Zach’s best performance…”see you in the finale!”

Barrett Baber closed-out the show Monday night with “I’d Love To Lay You Down” by Country legend Conway Twitty. Blake predicted that it will be at the top of iTunes. Adam said it was his favorite moment to watch and it was like Barrett was getting back to his roots. It was genuine and so Barrett. Coach Blake pointed to the top 10 of iTunes and said it was “so freakin’ good” and the best Barrett has performed. 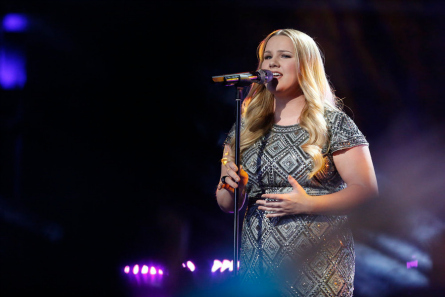 Shelby Brown wanted Adam to give her a Giraffe if she did well last week. Adam brought her “Jarad the Giraffe” to gift to her for her wonderful performance last week. She song a song that she sang at her Grandfather’s funeral. Adam and the audience stood at the end of her performance as Shelby got emotional. Pharrell said it “was honestly the best performance” and she really connected with the lyrics. He called it her best performance. Coach Adam said her potential has astounded him. “Every single week you get better and better,” Adam told Shelby. 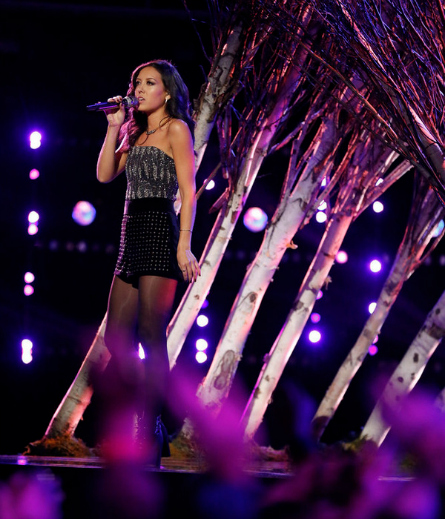 Amy Vachal stayed within her style of taking-on an iconic song and putting her own spin on it by singing “Bye, Bye, Bye” by NSYNC. She said that she used to think it was possible for her to be inducted as the sixth member of NSYNC.  Gwen responded that Amy is set-up to go on tour by covering a bunch of different songs. Adam said Amy’s been able to maximize songs and sing them in a way that is infectious.

Jordan Smith sang “Hallelujah”. Blake told Jordan that every time he gets on stage it’s incredible and topped “The Voice” season five contestant Matthew Schuler’s version of the same song . Pharrell said the only word the comes to mind is “effortless”. Coach Adam said he has a version of the song that he watched and literally would get the chills each time he watched it. 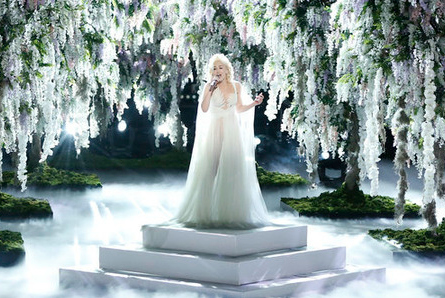 Gwen Stefani performed her latest single “Used to Love You”. 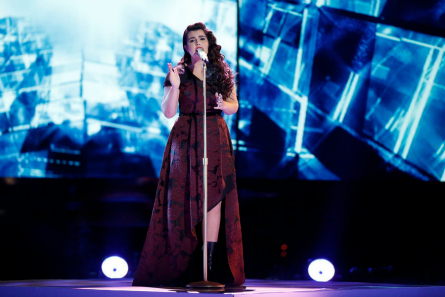 Madi Davis is 16 years old and the only remaining member left of Team Pharrell. She sang Cyndi Lauper’s “Girls Just Want To Have Fun” in a stripped-down version. It’s a song from her childhood that she sings for “girl power.” Adam stated that it’s amazing to see how far everyone’s come and Madi’s version was entertaining, fun and beautiful. Gwen is curious what kind of songs Madi would write and at 16 it blows her mind what she is capable of. Pharrell said “that was sick” and Blake responded that he’s about to buy it on iTunes. 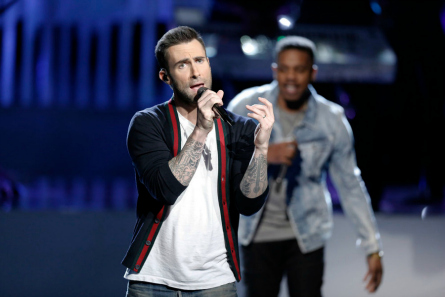 Adam Levine opened the show with a performance with R City. 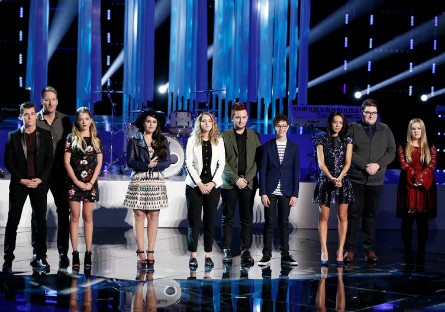 Host Carson Daly announced that seven of the ‘Voice artists’ songs in the top 10 iTunes charts at the close of Monday night’s show. The Top 10 were brought out onto the stage to hear the first results of the night. Daly asked Zach Seabaugh what else does he want to prove to America He said he’d like to give a really solid vocal performance. The first America’s Save of the night was Emily Ann Roberts (Team Blake). The second Save vote was Jordan Smith from Team Adam. 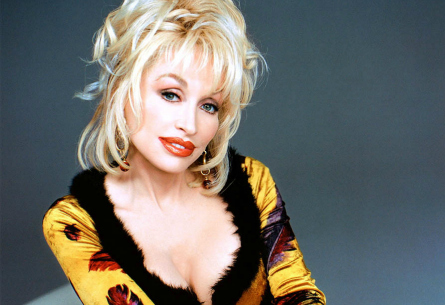 After the break, Blake Shelton announced that Country super-star legend Dolly Parton will be mentoring all of the artists next week.

Pharrell said he is amazed by Madi’s “gift-wrapping” Gwen said for her team, being unique is important and she advised them to just be them. Adam said as a veteran coach, they’ve made a lot of mistakes, and they push themselves to do better and stay inspired.

Carson Daly asked Madi what people don’t know about her. She said she’s learned to just be open and to accept criticism and “that’s how you grow.” Madi said she’s grown on the show by being more open. Carson asked Barrett what’ the one lesson he’s learned on The Voice that he’d pass on to his students. Barrett answered that to “have a distinct plan for your life. That “it’s okay sometimes to run into the unknown and don’t be afraid of what that is…Sometime it works out well.” The next artists announced as saved was Jeffery Austin (Team Gwen), Barrett Baber (Team Blake).

Braiden said if you had told him that he’d be on The Voice a year ago, he’d tell them they’re crazy, and he’s grateful to be on the show. Carson asked Shelby about her emotional moment on Monday’s performance. Shelby said she hadn’t had a moment to emotionally connect with a song. She said she did that last night and connected with the lyrics. Two more saved artists announced were: Madi Davis (Team Pharrell) and Amy Vachal (Team Adam). 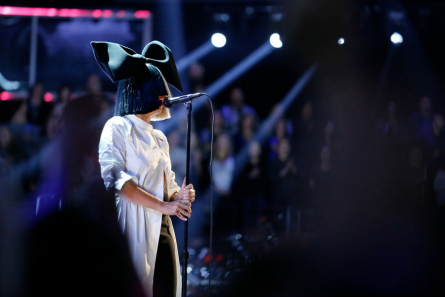 The remaining four artists came out onto the stage to hear the next round of saves. They were: Zach Seabaugh, Korin Bukowski, Braiden Sunshine, Shelby Brown. Carson asked Korin who’s been in the bottom two for the past two weeks about that. She said “many people love me” which is why they saved her and want to see what else she has to offer. “There’s a lot of fight in me and still a lot of fight left in me.” America saved Zach Seabaugh, and Shelby Brown from Team Blake. With that, all of Team Blake is going to the Semi Finals. 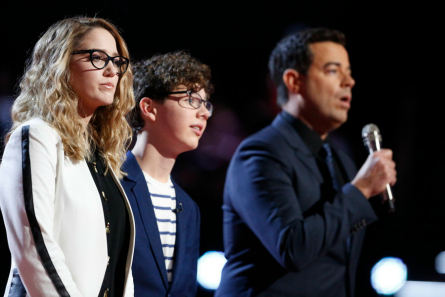 That means, once again, Team Gwen’s Korin was in the bottom two along with first time in the bottom – Braiden Sunshine, also on Team Gwen. They had to perform save songs. Korin performed “Try” by Colbie Caillat for her Instant Save song.

Korin forgot the lyrics three times while singing her Instant Save song. The coaches quickly came to her rescue. Blake said “are we going to forget our lyrics sometimes? Absolutely!” Blake also said Korin deserves to be in the competition. Pharrell said forgetting lyrics happens to all of them “America saw who you are – someone who gets knocked-down and gets right back up.” He said she got back in the ring and fought. Coach Gwen said Korin is “deep..she’s real.” She said Korin has really come out of her shell and is unbelievable and awesome.

Braiden sang “Harder to Breathe” by Adam Levine’s group Maroon 5. Adam responded that Braiden was “fantastic” and he wrote that song for a back against the wall moment and it was the perfect opportunity for Braiden to use it. Gwen said he’s getting “looser and looser and more tapped-in” and it’s an honor to know him.

The Twitter Instant Save Votes revealed that Braiden was leading with 51% to Korin’s 49% of the votes. Braiden told Gwen that he got more confidence by Gwen turning around for him, a 15-year-old in the Blinds and he can never repay her for that. The final words she gave Korin was that just knowing her has been “equally inspiring for her” and they are similar and “on the same journey” because she connects with her. She stressed that outside of this, they have so much and this is “just a show.” She called Braiden very special and he will continue to grow. 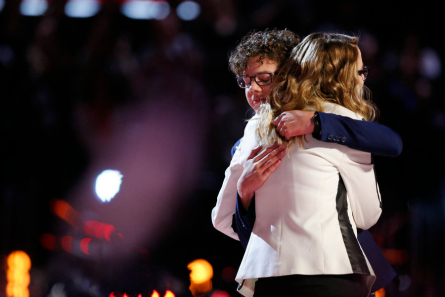 America Instantly Saved Braiden Sunshine who is moving on to the Semi-Finals.