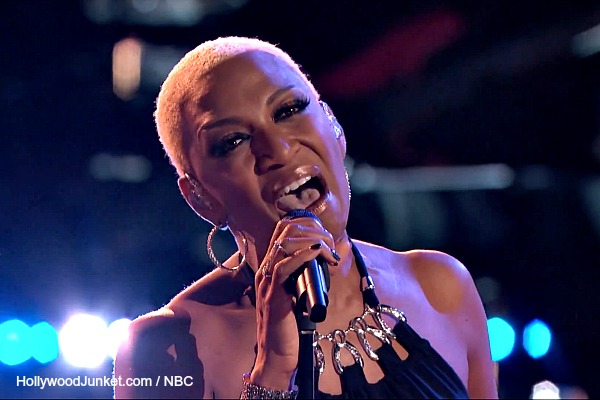 NBC’s singing competition show “The Voice” just finished its “Battle Rounds” and now moves on to a new turn of events, “The Playoffs”. Coaches, Blake Shelton, Shakira, Adam Levine, and Usher all must decide what three artists out of their five each to keep and take to the live shows which begin filming on April 21st. Blake was the first coach up. He had to hear all the members of his team sing individually a song of their choice, then at the end of the night decide which two would not be moving-on.

Audra had the difficult task of being first one to perform tonight on Blake’s team. After her performance, Usher commented first. He said, “from the moment that you introduced yourself to the world we all realized that you have a very powerful voice. It comes naturally.”

Shakira reacted, “that was very beautiful. Your voice is very powerful . I really believed it. You were really giving your 100 percent and it showed.” Adam admitted that it pained him to say the following, “because I hate Blake so much, it’s really hard to say positive things to his team. I want to see that beast performer in you. You’d be unstoppable. I don’t know why I’m telling you this. I’ll shut up now.”

Coach Blake expressed his admiration for Audra, “sometimes people have a great audition then their never great again. The thing that gives you an edge is you know that importance of this playoff. You definitely have the other four sweating it out. It’s going to be a tough decision for me.”

Back stage Adam said Audra has never shown any weakness, and that he considers her a strong contender.

Ryan is an ex garbage man. He decides to takes a risk by choosing to sing a big song. At home, he was juggling being a garbage man and doing gigs. The song he selected was, “Second Chance”. Ryan said he picked that song because it came out when his parents gave him an ultimatum of going into the Army. Blake said “He picked a song that is a tough song” and that he worries about him “blowing it out”.

After Ryan was done singing, Usher said, “Only one other artist that can hold notes like that and it’s that guy down there (pointing to Adam). Definitely a break- out moment for you. Moving in the right direction.”

Shakira noted he wasn’t perfect, “You did fantastic today. Your voice did so good on those high notes. Not perfect, but no one is.” Adam was still gushing over Usher’s compliment, “I’m still wheeling from Usher’s flattering,” then told Blake that he wants to file for a “bro vorce.” Adam then critiqued Ryan, “It seems that Ryan has the most incredible professional moments.”

It’s Time For a Brovorce!

Coach Blake said, “It takes him a second to catch his voice. I’m overwhelmed with excitement and pride and heart ache” Blake said because he makes it that much harder for Blake to decide his final team.

Ryan said hopefully he gave Blake enough ammunition to keep him for the live shows. Blake and Usher were talking to Adam afterwards and Blake said if Adam was a man, he’s sound like Ryan.”

Madilyn is a Junior in high school who loves to make short films and sing. She chose to sing “Clarity” by Zedd featuring Foxes. Blake said Madilyn “surprises you and hits those big notes.” He told her “this is your last shot”.

After her performance, Usher reacted, “I’m more than aware of what Madilyn is capable of. In a short amount of time, Blake has helped you find a different approach. That’s what it takes to be a well-rounded artist.”

Shakira stated, “It’s a very difficult song. You managed to be powerful. I heard some pocket issues.” Adam said, “the one thing I got to tell you is you got to let go. At some point you have to say I’m prepared for this, now I have to got out here and do it.”

Blake, who stole Madilyn in just the previous episode from Usher said, “I cant be more confident and proud that I used my steal on you.” Back-stage, Blake said about Madilyn, “I don’t think this is the best she can do but I still believe in her.”

Also while back stage, Blake told the other coaches about the frustration of having to weed-out his team, “You guys don’t want to do what I have to do. You get five of the best then you have to take two out.”

Shakira said Jake will win everyone over. Blake said “Jake is the real deal.” Jake chose to sing “Anywhere With You” dedicated to his girlfriend he said who treats him like a “skinny man.” Blake said Jake has the ability to pick good songs.

Usher said, “How do you think you did?” After Jake’s response. Usher said, “If you don’t believe it, no one will.” Adam said, “you were all jacked-up on Mountain Dew up there. Listen – Shake and bake, Shake and Blake. I’m so proud to see how far you’ve come!”

Blake was a very proud coach and commented, “I want to thank you for being the real deal. He doesn’t say where, he says “Whare.” Adam told Blake, “He’s more country then you!”

While on stage, Jake said to Blake, when his Dad looks at you and says something, he means everything he says. Blake said Jake is one in a million.

Sisaundra said the song that she picked, “New York State of Mind” reminds her of “living in New York and all the sacrifices I’ve made by being on stage.” Blake told her, “I want you to perform this like you perform everything.” That, she did!

Usher responded by flashing a wide grin on his face and said to Sisaundra, “You see my face right? How did you end up with this dude? (Blake) Man I’m blown away. You are a teacher. The amazing artist you have become and the one you will be.”

Shakira said, “You have the kind of voice that makes us all go ‘hugh…hugh’ and look at each other. You have a certain glam to your voice that is different from anyone else in this competition. You’re elegant. I really hope you make it to the live shows.”

Adam had to point-out one mishap, but Blake know exactly what was going on. Adam said, “When you sing, you get lost in it. But how incredible your technical skills are. Leading up to that first course, it was kind of behind, and jazzy.”

Blake responded to Adam’s observation with, “That was her way of saying I’m going to make them think I’m out of pocket, then grreah!!” Blake then said about Sisaundra, “When I talk to you I talk to you from here, (he holds his heart).” Usher asked if he ever makes her do runs. Blake answered, “where I come from, the runs is a bad thing!”

It was the moment of the night that Blake was dreading, when he had to let three members of his team go and send them home. Blake said to his team, “This moment is the toughest decision I have ever had to make in the six seasons. I think the world of all of you.”

The New TEAM BLAKE: SISAUNDRA LEWIS, JAKE WORTHINGTON, AUDRA MCLAUGHLIN – Are going to the live shows!
In this order, Blake chose to keep: Sisaundra Lewis, Audra McLaughlin, and Jake Worthington. Blake said “I truly believe Jake, Sisaundra, or Audra could win this whole thing. You other coaches had better watch out!”

Next week it will be the other coaches turn to select their three artists that they will be taking into the live shows.

Watch THE VOICE season 6 episode 17 “The Playoffs Premiere” first aired by NBC on Tuesday, April 8, 2014. This full episode is now available at HOLLYWOOD JUNKET until 06/19/14 courtesy of NBC. ENJOY!