Former “The Moment of Truth” and “Antiques Roadshow” host, Mark L. Walberg is taking a shot at hosting a new dance show pilot.

Contestants are brought-in from all over. Some from viral video fame off the web via YouTube. Their challenges consist of dancing to music videos such as Michael Jackson’s “Thriller” or ‘N Sync’s “Bye Bye Bye”. They are coached by professional choreographers. Studio audience votes for their favorites. 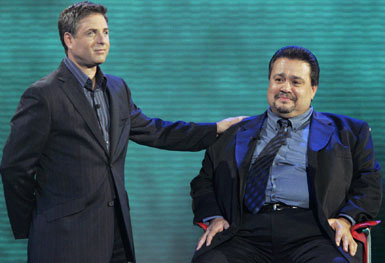 “The Moment of Truth” was a stretch for nice-guy host, Mark Walberg (left) seen here with a contestant.

This show may seem out of place for Walberg’s hosting history. However, “The Moment of Truth” was a bigger stretch for the popular and genre varied host. While on the set of the controversial FOX show that exposed contestants hidden secrets, Walberg once stated that he had a hard time with asking certain questions of contestants and that he felt that his morals were often compromised by hosting the show.

More information on Walberg’s new dance show venture to come as we get it.