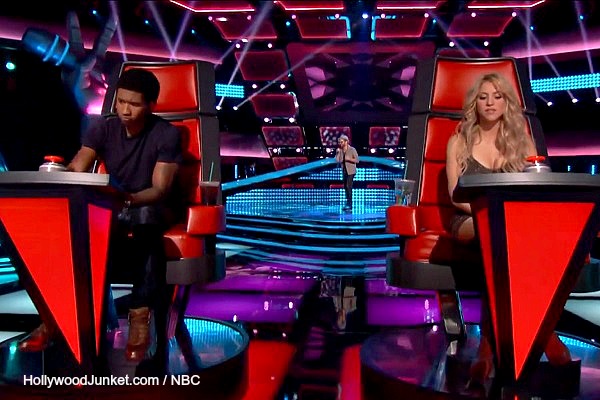 A Victory in Her Future:
Paula DeAnda – Team Blake Paula is from San Angelo, Texas. She made a single and went to all of the local radio stations to ask them to play it. A few did. Paula said she recorded in English and in Spanish. “The Voice would be a rebirth” for her singing career she said.

Adam said there were some problems which is why he didn’t turn around. Shakira said she liked Paula’s high notes and is convinced that under her coaching, Paula will improve “100 percent. You and I are going to work so hard. Two weeks from now you’re going to go ‘wow’, how did I improve this much.”

Blake said he has family in San Angelo, West Texas. Adam told her not to believe Blake. “I see your ability to attack. I don’t think you’re afraid to try anything.  I see a victory in your future and it’s only in this lane,” Blake told Paula. Jake said he was always in sports in high school. He always got stage-fright so no one ever knew he could sing. He put a video up on YouTube in 2010 that landed him a manager in New York. He called it quits and currently works as a bartender. “The Voice” blind audition will be his first live performance.

Singing “When I was Your Man”

Adam said if that’s how good he is on his first performance, than he can achieve even higher. “Man, I should coach you because I know what you need to do.  Let’s do it,” said Adam.

Usher told Jake, “I see you as one of the greatest voices on my team. I’m going to help push you and make you one of the winning circles.” Shakira said the male coaches are like “Alpha Dogs. You can allow yourself to be vulnerable with me.”
Usher’s competitive response to that was, “Do you want a Mom or a mentor?” Shakira kept-up her fight with, ” I know how the game works and I am convinced I can win this season. I need someone like you.”

Jake picked Team Usher. Shakira and Adam joked that “it must be the shoes” referring to Usher’s gold-toned sneakers.

Luke got into music at age nineteen. He joined a local band and started taking drugs. When he found out he was going to be a Dad, he got clean. He left his band when his son was six months old. He now has full custody of his son and works as a nurse in a psychiatric ward. He said he will always be a musician. “This is my last hooray with music and I hope it works,” said Luke.

Blake told Luke “Man I thought you sang it pretty good. For me personally I thought you were singing in you head, in your nasal area.”

Shakira said, “There were great moments. But there were other moments that weren’t as controlled. That’s why I didn’t turn.” Adam’s reason for not pushing his button was, “It was masked a lot by some things.”

Usher said, “Great performance. You came out with a great attitude. When you hit those big notes, I was like, I don’t know should I do this” (referring to hitting his button).

Usher said he felt regretful he didn’t hit his button because Luke had a unique sound, but he only has one slot left. Ria is 19-years-old. Her mother is a dancer and owned a dance studio. Her mom became her “Momanger”. Ria currently works as an ear-piercer at the mall. Her Mom had to close her dance studio and things have been rough for her family. Ria says “The Voice” is a much needed opportunity for her family. “To have this opportunity now- it’s unreal.”

Shakira beat Blake to the button within seconds. “I think you started singing better when you decided that it wasn’t going to happen” Blake said. He said she really opened her voice up then. He then said, “There’s no reason to go on and on about the fact that I’ve won this show a bunch of times,” in his quest to sway her to be on his team.

Usher and Adam played commentators to Shakira and Blake’s battle over gaining Ria for their teams.

In Shakira’s corner, Adam called Shakria a “she-wolf”. Shakira said “When I heard that raspiness I realized the singer that I’m dealing with. You’re like a pearl in an Oyster. I’m going to take that shell and pry it open, polish the pearl up and show the world what a jewel you are.”

Adam and Usher both endorsed Shakira. However, Ria chose Blake. After that, Blake tried to turn Shakira against Adam and Usher by saying they did her a dis-service by making a mockery of her. Blake said “I don’t think they like you Shakira.” Cierra is 23 years old from Alaska. She got into music by singing in the choir. She works for her dad as an Administrate Assistant. They help relocate families in the military to Alaska. She said Alaska doesn’t have any opportunities for singers. “This opportunity is bigger than anything I’ve ever done,” said Cierra.

Usher waited until Cierra hit her last note to push his button. Blake was very upset and called what Usher did a “foul”. Then Shakira said, “Hold-on a sec, I just want to tell you something,” then got-up out of her chair to walk over to talk to Cierra. She hugged her and talked to her a little bit and told her to make the right decision.”

Blake told Cierra, “You voices kept getting stronger and stronger. Every time I thought I heard everything I thought you were capable of doing there was another layer. I didn’t wait too late like Usher did!”

Usher told Cierra, “It’s not fair that Shakira decided to have the connection with you when I know that the connection we’ll make will be so significant for your entire careeer.” Shakira said “All I know is that she can win this thing with me as your coach.”

No Way He’s Not A She!
Tyler Montgomery

24 year old Tyler is another singer with a raspy sound. He says he has a raspy, high-toned voice. His mother got him into music and would dress him up like Elvis – in cape. He saw his father’s body burned after he was a victim to a house fire. Tyler got really depressed and just wrote music and played guitar in his room. He said he’d like to give his fiance security and settle down. Tyler currently works as an auto mechanic.

“This show is the perfect platform The passion I got for music was through my father. This moment really could be a defining moment and really to give it all a reason,” said Tyler.

After his audition ended, the chairs turned to reveal Tyler’s identity. Blake stood-up in shock. “That wasn’t you…That wasn’t you!” Adam yelled, “You’re a man! I thought there was no way you are not a woman”. Usher said he was back and forth on – “Is it a boy or is it a girl?”

Adam said, “At the end of the day you have to have a stellar performance to pull it off (singing Stevie Wonder).” He told him to come back and do it again because it could work out for him. From Tulsa, Oklahoma, Alaska and Madi met in a singing group called “American Kids” In 2011 they won the National American Competition. Blake was a former winner himself. They showed a photo of him after he won and he wore a mullet. They said if a ‘Voice chair doesn’t turn, they will go their separate ways.

Adam said “WHY do you have to be from there (Oklahoma)!”, followed by, “I know I’m screwed here. But part of the show is knowing that you can overcome- so that’s what I’m going to do here.” He pointed out that he liked them before “cowboy” (Blake) because he pushed his button first.

Blake fought back with “It’s a completely different thing when something’s meant to be.” Then he compared them to ‘Pistol Annie’ which they loved very much and were greatly flattered. “I don’t think I’ve met anyone else who was from Oklahoma Kids since I was back there,” Blake said.

Adam said, “Sometimes you have to go against the grain. You’re in Los Angeles, that’s where I’m from.”

Having Enough Air in Her Voice:
Ddendyl – Team Shakira Ddendyl is 25 and lives in D.C. She said the cows outnumber the population by 10,000. Her dad plays rare instruments like the bag pipes. She started singing at age five when her Dad would test her on how many notes she could hit, and started training at age eight.   Ddendyl is a lounge singer in D.C. for five days a week. She said he only sings for few people at a time as a lounge singer. “It would be so amazing to work with any of those coaches and make my real dreams come true,” said Ddendyl.

Singing “Stand By Me”

Shakira – I love the air in your voice, the quality of your voice.. ” She was then interrupted by Blake who was laughing. But she didn’t get why the boys were making a big deal about her saying “air” when describing Ddendyl’s voice. Adam said, “please don’t say ‘airy’. Shakira finished with, “You voice is very different than any other voice that I’ve been listening to so far. I’m so happy you’re part of my team now. we are going to do great things. I’m sure you will be very successful on the show.”

Usher who looked like he wanted to hit his button, but did not, told Ddendyl, “You have a very unique tone and I’m happy that you did make it to the show and Shakira is going to make an incredible coach for you.” Josh is 38 years old. He’s a father and a husband. He is a working musician. He went to get a degree in Philosophy to teach at the local college but ended-up giving lesson on the SAT’s. He chose to sing “One More Try” he said because it’s for his one more try.    “Where I’m at in my life I need to have this happen right now,” Josh said.

Adam said “Damn. George Michael is such a bad-ass That is such a hard vocal to master!” Blake said, “Your amazing, incredible. What kind of music do you see yourself singing?” Josh answered, “Old soul.”

I’m a connoisseur of music but the one that I always stay connected to is soul music,” Usher said. Adam said he’s, “Guilty of passion in the third degree”

“I’d love to have an artist like you where your voice is so mature. I think you are the real deal. I hope you pick me as your coach because you are the artist I’ve been waiting for,” Shakira told Josh.

Watch THE VOICE season 6 episode 5 “The Blind Auditions, Part 5” first aired by NBC on Monday, March 10, 2014. This full episode is now available at HOLLYWOOD JUNKET until 09/21/14 courtesy of NBC. ENJOY!

Check out all the “chair turners” from THE VOICE season six episode four, “blind auditions” in our article Pleasantly Opposite! THE VOICE – Blind Auditions Night 4 Recap http://hllywdjnkt.co/the-voice_s06e04