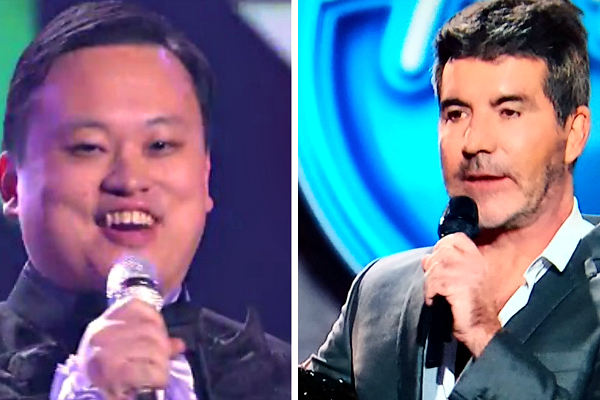 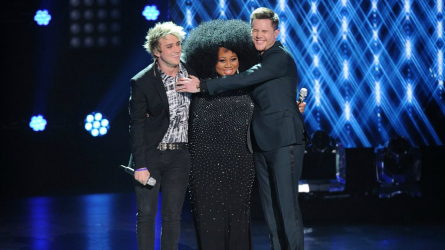 Tonight’s “American Idol” opened the series finale with a voting cross-over by the President of the United States. Barack Obama stated that the show is responsible for teaching Americans what “pitchy” is, as well as millions of Americans on voting. Hint, hint…Americans, get out and vote!

Then, season 15 ‘Idol Top 10 took to the stage to sing “One Voice”, soon joined by rows and rows of past ‘Idol winners and contestants. Then, “American Idol” host Ryan Seacrest came out onto the Dolby Theater stage in Hollywood to emcee the last ever “American Idol”.

He was soon joined by his season one co-host Brian Dunkleman who was an incredibly good sport about his career, or lack of. “Looks like after tonight, you’ll be unemployed,” Dunkleman told Seacrest who quickly reminded him of his radio show and other projects. Dunkleman continued, “I just wanted to stop-by and congratulate the show on struggling another 14 years without me.” All joking aside Dunkleman then genuinely told Seacrest that he’s done an “amazing” job hosting the show. They then hugged it out!

Seacrest announced that the “American Idol” finale would run six extra minutes of air-time in order to announce the winner of the series finale. Inside the theater, the audience warm-up host stated that seated in the Dolby Theater was 3,500 people!

LA’PORSHA RENAE & TRENT HARMON sang their duet “It Takes Two” song. During their duet, clips from their time on the show played on multiple screens behind them. Fourteen years earlier, it was Kelly Clarkson and Justin Guarini who performed the first ever ‘Idol duet. After the duet Seacrest asked La’Porsha and Trent if they were nervous, excited? Trent responded “yes!” La’Porsha said “same.”

Executive producer Nigel Lythgoe was very prominent in the Dolby house as he was busy at work. Backstage mentor Scott Borchetta stated “Jennifer called this.” Several weeks ago, Jennifer said it (the finale) would be Trent and La’Porsha. He reacted “I couldn’t be happier. I’m so proud.”

Another performance by past idols followed Borchetta’s interview. This performance included Colton Dixon, Jordin Sparks with Justin Guarini. This medley blew the roof off with Meghan Trainor’s “No” song.

The live crowd had to go without having Kelly Clarkson there in-person, due to her having a baby. But, she did pre-tape a fantastic medley of all of her hit songs for the fans during her previous visit on the show.

Judge Keith Urban had an unforgettable performance of a duet with another Idol winner Carrie Underwood. They sang “Stop Draggin’ My Heart Around.”

More past “American Idols” performed more medleys that included a rock song, a soul song and a country song. Some of the past ‘Idols during this performance were: Scotty McCreery, and Constantine Maroulis who happen to perform in both medleys.

Harry Connick Jr. brought out a very talented young girl from his school “Alice Marsalis” to sing with him onstage. The “Idol Gives Back” charity was a big part of the message during this performance.

More past “American Idol” singers were featured, this time more intimately as each of them sang with equally talented musicians one-by-one. Returning were Katharine McPhee, Clay Aiken, Ruben Studdard and Jessica Sanchez who belted-out the ending amazingly! 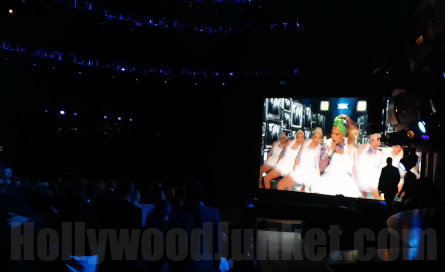 After Jennifer Lopez’s show-stopping performance (also pre-taped for the live audience) that started with ‘Ain’t Your Mama’and finished with “Let’s Get Loud”, Seacrest talked to Trent’s mom Cindy. He asked her what it felt like to be there. “It’s absolutely unreal. We feel so blessed to be here. It’s like a dream come true,” she said.

Trent Harmon told everyone of his earliest memory of “American Idol” at the age of 12 and watching season 3 where Fantasia Barrino was crowned the winner. With that, out onto the stage came Fantasia, Jennifer Hudson, and LaToya London to perform together.

When Seacrest asked La’Porsha Renae’s mom about how she was feeling, she replied, “I’m so excited, I’m very nervous. I’m so excited to see her dreams come true.”

Compilation footage of some fun times from past seasons with previous three judges Paula Abdul, Simon Cowell and Randy Jackson. After the playback, out onto the stage came Paula, and Randy. No Simon…or so it seemed at first!! Paula told Seacrest that one of her favorite memories was “hitting Simon”. Paula presented Seacrest with his very own “American Idol” sign since he loves to say “THIS is American Idol!” 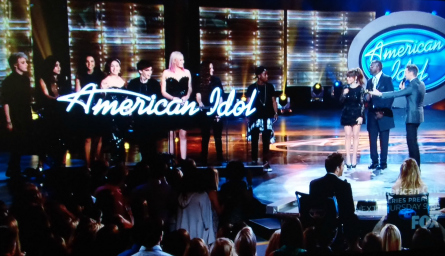 Seacrest mentioned that Simon couldn’t be there and he was a little difficult, mockingly stating “I’m just being honest.” With that statement, Simon Cowell snuk-up on them from behind onstage. 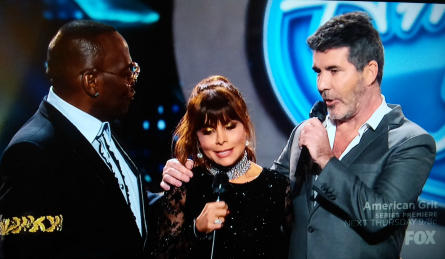 Seacrest, Paula and Randy were genuinely shocked and didn’t expect Simon to be there. Simon said it is a good opportunity for Paula to apologize to the contestants and America for being mean, nurturing and helpful. Paula responded with her usual “unbelievable”. Simon then said he was thankful for America inviting them into their homes, and “without the fans there would be no show.” He told the ‘Idols to “remember the fans who voted for you.” William Hung come out to reprise his “She Bangs” song!

After La’Porsha and Trent were each presented with a brand new Ford car, Carrie Underwood came out to perform the very last time on the ‘Idol stage before the winner would be announced. Carrie said “I’m gonna cry” in regards to the last show. She’s been selling out on her shows, and her tour ticket go on sale Friday, April 8th.

After a commercial break, Seacrest held the very last ‘Idol winner card and read “Trent Harmon” as the winner! Trent reacted weeping with emotion “I know I have a God-given ability. But I didn’t want to take it for granted. I wanted to work so, so hard. And she (La’Porsha) pushed me to do it.” Trent sang his coronation song “Falling.”

Host Ryan Seacrest ended the show by saying it was the end “for now.” This left many fans wondering if the show is indeed planning a return of some kind.