AMERICA’S GOT TALENT: What Audiences Think of Howie!

MINUTE TO WIN IT: Preview of Summer Episodes! 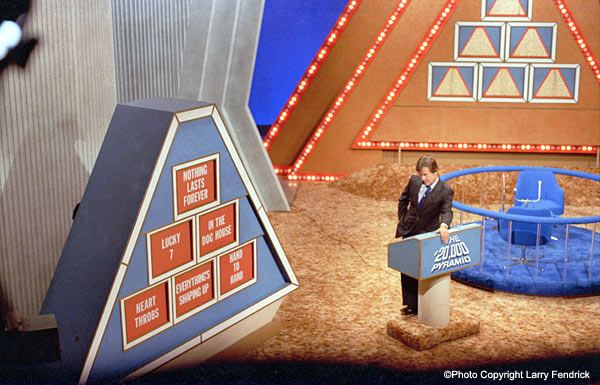 After a nostalgic reel of past “Pyramid” shows was shown, Executive Producer, Michael Davies opened the day’s filming by stating that they chose to keep the game play the same because, “why mess with perfection”, and that “Pyramid” is the “greatest game show in television history”. The new set, he stated, is without an actual physical pyramid. Producers chose to display the pyramid via seven surrounding screens. That new feature, along with “bringing the show to it’s feet” (contestants and celebrities stand rather than sit) is what he explained has entered PYRAMID into the 21st century. 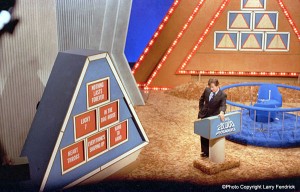 Gone is the physical pyramid on the new PYRAMID game show for CBS.

Special celebrity guests for the two pilot episodes were: Moe Rocca, and Rachel Harris for the first show, and Betty White and Aisha Tyler for the second one, although they were shuffled around for a third show. Producers shot a variation of outcomes and combinations of celebs and contestants, for what I’m guessing, to edit together the best of possible shows to present to CBS.

HOW THE GAME IS PLAYED:
The game is played in a multiple of rounds. The first round, two players compete for “best of three”. Players must guess seven words based on a number of clues that include physical demonstration given to them by celebrities within sixty seconds. During the second set of word answers, contestants have the chance to win a prize if they guess all seven words. Some prizes given out yesterday were a Bravia Plasma TV, and a Canon digital camera. The third attempt determines who will go to the second round, “the winner’s circle”, which is actually square, to name the six topic pyramid answers in an attempt to win $10,000.

Contestants that are trialing get the option to “double down” first which means their word play is twice as difficult and points earned per correct answer are two instead of one. Then their opponent may also choose to “double down” or not when the game goes back to them.

A new pair of contestants are brought out onto the stage to play best of three. The winner goes on to also attempt to win $10,000. The two winners play for another best of three, then that winner plays for the grand prize of $25,000 in which the player must answer all six categories correctly in order to win. The person giving the clues can only do so in “lists” and are not allowed to use physical gestures in this round. Their wrists are held-down by black straps on the sides of the chair to ensure this. Contestants get to keep the money they earned for the correct answers during the pyramid rounds.

Moe Rocca played a very physical game by miming a lot of gestures, while Aisha Tyler used smart verbiage while Betty White stole the spotlight from Richter, which if he’s not quick on his feet will happen a lot by celebrity guests, by telling the audience “don’t mind my back.” Then, “don’t mind my front!”. As well as flirting with one of the producers. White had a slip-up while tying to guess a word that caused for a profanity. Of course everyone enjoyed her immensely.

THE HOST:
Andy Richter surprisingly was left to fend for himself most of the day. He was obviously green to game show hosting, but left with little instruction on point updates and often not realizing what to say next. With a little bit more breaking-in though, I think he’ll be fine. We are pulling for him!

Produced by some of the same people as “Million Dollar Password”, the set was very similar as well as the feel of the whole show. Familiar faces from “Deal or No Deal” and “The Newlywed Game” were also seen on the set. Hopefully having a combination of past successful show veterans on staff might just rub off on this new version of “Pyramid”.