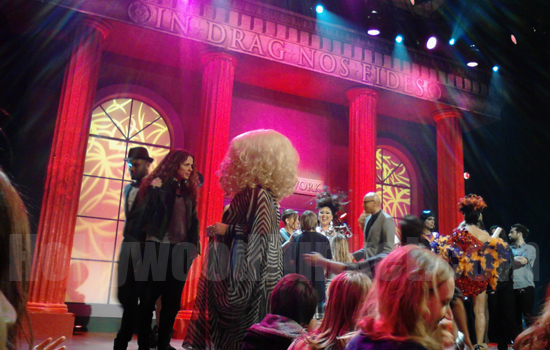 HOLLYWOOD JUNKET was on set during the first day of filming to get a sneak-peek at this season’s contestants during their “draguation ” ceremony. The fashion makeovers were done on a fire woman, a sheriff and a military soldier. These women who were in desperate need of extreme girliness were mentored by Drag U queens Raven, Shannel and Raja (from “Drag Race”).

The celebrity Drag U professors who judged on the women’s performance during their oral “dragxamination” and lip-syncing portion as well as overall improvement were host of the show RuPaul, Lady Bunny, Flex and guest professor Brittany Snow who appeared on the show with a new look – red hair. 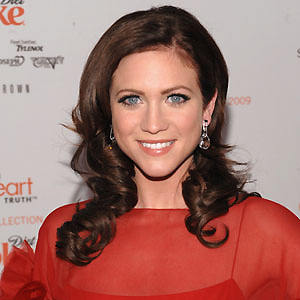 Brittany Snow is a "Guest Professor" on Season 3 of "Drag U".

Each woman competing to be the most transformed and to win the prize of a $1000 gift certificate from Overstock.com had a personal story of a particular incident that made them stop caring about their looks. For Virgina (Empress), the fire woman, mentored by Shannel, it was the loss of a child. For Bernadette (Destiny Del Rey) the sheriff mentored by Raja, it is a partner that she had to overcome the grief of loosing. In the case of the third contestant, Christine (Belle Surpreme) mentored by Raven, the soldier, she had to find a way to reintroduce her feminine side when she is off-duty and to get back into the dating scene. She said this is difficult when her everyday wear at work is fatigues.

Each contestant competes on stage with their own Drag U stage name and decked-out in full show-girl style and glam gowns with heels. Each contestant said that the most challenging part of the competition was walking in high heeled shoes. Christine especially had a difficult time while on-stage wearing a high-heeled strappy black number which forced weight towards the front of her feet. While on-stage she suffered numbness in her foot and the producers of the show had to stop temporarily while she was taken back-stage to revive her feet and take a break. Her mentor Raven re-introduced her back onto the stage approximately fifteen minutes later when she came out with different shoes- high heeled boot style shoes. Lady Bunny commented on the ladies heels that these shoes are not four-inch heels- “that’s Payless. These are six-inch heels” she said.

The most entertaining transformation of the night was by contestant Bernadette who works as a sheriff. She gave a particular interesting walk down the runway and caused for much applause and comments from the Professors. When they questioned her on her walk she said that it was her interpretation of what her mentor Raja told her and showed her. Lady Bunny commented that when she saw the walk at first she thought she “wanted to make a citizen’s arrest” but then she thought it was more like a case of “disorderly conduct”.

The contestants’ final round consists of all three of them performing a lip-syncing number in which they each had to perform together singing “She Works Hard for the Money” by Donna Summers, then deliver a line from the song separately. They performed three times for the taping. Only one will be aired. Based on this round, previous rounds as well as overall transformation, the professors deliberate to decide who wins the competition as best “draguate”.