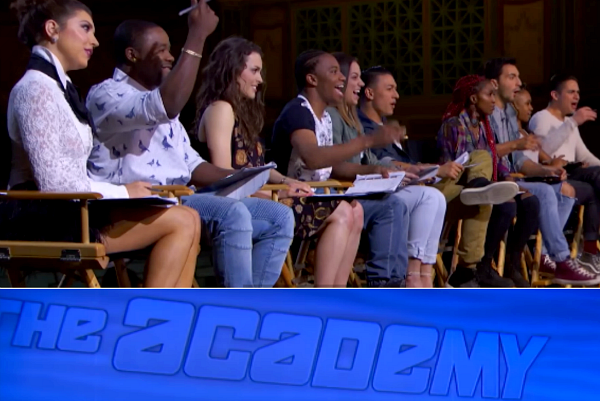 This was the week where the talented child dancers really got their chance to shine and show their perspective All-Star coaches what they’re made of. Some fell under the pressures of learning a different style, while others embraced it and blew-up the stage.

Maddie Ziegler was at the Dance Academy, but not as a judge yet. She was there to support the child dancers by interviewing them. Kids at the Dance Academy had to compete in styles that they had not done before. How well they transitioned helped the All-Stars to decide the cuts they would make on their teams.

All-Stars put together teams of five. Out of those five, they chose only one child dancer to continue with them in the live SYTYCD weekly competition shows. The All-Stars had to select five talented dancers that would make-up their Teams where at least three of the five had be in their own style and up to two “Wild Cards”.

The choreographer who worked with the kids at the Dance Academy this week was Warren Carlyle (who taught them a Broadway number). Then next week, the kids will learn Hip-Hop from Napoleon & Tabitha (NappyTabs), and Contemporary from Travis Wall.

To determine the five dancers the All-Stars each want on their teams, dancers had to perform a solo to start-off. Only 50 dancers (half) would continue on in the competition after the first day of Solos. After their solo round, All-Stars called to the stage the dancers who had been chosen by one or more All-Stars one-by-one. If two or more All-Stars had chosen a dancer, the dancer then got to decide the All-Star that they’d like to be on their Team. After going onto the stage, the dancers found out who chose them by seeing which All-Stars’ lights turned on. By the end of the week, the All-Stars will whittle their teams down from five to just one remaining dancer which will happen in next week’s episode.

Dancers were chosen to perform based on their styles. So, the first style to perform was for contemporary All-Stars Kathryn, Robert and Sasha.

The first contemporary solo of the day was Tate. The All-Stars were mesmerized by Tate and said they emotionally felt something from her performance. Both Sasha and Kathryn turned their lights on for Tate.

They each had to persuade her to be on their team. Sasha said she wanted Tate because she also loves to tell stories with every part of her body. Kathryn stated to Tate that she had to stand-up because she was shaking with how inspiring Tate was and would be honored to have her on her team. Tate chose Team Kathryn.

Robert was super-excited to be the only All-Star to turn his light on for Sage. The contemporary All-Stars finished filling their teams of five quickly. The two remaining contemporary dancers left were both thirteen-years-old – Jordan and Ava, who is 5’10” in height. Jordan got Sasha’s last spot on her team. 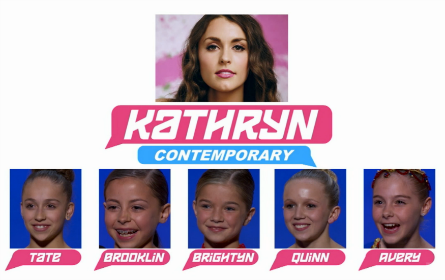 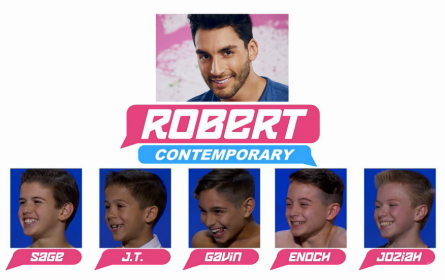 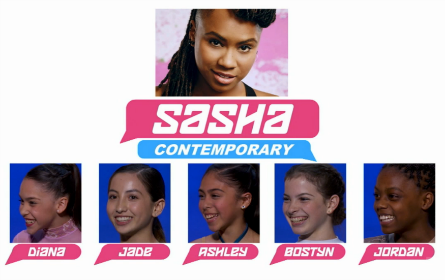 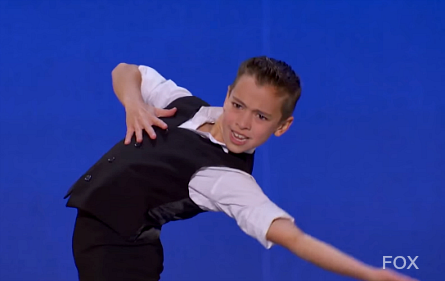 The next genre was ballroom. Ballroom All-Stars were Paul, Jenna, and Jonathan. The first ballroom solo was by 12-year-old Jake who barely snagged a golden ticket after his audition. Fortunately, he scored big time with his merengue dance. The All-Stars were up on their feet cheering. Jenna was clearly a big fan, and got him on her team (after he asked her if she has a boyfriend). 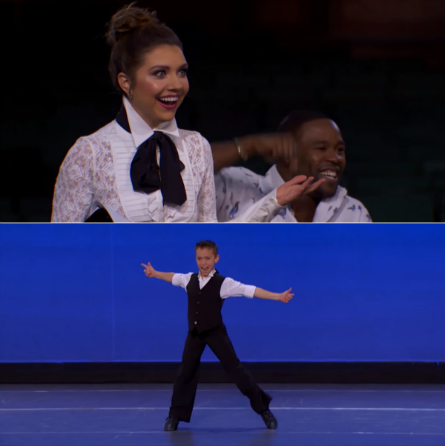 Paul and Jonathan had to work to try and get Ruby on their team. Ultimately, Ruby decided to go with Paul. 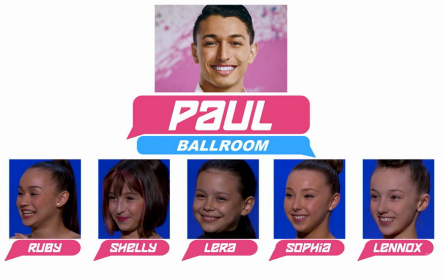 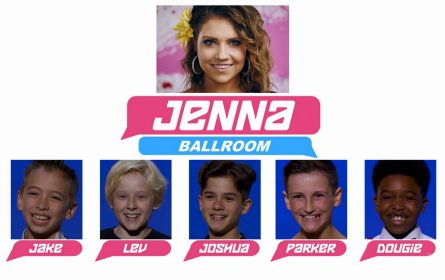 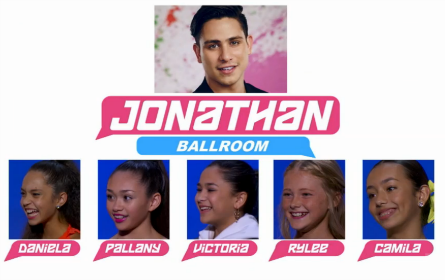 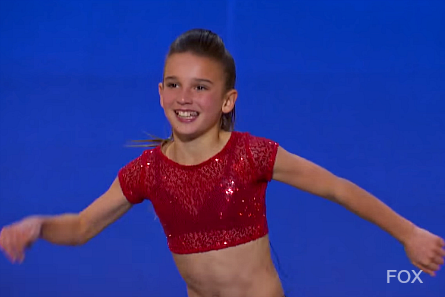 Next, it was time for Tap and Gaby had the only team in this category. She scored tappers: Emma, Jazzy, Ryan, Ava, and Lucas. After Emma’s solo, Sasha said she was “the definition of fire cracker.” 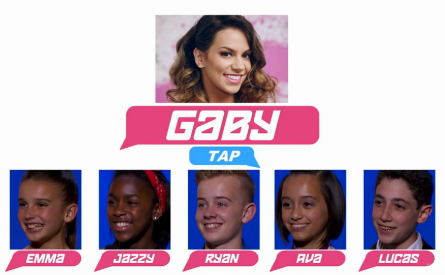 Hip-Hop style had three All-Stars: Fik-Shun, Joshua, and Comfort. Both Joshua and Fik-Shun wanted Kida on their teams. Fik-Shun said because he sees a lot of himself in Kida. Joshua said he has more of a broad spectrum of dance and can mold him more Fik-Shun won Kida on his team when he told him “together, we can take over the world!”

There was one spot left in the top 15 on Comfort’s Team. The kids were hoping they’d make Comfort’s Wild Card pick. However, it was Phoenix who got her last spot. Fifty other dancers went home. 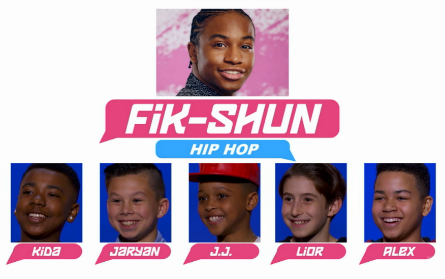 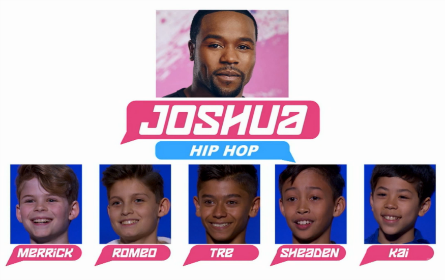 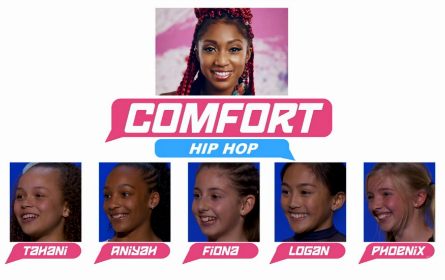 Dancers Ruby (Team Paul) and Sage (Team Robert) were paired together. They both blew the All-Stars away. Then, there was J.T (Team Robert) who forgot some of his moves. However, Robert decided to let him stay to give him another chance, and cut Enoch instead. Paul cut Lera from his team.

Day two at the Academy had dancers from teams Jenna, Comfort, Gaby and Sasha showing-off what they learned from Warren Carlyle’s Broadway choreography. Sasha noted that when deciding to who she’d keep, Jordan “brought out a fire she didn’t know she had” and caught her eye.

Unfortunately, the dancers who got cut were: Kia from Team Joshua; Diana from Team Sasha; Ava from Team Gaby. Then, there was Jaryan. When hip-hop dancer Jaryan was challenged by the Broadway number in front of his All-Star Fik-Shun, he threw-in the towel. This cost him is place on Fik-Shun’s team. Jaryan told everyone that he is bullied at school. Fik-Shun responded that there’s no bully in dance. This is about love, support and having fun. Fik-Shun then comforted Jaryan and walked him off of the stage. The All-Stars were left crying with emotion from Jaryan’s struggle.

NEXT WEEK: The 40 dancers remaining will learn hip-hop choreography from NappyTabs and Contemporary from Travis Wall. Then, by the end of the show, each All-Star will have their final selections of the one dancer each that they will take to the live shows that will round-out season 13’s Top 10.