THE VOICE: Season 3, After The Blind Auditions Round One Interviews!

NBC’S REVOLUTION Spins Up! But Will It Spin Out? & More Today

THE VOICE: Season 3, After The Blind Auditions Round One Interviews! 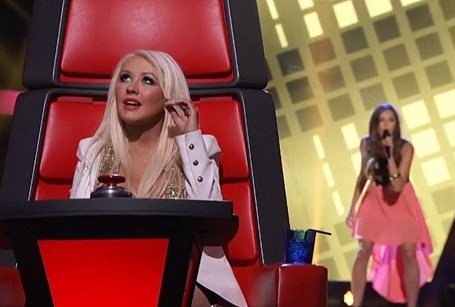 “The Voice” returned for it’s third season with a whole new slew of fresh, and unique stand-alone talent. How do they keep doing it? Well, it turns out, some of the contestants are found and encouraged by show producers. Still, some others like Daniel Rosa are asked to return from a previous audition. During round one of “The Voice’ auditions, coaches Christina Aguilera, Adam Levine, Cee Lo Green and Blake Shelton saw great raw talent that included: Trevin Hunte, Daniel Rosa, Terry McDermott, Bryan Keith, Joe Kirkland, Gracia Harrison, Devyn DeLoera, and De’Borah. 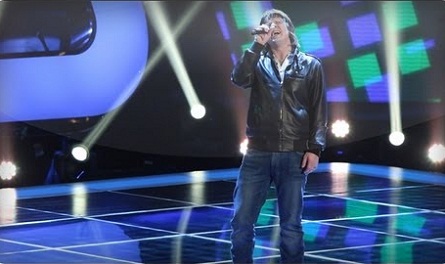 Terry talked about having the coaches turn their chairs around for him at the last minute. “I go for the last note on the song. And I’m holding-out on the note and I look up and no chairs have turned. Oh no, that’s it, free flight home. I finished the note and when I looked down, three chairs had turned around.” He said he chose Blake because after observing him last season on the show he could see that Blake is “very supportive. There’s a very encouraging atmosphere when he’s working with his artists. Plus my wife is an enormous country music fan.” Terry auditioned with “The Who” song Teenage Wasteland because “The Who – they were the paradigm for me. They really inspired me throughout my youth.” On strategy while being on the show and getting the audience hooked, he said, “I think that the trick is that the audience wants the person on the stage to remain authentic without tricks. Keeping the soul in it. It has to have the heart. That’s what transcends rock.” 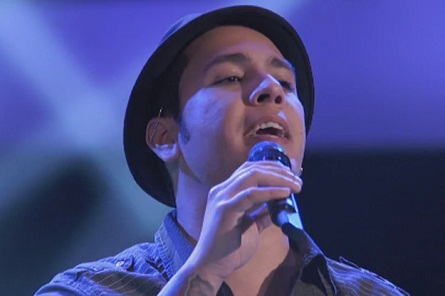 Bryan said that working with other vocalists on “The Voice” so far, their experience has been, “We started to realized that this is us leaving our mark. This is us going out there every time and it could be our last shot.” Watching himself on television he said was like a dream coming true. “Watching it with my family made me feel like I’ve reached my goal.” During his audition he said about the coaches, “I needed them to turned around for me so badly. I felt that they were going to want to know where my voice was coming from. So, they had to turn around for me. I went in wanting Adam the whole time. But, I almost picked Christina because she talked about sticking up for me until the bitter end.” Bryan said he ultimately still chose Adam, he said because “he pushed me to prove myself and he waited until the end. I like that. That he didn’t push his button right away. It made me want to be with him more. He describes his style as a mix between the Latin Jazz Soul that his dad does and his brother’s early metal head rock days.” 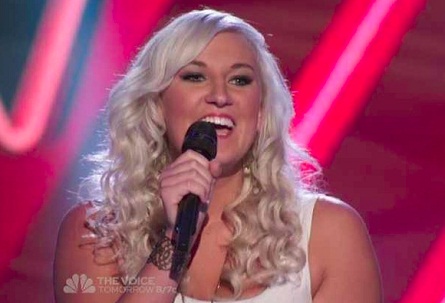 Gracia Harrison who is on Team Blake said that her strategy moving forward in the competition is “definitely to keep the same kind of twangy country sound that you don’t really hear on the radio anymore. I think Country has become merged with the country in a pop sound or Rock. To set myself apart I need to just keep it country”. 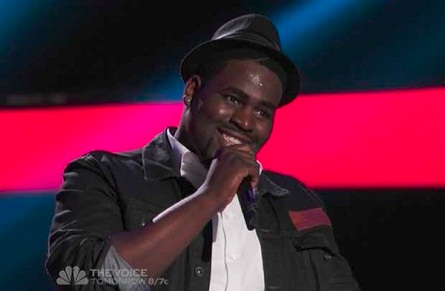 Trevin said “When I was growing up I wasn’t the most vocal type of person. I was that type of person that would always be in the background. I was always picked on growing-up.” Trevin chose Cee Lo because, “With Cee Lo I hope people can see that I have another side to me. With Cee Lo I might have a chance at doing some Pop or even Country. I’m also a songwriter. If we were to come together and make something, it would be something epic. Christina turned around for me first. It was crazy. I listened to my heart and mind. It told me to go with Cee Lo.” He thanks his eighth grade teacher who said he would never amount to anything because, “it took that for me to actually turn it into something positive. That’s why I passed the blind auditions. I thank her for that honestly. For pushing me.” 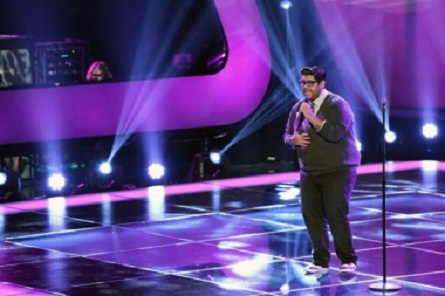 Daniel Rosa said he considered re-auditioning for “The Voice” when he got a phone call from the show. “That also helped with my confidence. I knew that I was ready to audition, and the show thought so too.” When the coaches turned their chairs, Rosa said he forgot what he was singing. “It was more like I’m on the show and I have the biggest pains in my stomach”. He said he chose Cee Lo because, “We’re both big guys and I thought that he would respect me as an artist. As soon as he turned his chair it just felt right. Although he says he thought he was going to choose Blake Shelton. Rosa says he “feels like completely a different person from last season” and says he thinks that will help him. “I know that I still need to work on my stage presence. I was terrified of holding that microphone so I didn’t last season. This time I did. This time being on stage that was the first time I held a microphone ever. That was very liberating.” When he didn’t make it on the show last season he said he had no time to be devastated. He says because he plays the Ukulele he tries to do songs that people normally wouldn’t expect. 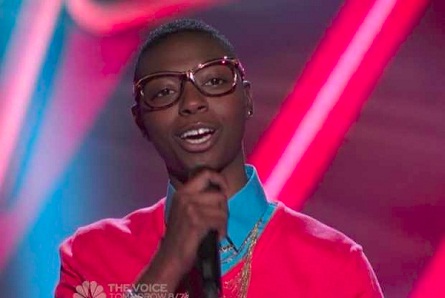 On Team Christina, De’Borah stated that she never mentioned the words that she’s gay until her Blind Audition on “The Voice”. “I never, ever mentioned those words before ‘I’m gay’. I never said that before. It didn’t even freak me out.” De’Borah said that her parents knew, “but I never actually uttered the words. It was more of an assumption.” De’Borah said about being picked by Christina, “When I saw her, I died inside. I love all of her songs, but the one song that I love the most, got me right here. I’m so amazed that I can’t even talk. I love her.” 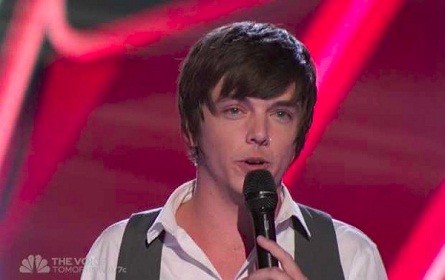 Joe said he chose “The Voice” because he was given an invite to audition. “The show was more unique than any of the other shows I’ve seen” because it stays true to artists and didn’t make them seem different than what they really are. They were attracted to me because I was in a band and I was trying to leave that band. They didn’t try to make me who they thought I could be.” He also said that he likes that “The Voice” promotes the uniqueness of every artist rather than trying to hide it. He chose Team Adam because Adam also “used to not be a front man and I enjoy that thought of him trying to help me do that – be a front man. He comes from the same music background that I do. He’s the one that can teach me the most.” Having past experience already being in the music business, he said that “the industry is extremely cut-throat. We were given everything but when it went down they were like, who are you again? Literally went from love to nothing. Being told “no” is the best thing that could happen for my career because it straightens you up and makes you figure out what you need to do.” 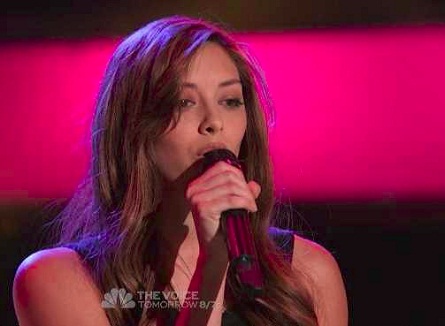 Devyn saids that being shy growing-up was a hurdle that she had to over-come which parlayed into a successful Blind Audition on “The Voice”. She said that she didn’t really come out of her shell until Junior High and High School and started getting on stage. “I’ve recorded in some studios and attended GMA week in Nashville one year as a Christian Artist.” She also credited putting videos on YouTube as helping her. She is inspired by Christina Aguilera which is why she chose her team. “She’s a very strong woman and stand up for what she believes in. She’s strong vocalist. She’s a very admirable celebrity because she keeps her personal life personal. I’ve looked up to her since I was a little kid.
Devyn said she chose to sing Ain’t No Other Man by Christina for her audition song because she knew that “she would either love me or hate me. But I was willing to take the risk in case she loved me. And, that’s my favorite song off of her album.”

Watch their audition videos here: The Voice Round One Blind Auditions