Take on the World! THE VOICE Season 7 Winner Finale Recap 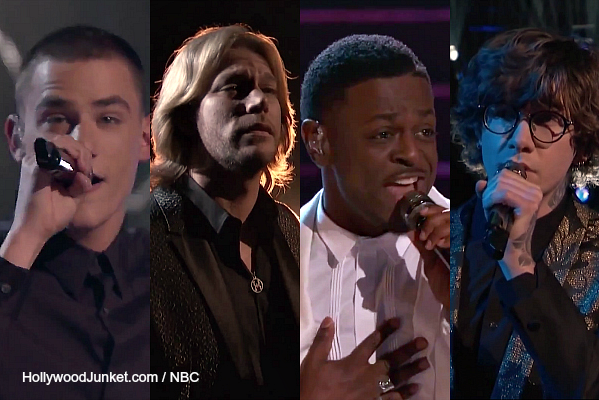 Night one of “The Voice” season 7 finale kicked-off with comments from new coaches Gwen Stefani, and Pharrell, and veteran coaches Adam Levine, and Bake Shelton talking about the remaining artists. The Top 3 this season was turned-into the Top 4 when a first-ever “Wildcard” was selected by fans to return to the competition out of the Top 12 contestants. Voters voted for Team Adam’s Damien.

The only two teams left standing on “The Voice” are Team Adam with Matt McAndrew, Chris Jamison, and Damien; and Team Blake with Craig Wayne Boyd. Coaches Gwen Stefani was left out of the competition when Taylor John Williams was eliminated last week, and Pharrell lost his last horse in the competition when Danica Shirey was voted out.

Gwen who was the former coach to Craig Wayne Boyd said she will take partial credit if Craig wins. Adam said about his Wildcard contestant, Damien, who returned, “is rare.”

Tonight’s contestants’ performances will include three separate songs. One that they each will pick, one song that their coaches will select, then one that will be an original song by them which they will work-on with their coaches. The first one up was the Wildcard – Damien!

Wildcard Damien sang “A Song For You”. Pharrell reacted, “Some one sings a song and lifts the entire room. We need more of that.” Gwen said it felt like Damien’s record. Coach Adam reacted “this was one of your best!”

Next, Damien sang “Don’t Let the Sun Go Down on Me” by Elton John with Adam Levine.

For his last song, Damien sang his original song “Soldier”. All of the coaches were on their feet after his performance. Coach Adam said Damien is thriving and this makes him the most happy that a coach could possibly be.

Blake gave Craig Wayne Boyd a difficult song “My Baby’s Got a Smile on Her Face”. Blake told him – It’s fun, its sexy. “The reason I haven’t recorded it, is because it’s so hard to sing,” said Blake.

Pharrell told Craig, after his performance, “Welcome to your future.” Gwen said she hopes he has a good nanny because he will be on the road a lot. Blake said “I haven’t been that nervous about a song on a show in never.” He said the song is meant for Craig and has been “carrying it around for years knowing something special would happen with it.”

The last song Craig performed was “In Pictures” by Alabama. Gwen said it was “really emotional” and “what a song to sing”. She called him “magic” and thought it was a weird thing to push her button for him, but glad she did. Blake said “It’s a great song and a perfect statement for where he’s at in his life”. He said that’s what Country music is all about.

Blake said it’s been really cool to discover Craig Wayne Boyd with the rest of America on The Voice.

Chris and Coach Adam sang “Lost Without You” together.

After that, Chris sang his original song “Velvet”. Adam said he hears Michael Jackson in it. Adam said he “loves it”. It’s R&B and soul music – Adam told Chris to “take risks”. Host, Carson Daly reminded viewers that Chris is 20 years old and was delivering mail at his University before “The Voice”.

Pharrell reacted to Chris’ performance with “a star was born on this TV program this evening”. He also said when Chris sang a Marvin Gaye song, everything changed!

Chris’ next song was “Cry Me a River” by Justin Timberlake. Coach Adam reflected on how Chris was shy when he first came onto the show. But, Adam worked with him on that. Chris did a great job at singing this song, almost better than Justin Timberlake! After his performance, coach Adam called him his “young Jedi” and “welcome and congratulations!”

Matt performed an original song first up. His new original single is called “Wasted Love.” Adam was very proud as he gave Matt a standing ovation while smiling and clapping after Matt’s performance. Pharrell sat with a defeated look on his face. Then Pharrell told Matt, who is a music teacher, “we couldn’t ask for a better teacher to teach these kids.” Gwen told Matt that it was a great song and “really inspiring.” Adam said they worked 24/7 on this original song. He said it just wasn’t Matt’s own song, but “one of the best song’s I’ve ever heard in my whole life!”

Matt and Adam sang “Lost Stars” from the movie “Begin Again” together.

Gwen said it’s such a perfect song for right now and that he’s “pure”. Pharrell said “at the end of the day it’s just magical for you continuing to walk through the wall and you’re just a great voice.” Coach Adam said, he felt that there’s so much chaos in the world, but “the whole universe just paused to hear something so pure and bittersweet, and so perfect.”

Pharrell was congratulated for getting six Grammy nominations. Winner of season 4, Danielle Bradbury, joined host Carson Daly and showed-off her new tattoo that reads “God is greater than your highs and lows.”