A new pilot game show was shot today for NBC called “Who’s Bluffing Who?” A slew of game shows in the same theme will be airing on competing networks. “Trust Me I’m a Game Show Host”, for ABC and GSN’s “Late Night Liars”.

This version of who is lying and who is telling the truth is hosted by actor and comedian D.L. Hughley. 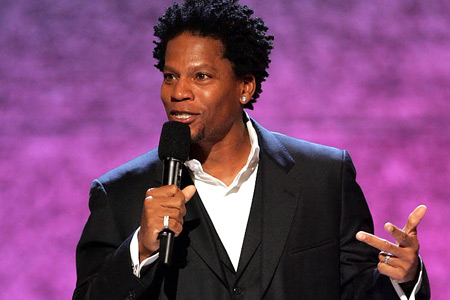 How the game is played:
A total of seven contestants compete in the first round to claim a “money chest” that can contain any one of the following amounts: $50,000, 75,000, 100,000, 125,000, 150,000, or 250,000. In order to gain a chest, contestants must answer a question from different categories. Another contestant can challenge them if they disagree with their answer by stating “you’re full of it!” while buzzing-in. The first six contestants to score two points each, move-on to the next round.

During the second round, contestants take a look at the money amount that is in their chests. They must tell each other what the amount is. However, it is up to the other players’ discursion if they are telling each other the truth or not. The third round is played-out in “Family Feud” style. Two contestants at a time face-off against each other as they see who can answer trivia questions first. The first person to buzz-in may answer correctly or not, while their opponent must guess if they are “bluffing” or not. If neither contestant knows the answer, the question is skipped and a new one is asked. After this round, three players are left who either kept their own chest or traded it in for their opponents’.

The last three players compete against each other as they must answer a rapid-fire of trivia. The one buzzing-in to oppose the answer may score an extra point if they know what the correct answer is. The contestant with the most points, wins the round and moves on to round four.

The remaining contestant is presented with multiple choice answers to five questions. He or she must weed-out the “bluff” choice in each one. They win $50,000 each time they get one right. The money earned in this round is added-on to the amount in the chest that they kept. The maximum amount of money a contestant may win is $500,000.

The Host:
Some actors just don’t make great game show hosts. Although I’m sure he was wonderfully entertaining as a correspondent on “The Jay Leno Show”, Hughley failed to connect with his audience and relied way too heavily on what was scripted which in turn made for too many retakes and delays. When are game show producers ever going to learn to stop hiring actors as game show hosts?

“Who’s Bluffing Who” has an interesting spin on pitting contestants against each other for the largest possible bank amounts containing poker elements with a little bit of “Deal or No Deal” added-in. On that note, two game show models couldn’t hurt to be added to handle the bank chests as well as possibly loosen-up the show host.