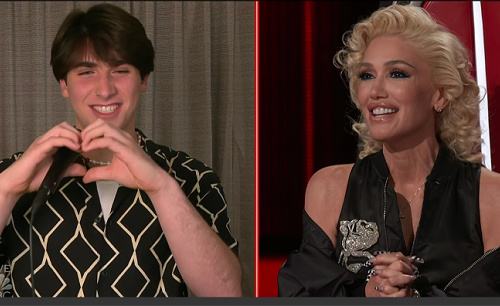 In last week’s “The Voice,” artists were presented the task of belting-out songs that had profound meaning to them and changed their lives in some way.  This week, the Top 10 artists got some much needed fan love expressed to them from not only their hometowns, but basically all over the world.  Their fans picked the songs that they performed in their Top 10 performances on Monday night.   In addition, each artists’ Top 10 performances were introduced by a group of fans.  Most shocking was when Country singer Bryce Leatherwood got an introduction from fans in New York, and Kique got a loving opening from fans in New Zealand!  Kique, who wasn’t feeling well due to Covid, wasn’t on site and his pre-taped performance was aired

Tuesday’s “The Voice” results show will leave fans with the Top 8 this season.  Those Top 8 will move on to the Semi-Finals next week.  Coach Blake Shelton was over the moon that this week, all four members of his Team were in the Top 10!  Kique did partake in the post press interviews.  Readers can visit us on YouTube to watch.

Parijita opened the show giving an incredible performance of “Scars to Your Beautiful” by Alessia Cara. 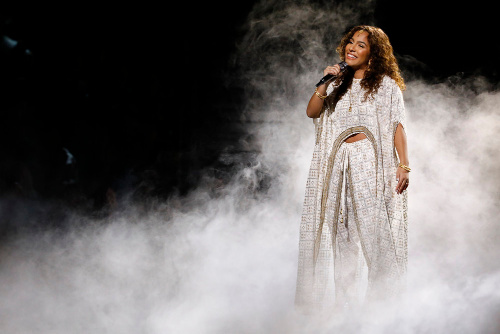 Blake said he Saved Rowan and now people are big fans of hers.  The fans want to hear her do a newer song.  “I Love You” by Billie Eilish.  Blake said it’s a good song for her since it strips away the band and we really get to hear her tone. Blake said what’s beautiful is that they hear all the tiny runs. He thinks that she’ll expand her fanbase after this song.

Camila loved her tone, but she thought it was a challenging song.  Gwen reacted that the tone of her voice is so beautiful and so natural with her dynamics.  “That’s something that’s so rare” and to be doing that on Live television. “That’s gorgeous.” John agreed that “it was a bit of a challenge” since you hear every single breath she took.  He thinks she nailed it.

Blake said “We knew it was a challenge but I think you met the challenge.” He said they heard things from her that they haven’t heard yet.
One fan party was in Nashville with last season’s Wendy Moten who was a finalist and the runner-up last season. She said they will be living that moment. It changed her life and is one of the greatest things she’s ever done.” Wendy said she’ll be looking out for Justin Aaron.

Justin said from just one performance, he got 1,000 people following him.  He said when he came back to school where he teaches, there were posters everywhere for him.  Gwen picked a fan choice song for Justin, “Just Once” by James Ingram.  Justin said he’s glad that he was able to open his heart because now he has an amazing wife.

Gwen said Justin will go to the next level with this song and right to the Semi-Finals.
After Aaron’s Top 10 performance, John Legend said his mom made it clear that she only voted for Team Legend AND Justin!  He said his mom and family love him.   He added that America loves him because he keeps giving beautiful performances.  Camila said he’s a masterful singer.  Her ear is so happy and never gets tired of hearing him.  Gwen said she was so excited when she saw that the fans chose that for him.  It was beautiful how he made the changes. Gwen said her mom and  family are also fans of Justin’s! 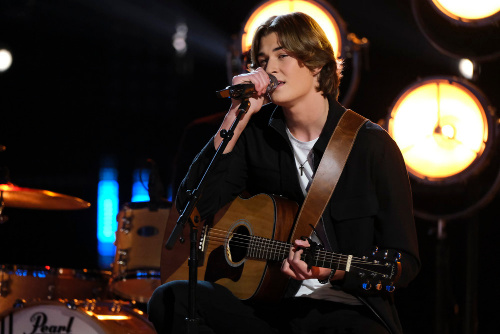 Blake said people are talking about Brayden on social media and Blake showed Brayden a video of Brayden’s football Team who sent a video message to him.  Brayden’s song was  “Home Sick” by Kane Brown. He called it the perfect song because he’s definitely missing his friends and family.   Blake said Brayden has a lot of potential to not only make it in Country but to also cross-over.

Camila said “that was absolutely delightful” and he just “gilded right over that.” She called it her favorite performance of his. Gwen said she could picture him doing a song like that outside the show and being number one.  Blake said watching him develop vocally and artistically.  As he gets more confidence, he’ll get so big that he won’t want to come back to “The Voice.”  Blake told him to combine his performance with that “it thing” that he has and he’ll be huge.

Kim got the fan chosen song “Love on the Brain” by Rihanna.  John asked her about her fans all over the world.   She said “it lights a fire” under her.  When she went home, she visited her high school.  John said she’s coming back to a classic R&B song.  Kim said the song is one of her best friend’s favorite karaoke songs to sing.   John predicted it will be her best performance yet and America will love it.

Carson Daly called it an electrifying performance.  The coaches gave her a standing ovation. Daly said he was confident that Rihanna loved that performance.   Blake said Kim can “kill things and then bring them back to life.” He said congratulations on being born that way!  Gwen said she could see that Kim was satisfied that she finally got to show the world what she wanted to show.  John said this was the exact perfect match for her ability and maximized everything that she does so well.  John told her, “You KILLED it Kim.”

Bryce said his grandfather is his biggest fan and is “stoked” that Bryce is in the Top 10.  Sand in my boots.”  He said he can relate to the meaning of this song. He has a video of him playing it.  Blake said Bryce has done a lot of classic Country songs.  This song is new and the fans know what lane Bryce is in.  Blake said he’s seen the biggest growth in Bryce, and he’s taken it to the next level.  He thinks this performance will take Bryce to the Semi Finals.  Bryce got a fan shoutout from fans in New York!

Camila said Bryce’s tone of voice is like “salted butter” and he’s like a pro up there and she just wants to “eat it up.”  John said he delivers the song with confidence and smoothness.  “I think it’s a great song and you performed it beautifully”  He thinks America will love it. Blake said it will be fun to look back at how this season began. He thinks Bryce is ascending.  Blake said his hometown in Oklahoma only cares about Bryce now and not him!

Kique was Instantly Saved last week.  So, Kique obviously has fans. He said having fans that are his grandma and grandpa is really cool. He said when he went back to work, people asked him if he’s on “The Voice.”   Kique got the song “Call Out My Name” by The Weeknd.   Gwen said Kique is like a real creative genius.  Kique said he’s singing for his life and the song has that desperation. He wants people to call out his name and vote.  Kique didn’t perform live, and a pre-taped performance was aired.

He got a fan shoutout from New Zealand.  Gwen gave Kique a standing ovation.  John said Kique gives his personality and flare. “Youre so daring.. you’re making them so specific to you and it’s working every time.”  Gwen reacted that she’s so proud to be his coach.  She called it a flawless performance. 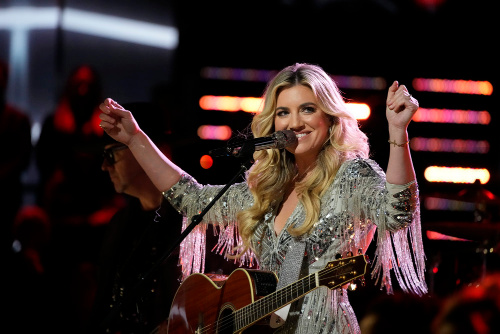 The fan viewing party in Miami, Florida had past ‘Voice contestant Jeremy Rosado.  He’s rooting for Morgan Myles who’s his friend.   Her fans are called “The Mylestone.”  Morgan said given that they’re always going to reach new levels.  “Myles across America” was multiple fan viewing parties.
Morgan got the song “Tennessee Whiskey” by Chris Stapleton. She said Chris Stapleton  represents the kind of artist that she wants to be.  Camila said she’s never seen Morgan so in her element since this song.  Camila said this is for the “Mylestone!”

Daly compared Morgan’s Top 10 performance to a CMA performance.   John agreed and said it really did feel like an awards show performance.  He said he likes seeing her fully in her element today.   Blake said he got territorial with Camila because she was doing Country again.  He gave Morgan a standing ovation.  Camila said her eyes hurt over how much she is absolutely shining and she’s “superstar” status.  Every time she gets better and better.  Camila said “we need her.”

Bodie said someone made cookies of him.  Blake said where he’s from in middle America LOVE Bodie there.  He likes having fans with alopecia.  His fans shared their stories with alopecia.  Bodie said.  The fan song he got was  “Golden Hour” by JVKE.  He said the fans nailed it with this song choice because it’s right in his wheelhouse.  Blake reacted “It’s Good!  It’s GOOD!”  He thinks Bodie could be on the Top 40. The thing that amazes him is Bodie’s range.

Bodie’s fan shout-out came from Ladera Ranch, CA.   The coaches were standing up for Bodie’s unbelievable performance.  Daly said it’s the VMAs.  Camila said Bodie walked in and she felt like “starstruck” by him. He’s such an artist and everything about him…it’s different from anyone else there. Gwen said he definitely has his own lane and it was beautiful..his tone of voice.  She said “you’re so talented. I love you.” Blake reacted  ‘this may be the hardest song I have ever heard anyone try to do on this show.’  Then he thought “this may be the greatest performance I have ever seen on the show.”   Blake was blown away, “who are you?  You’re incredible dude!” 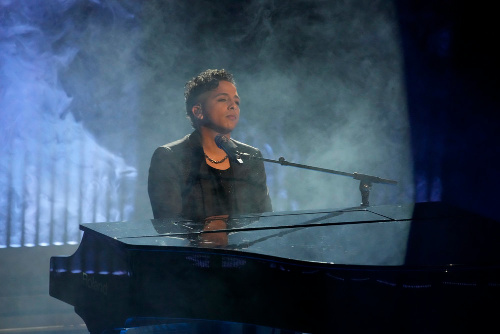 Omar said he hasn’t had a true fanbase until now.  He said before it was fans of a show or project he was working on.  John said when he went through the TSA at the airport and he was recognized, that’s when he knew he was famous.  Omar has been enjoying all of the fan art he’s been receiving.  He said “it’s almost like it’s not real

The fan song for Omar was “I Want to Know What Love Is.”  John said people have been impressed with him as an amazing and impressive vocalist.  Omar said the fans are challenging him with this song.  He didn’t expect to be on “The Voice” at this age and it’s given him so much strength.
Omar’s brother E.J. and family and friends in Orlando, Florida introduced his Top 10 performance.  After Omar’s spectacular performance, Camila was laughing, “Omar honey…you are not going home.”  She said only Omar can pull off that song and have it not sound like Karaoke. You are no baby dragon.  “You are a full grown fire breathing dragon.”  Gwen said they were so excited to hear him do that song. How he glides up on those notes, they don’t know how he does it. She called it more emotional than last week and it was so passionate.

John said he’s gone from an emotional singer to someone who’s connecting to people’s hearts. It is so powerful and he’s so special.  Omar is the reason why “The Voice” exists, John finished.

The Top 8 artists were revealed on Tuesday’s Results show!