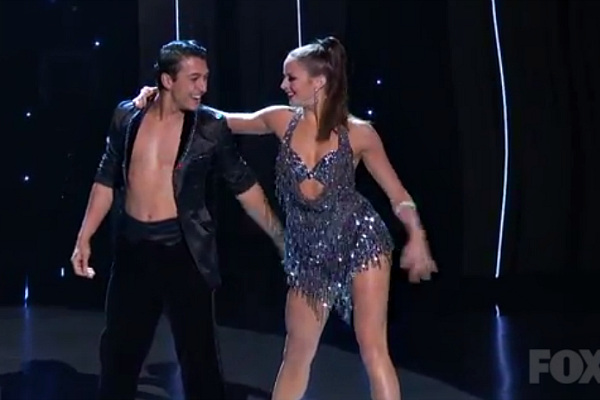 This week on FOX’s compeition dance show “So You Think You Can Dance” wrapped-up the Academy where the ten All-Stars had to make their selects from their Top two dancers, to their one and only dancer to take to the live shows begining in the same episode.

Viewers saw pre-recorded footage of the All-Stars making their decisions betwen their final two. Then their choices were revealed on the live show when their dancers came out onto the stage, followed by a live performance with their All-Star. First-up was All-Star Fik-Shun.

All-Star Fik-Shun’s final two were Kyle and Dassy. “They both brought it and it’s making this tough for me”, said Fik-Shun of his top two dancers. The live show revealed that Fik-Shun chose Dassy. They danced hip-hop, wearing snazzy Zoot Suits to a Popin’ Pete choreographed routine. Judges Comments: Mary Murphy reacted “Fik-Shun you have finally found your match.” She added, “the chemistry is unreal.” Nigel thought Dassy “made the show stronger.” Vanessa stated that the two were “dynamic!”

Allison had Zachery and Logan as her final two. Zach recounted how he made it to the Green Mile on SYTYCD season 12, then was cut. Allison said Logan, at 18-years-old, is a “crazy, insane mover,” and will need more training. Logan was revealed as Allison’s choice. Unfortunately, due to a shoulder injury, Allison didn’t join Logan this week in his first live performance. Instead, past SYTYCD season 9 contestant Audrey Case performed with a contemporary Tyce Diorio number with Logan.

Judges Comments: Nigel pointed-out that Diorio taught the routine to Audrey earlier that day in a few hours. He said Logan is a great choice. On a side note – as for Allision’s other dancer, Zachery, Nigel announced has taken-over for Rudy Abreu in “Cats” show. Vanessa called the performance “so beautiful”. Mary said it’s a “blessing” to see Audrey back on the show and told Logan that he deserves to be there. 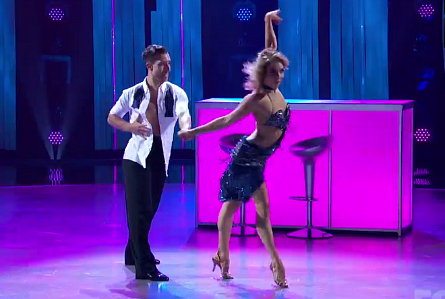 In last week’s episode, Jenna had to choreograph two different routines for her final two Kiki and Konkrete. It was also revealed last week that Kiki is a world-renowned ballroom dancer who didn’t originally try-out to be on SYTYCD, but was pulled in while partnering with Magda whom was auditioning. Kiki was Jenna’s choice. They performed Latin Ballroom choreographed by Dmitry Chaplin.

Judges Comments: Mary called Jenna “Latin hotness” and “so grounded.” She said Kiki went under her radar but blew her away. She’s been waiting for a “Kiki” on ths show! Nigel said it was wise for Jenna to do two choreographys. But, wants to see more from Kiki because he couldn’t take his eyes off Jenna. Vanessa agreed with Nigel and that it was hard to not notice Jenna who “is sho hot, it’s insane.”

Havoc is an animation dancer like Cyrus, while his other dancer, Kaylee, is contemporary. Kaylee stated that she always wants the “hardest challenge” in everything which is why she chose Cyrus as her All-Star. “I know he’d bring that out in me” she said. Cyrus surprised most viewers by choosing Kaylee. They performed a contemporary number by choreographer Tessandra Chavez. Cyrus recieved some back-lash from the judges for his choice.

Judges Comments: Mary stated she would have liked to seen Cyrus stronger in the performance and Kaylee is a fascinating person to watch. Nigel told Cyrus whether choosing a contemporary dancer over an animation dancer will work, only time will tell. He added that the audience will let Cyrus know if it was a smart choice. Nigel also advised Kaylee to “raise her game,” and wished her luck. Vanessa said because it was contempoarary, she wanted to see more “weightlessness” in the moves. 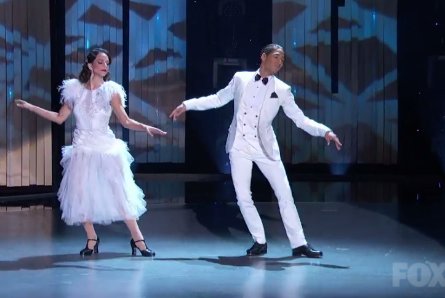 Gaby’s last two dancers were Lex and Evan. Gaby described Lex as a contempoarary dancer who can tap, and Evan as a tap dancer that can do every style of dance. When making her decision, Gaby stated, “the person that I feel I can offer the most to. The person I feel needs me more…” She chose Lex. Gaby and Lex performed a tap routine by Anthony Morigerato. Judges Comments: Nigel said it was similar to Fred Astaire. “Lex, you are a great all around dancer. He predicted that everyone will pick on Lex for his personality, but he’s one of the best dancers Nigel has seen. Vanessa said she totally saw his personality. Mary stated “Lex, we’re just going to call you ‘Mr. Personality!'” She also mentioned a past winner whom was also critized for lacking in personality. 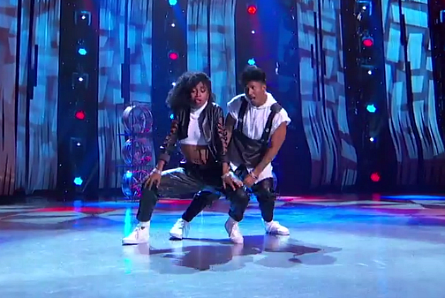 Comfort had to choose between Mark and Deja. She contemplated, “do I want the powerhouse of two women” or does she want to show off what she can do with a male partner. Comfort said she felt in her heart who she wanted to take to the live shows. That dancer was Mark. They performed a hip-hop routine choreographed by Luther Brown. Judges Comments: Vanessa told them “you guys are on fire! Comfort is so fierce!” She noted that it’s apparent that Mark loves the camera and he’s amazing. Mary said “the chemistry is out of this world…you just lit it up out there on the floor!” Nigel said Comfort still dances “brillantly”, and loves her choice for a partner – Bruno Mars’ little brother, Nigel joked.

All-Star Marko Germar’s final two were Koine and Sofia. He said he had a connection with both women. Marko said “I believe in following my gut instinct.” He chose Koine “KoKo”. They danced a contempoarary number by Stacey Tookey. 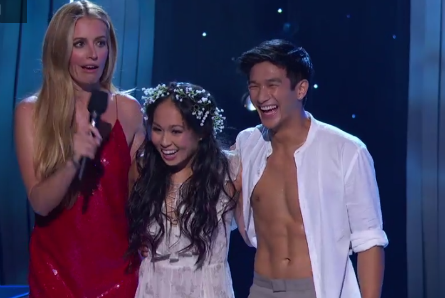 Judges Comments: Mary said it was so amazing. Nigel said “it was effortless, it flowed.” He told Marko it was a “brilliant” choice in a partner and they suit each other. He teased Marko “tell us when you name the day!” referring to their wedding because of how they were dressed. Vanessa regined it back into their performance and said there was “something about it that was so pure.”

Paul’s final two were Sydney and Kristina. Paul noted the weaknesses of both dancers. For Sydney, she needed to show more of her personality, and Kristina lacked being able to adapt. Paul chose Sydney. Their live performance was a ballroom dance choreographed by Val Chmerkovskly from “Dancing with the Stars.”

Judges Comments: Nigel reacted that they “just showed real talent together.” However, before tonight’s performance, Nigel confessed that Sydney was slightly under his radar. But, he’ll never forget her now. Vanessa wanted to see “more pizzazz” from Sydney. Mary stated that the performance was “fun, fast and furious!” 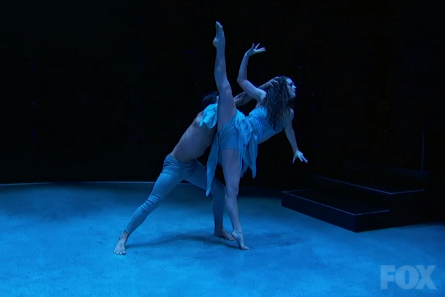 Robert’s two dancers were Taylor and Jonathan. He said Taylor’s lines are stunning and how she understands her body is stunning. After dancing with both dancers, Robert said he felt “affected.” But, he said just a little bit more by one than the other. He chose Taylor. Their live performance was a contempoary piece choreographed by Travis Wall that blew the audience away and had everyone of their feet. Host Cat Deeley even had to react to an impressive “dive” that Taylor did in the beginning of the routine.

Judges Comments: Vanessa stated “Travis Wall, that was INSANE!” and told Taylor that “this moment does change everything for you. You took our breaths away!” Mary gave the highest compliment that she’ll remember that number ten years from now. She put them up in her all-time Top 10. “That’s pretty amazing Taylor.” Nigel said “Travis Wall just showed us why he’s an Emmy nominated choreographer. Before that performance, Nigel said he didn’t remember Taylor either but blamed it on his age.

Jasmine had to chose between Robert and Howard. Howard had auditioned for SYTYCD before in season 12 and was cut in the first round. This is impressive for Robert who’s been dancing for only three years. Jasmine chose Robert Green, who she said isn’t the most technical dancer. They performed a hip-hop routine choreographed by Chris Scott. Judges Comments: Mary told Jasmine that she “looked wicked. You danced wicked (in a good way).” She added that she loved Robert’s sass, swag and personality. Vanessa told Robert that she loved him from the moment he came to audition.

“So You Think You Can Dance” air Mondays at 8/7 c on FOX network.