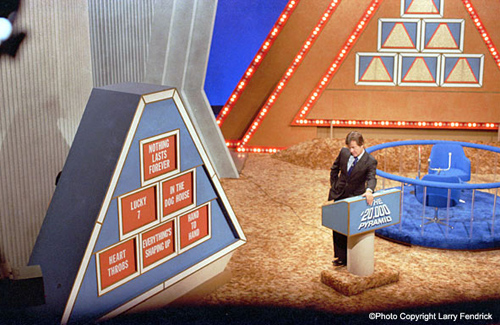 HOLLYWOOD JUNKET recently reported on GSN’s updated version of “Pyramid” game show. We have another report from a member of the audience that spent the whole day on the set observing. Their exclusive report follows below:

Behind the scenes and in the audience at a recent shooting of GSN’s Pyramid game show, one thing was obvious; they were staying true to the legacy of the original show. The set of Pyramid, while not a perfect recreation, was indicative of the whole experience of the new show. It stayed true to the curves and soft angles of the original Pyramid, while bringing a modern upbeat tone and modern upbeat questions.

The host, Mike Richards was amicable and playful with the guests and celebrity guests; he even said off stage that he was attempting to pay homage to Dick Clark with a funny, casual demeanor. Speaking of the celebrities, just like the original show made the experience more than a simple game show. Over three episodes we were able to catch, we saw Iron Chef Cat Cora, Community star Yvette Nicole Brown, Grey’s Anatomy staple Chandra Wilson and funnyman and Saturday Night Live veteran Horatio Sanz.

The Game play is simple enough and similar to the 1982 version. There are two contestants and two celebrities per episode, who are paired with the contestants. There are two rounds and two “Winner’s Circle” bonus rounds. Each contestant and celebrity pairing takes turns choosing one of the six categories broadcast on the smaller pyramid near the host and host’s podium. Then the contestant or celebrity offer clues regarding seven individual topics given on a hidden monitor. In this round, the person offering clues is only restricted by using the exact word or a word from the topic.

Each team goes back and forth, collecting one point per successful guess withing the 60 second time limit. The team that has the most points at the end of this round moves onto the “Winner’s Circle” bonus round. Additionally, if either team completes all seven items in the 60 seconds, the contestant is given an immediate $500 spending cash prize, and $5000 is added to the total possible prize in the “Winner’s Circle”. Tie-breakers in the event of one are settled by each team getting 30 seconds to get seven points with items that start with a specific letter. Further ties here are settled by whoever got their points the fastest. On set, during the first tiebreaker of the three shows filmed, Standards and Practices came out to make this official during a long break.

In the “Winner’s Circle” the celebrity and contestant first choose who will go first, and then play a similar round to the basic play. This round with separate topics for each item on the big pyramid behind the player answering. If the team answers all 7 questions, the contestant wins the bonus prize, from $15000 to $25000. If a contestant swept the whole game they would walk with an impressive $56,000. During the three episodes we saw taped only one player won the “Winner’s Circle”. Celebrity partner Yvette Nicole Brown told the audience after the fact that she felt like she won the money herself!