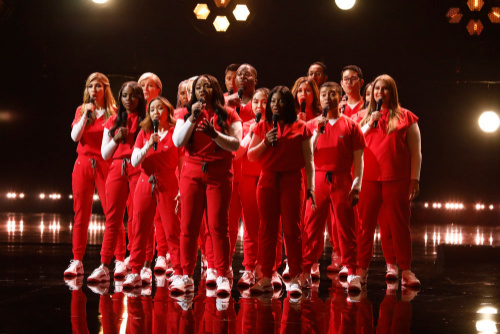 The acts performing on “America’s Got Talent” season 16 finals ALL stepped-up their games and showed viewers and judges that they deserve to win that $1 million dollar prize and Las Vegas show.

After watching each and every act just kill it on Tuesday’s Finals performance show, judge and executive producer Simon Cowell said “this is a night that I will never forget.”  Each singing act belted-out their best.  These included show opener, Jimmie Herrod, opera singer Victory Brinker, Brooke Simpson, and group Northwell Health Nurse Choir who closed-out the night.

All of the Golden Buzzer acts made it to the Finals, except for Simon’s act, Nightbirde visited them virtually on the first live show to explain that she had to pull out of the competition early due to her cancer treatments.

Host Terry Crews reminded viewers that this was it for the remaining ten acts.  Their fate solely relies on America’s votes because there were no Judge’s choice vote, and no Instant Save vote on Wednesday’s two-hour finale show which starts one hour later at 9/8 central.

At the start of Tuesday’s Live Show,  Simon stated “this night can literally save your life.  If you turn it up a notch tonight, you could be the one on the poster (in Las Vegas show).” The acts certainly did who each gave perfect performances. 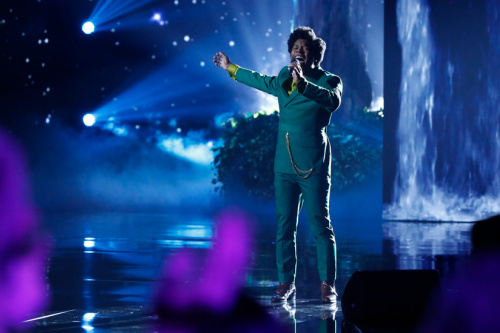 First up was Sofia Vergara’s Golden Buzzer, singer Jimmie Herrod.  Jimmie said his experience on AGT has given him more confidence.  He’s gotten a lot of positive feedback.  When he was in the bottom three, “I felt the full roller coaster of emotions.”  He thought “maybe this isn’t what I should be doing.”  He said knowing that the whole experience almost came to an end, lit a fire under him.  “Obviously I want to win.”  Jimmie sang “What a Wonderful World” for his Finals performance.

Sofia reacted that Jimmie is “a man of the stage” and “brought this song and again made it your style.”   Howie said there are no words to describe Jimmie’s voice.  He can take a classic and make it so pure.  Just with his voice he has made it a wonderful world. Heidi said Jimmie is a class act and he’s deserving of the million dollars.

Simon said it was good that Jimmie was in the bottom the last time because “we’ve been missing something” from Jimmie which he got back.  Simon called the long note that Jimmie carried at the end of his Finals performance “diva-like.”   Crews asked Jimmie what does it mean for him being in the Finals.  Jimmie answered that making it to the AGT Finals means the world to him. 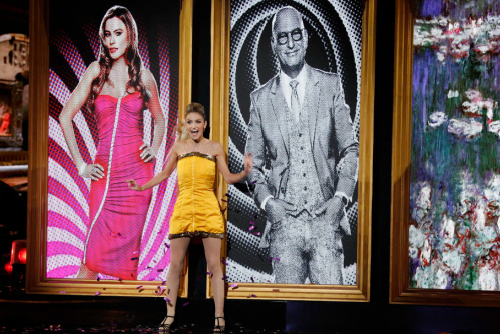 Lea Kyle, who’s boyfriend is a past AGT magician contestant, was Heidi’s Golden Buzzer.  Heidi said she had “the best time” meeting everyone and sad that “it’s almost over.”  AGT has never had a quick change artist win But this year, quick change artist Lea Kyle is in the Finals.   Lea Kyle got a standing ovation.  Heidi said Lea “is the best” and called her amazing.  Her act is better to see it live, she added.  Sofia agreed and called it Lea’s best performance.  She said today Lea came with a story. Simon said the only criticism was that it was “too quick” and was “a step up” they’ve had so far.  He genuinely believes she is the best in the world. Howie told Lea that it’s her best yet.

Simon reacted “oh my God. ..tonight you’re in a different league,” and better than her first audition.  He said she has a glow about her.  Simon said Victory is what they call “the X factor.”  After that, Simon said she could win the show.  Sofia agreed that she has a big chance to win the show and the song was perfect for her.  “You can definitely win this competition,” said Sofia.   Howie called her “so aspiring for humanity.”  At seven years old, she found her passion.    He said people out there need to watch her and find their passion.  He added that she’s a  star.  Heidi called Victory “perfection.”  Crews asked Victory if she knows how special she is.  She answered, “yes.”

Gina said her parents have had every job possible to raise her and her siblings.  Gina said she knows how hard they were working, and it stayed on her brain.  “I brought that work ethic to comedy.  I didn’t give up no matter how hard it got.” Gina said she could be the first comedian to win.  But, also the first Latina from the Bronx to win as well.

Howie told Gina that she looks great and she is great.   “You’re really funny.”  He brought up that one of the comedic greats,  Norm MacDonald passed away today.  She reminded everyone that there’s still joy in the world.   Heidi said there’s so much sadness in the world and it’s so nice to sit there and listen to her and laugh.  Sofia loves that Gina is so comfortable on stage and they love watching her.  Simon said being a comedian is the hardest thing to do and he adores her.  He asked Gina what winning means to her.  She said it means making history for Latinas, for comics, for moms and everyone who has a dream. 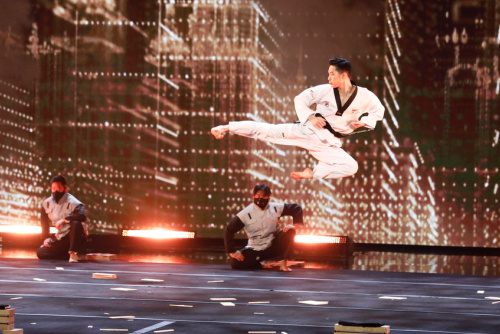 The leader of World Taekwondo, Long Nguyen,  said being on AGT has made their bond unbreakable.  His dad decided to sign-up him and his brother to taekwondo.  He thinks about him because he knows his dad is watching him.  He said their theme is “peace and family.”

They performed with 400 roses. Howie called it “the best act of the night.”  He said no matter how old, come see them live and Howie said he can watch a two-hour show of them.  Heidi said their act has “exciting written all over it…It’s insane what you do!”  Simon said “I was getting bored of you…then tonight that was bloody brilliant.”  And, “that is how to put on a show.”  Sofia asked how many of them can act because she wants to produce their movie.   Long said winning AGT certainly completes their mission and they’ve been training for it all their lives.

Aidan said since he was younger, he was “a little bit different…there was definitely a missing piece in my life.”  Aidan was first inspired by seeing Pink on YouTube doing aerial.  He taught himself how to do it with bed sheets.   His advice to others on AGT is to just keep working hard because “this experience is amazing.”

Aidan got a standing ovation from all the judges.  Simon decided to stand on top of the judge’s table in order to elevate his standing-O to Aidan.  Simon said Aidan is “unbelievably talented.  Your creativity is off the charts,” and he called it the best performance he’s ever seen.  Heidi said here Aidan is at the Finale. Simon is standing on his desk, the audience is going crazy.  Sofia said it’s been an amazing year from him practicing with his grandmother’s bed sheets to standing on the AGT stage.  Howie said personally he liked Aidan’s last performance better.  Howie got booed.  Aidan said it’s amazing, he started in a tree and now he’s here. 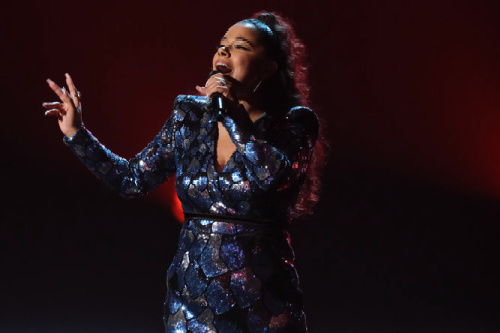 Before she performed, a pre-video was shown of Brooke receiving an immense amount of positive video responses to Brooke’s AGT act from other Native Americans.  It was very emotional for Brooke.

Sofia reacted that Brooke is the perfect example of someone coming to the Finals and raising their game.  She said “I know you want this so much.” Simon agreed with Sofia.  He said that’s why we love you because every time you come on this stage, you give it every ounce of yourself.  He said Brooke  has a real shot at winning. Howie said Brooke is “on fire.”  A drop the mic moment and a drop the mic stand too. Heidi said “I hope your career is as bright and as big as the notes that you hit.  I think you’re amazing.’

Crews asked Brooke, “who inspired you?”  She answered that her tribe and the next generation.  She told the young people watching that “nothing is impossible for you!” 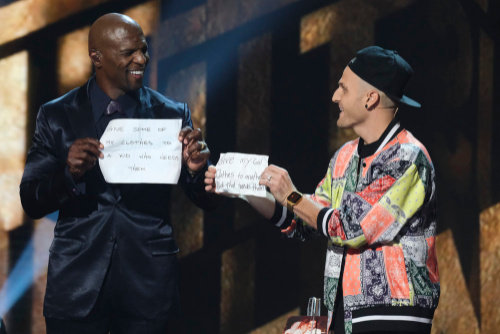 Dustin said growing up, he went through some dark times.  But at nine years old, magic helped him.  Dustin said he never thought he’d make magic his career.  He wants his sons to know to never stop chasing their dreams.  No matter how it goes, there’s always magic around the corner, Dustin said.

Dustin said it’s his parents 37th anniversary.  When he was young, his parents’ marriage actually fell apart.  But, someone stepped-into their lives to help get them sober and put the family back together.  He reminded the audience that they “are the magic.”  He had the audience crumble up paper balls and throw them at the judges.  There’s over two thousand people in the audience.  Dustin told the judges to each pick up one paper ball.  Dustin called Terry Crews to have him choose one of the judges’ paper balls.  It was Simon’s.  “Give my cool clothes to another kid that needs them,”  is what was written on the paper.

Then a balloon was popped which contained a paper ball that read the same message as the one Crews had chosen from Simon.  At the end of his performance, Dustin stressed the fact that the sentence began with “give” and made a ton of papers fall into the audience and judges with the word “give” printed on them!

Simon reacted that Dustin “is really an amazing story teller” and glad that America put him through.  He predicted that at the end tomorrow, Dustin will be one of the two acts left standing.

Sofia said Dustin has found his lane and it’s really intelligent of him.  Howie said, Dustin just gave himself a shot at winning this whole thing.  Howie added that Dustin makes the impossible possible.

Josh said he’s in the worst pain of his life.  But, he said he realizes that “you’re not going to get better by letting it beat you.”   He said on stage, he feels the love surrounding him and it’s worth the physical pain.  He wants his kids to know that he was able to accomplish great things and they can too.  He said seeing his face on a Las Vegas billboard would be a dream come true.

Josh joked about his overactive arm in his Finals routine.  Heidi recalled Simon asking Josh to be “more naughty” and he delivered when he suggested that Simon was getting Botox!  Josh said he’s “been hanging out!”

They are front-line workers from New York.  “Nurses don’t give up.  We are going to be here for you no matter what.”  They fulfilled  a dream that they didn’t know they were allowed to have, one of the nurses said.  They sang the song “Stand By You” for their Final performance.

Sofia said “what a treat.  What a way to close the show.”  She added that not only are they good, they are inspirational.  Heidi said no matter who walks away with the $1 million,  they will walk away with a million thank yous.   Simon said “this is a night that I will never forget.”  He said Northwell Choir  has been consistently incredible.
He pointed-out that it’s good that they chose a song so upbeat tonight.   “Because what could have been so depressing turned into something that reminded us of what you do for your day jobs.”   Howie  said “I’m going to stand by you and I’m going to say you probably will win the finale.”  He said they are the lifeblood of what  America is about.

They said they came to AGT with the magic of “stand by me” and they’re going to stand by them and are not going anywhere.