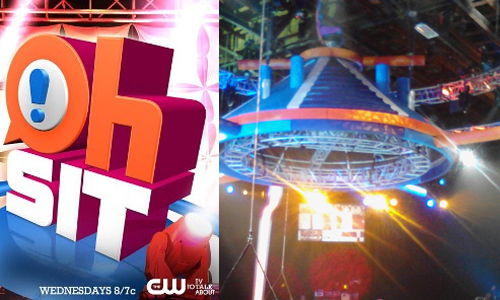 Our exclusive report from a HOLLYWOOD JUNKET reporter who sat-in during a few days of taping of the new action game show, “Oh Sit” now airing on the CW network. Here’s his account of some of the little known facts that viewers won’t see while watching the show on television! 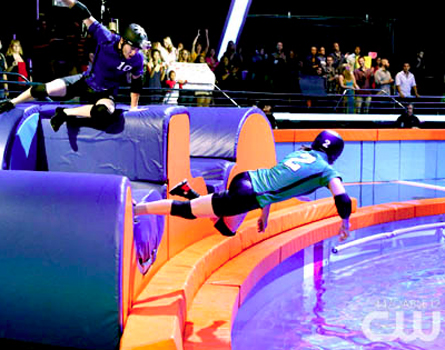 Somebody at CW network came up with an idea “A bunch of people run around an obstacle course with water hazards while music plays. The set reminded me of a smaller indoor version of ABC’s “Wipeout.”

We see why Jamie Kennedy calls it the “Sittiest”!

The game starts with twelve players, and winds down like “musical chairs” while a “live band” plays. The band usually lip synced , though in their defense, I think they lip sync to make the sound editing easier. Six young men and Six young women, who all seemed fit and trim and in their young 20’s, run around an obstacle course equipped with water hazard and padded obstacles to climb over or under. The players seem to have the option of checking each other like in roller derby, but only a few took advantage. It seemed like the audience was unclear that checking or interfering with an opponent was legal. I wish there was more. When the music stops, the players swim to the inner circle and find a chair to sit in. In a strange twist, the show randomly eliminates a player who has found a seat based on pure luck of the draw. This made me wonder, what is the point of having these people work so hard if some random number strongly influences the winner. Ultimately, in the final round, the three remaining contestants compete to climb up a padded pyramid to the last remaining chair. 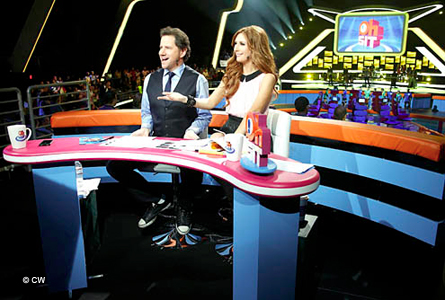 Jamie Kennedy is the co-host to Jessi Cruickshank who sit side-by-side. Tanika Ray is the field host interviewer. Is Jamie Kennedy funny? No. At least not at the tapings I attended. Even he admits it. When one of his jokes falls flat, he would say “make it funny in post”. It’s a cute “out” for a comedian, except in my four day experience on the show, Jamie recycled that joke about eight times-“make it funny in post”. Even worse, one of the female contestant’s last name was “Wang”. Guess how many “wang” jokes Jamie made? Too many. “Big wang, small wang, hard wang”. We get it Jamie. But we are not in 4th grade anymore. 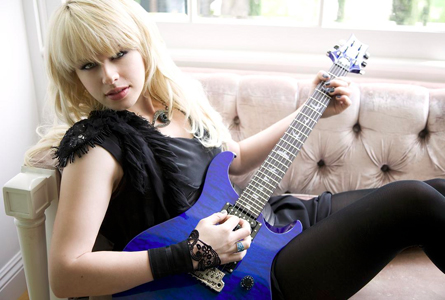 The show does feature musical guests who perform in between contests. I particularly enjoyed beautiful rocker/guitarist Orianthi, who played a great new single. So is this a groundbreaking show? No. But depending on how they put it together, and if they edit out as much of Jamie Kennedy as possible, it might be fun, if not mindless, entertainment. Written and reported by: John Perry

“Chair Mountain” rests above the stage when not in use on “Oh Sit!”